Desmond Henry Browne, Baron Browne of Ladyton (born 22 March 1952) is a British Labour Party politician who was the Member of Parliament (MP) for Kilmarnock and Loudoun from 1997 to 2010. He was a member of the Cabinet of the United Kingdom under Tony Blair and Gordon Brown, until the latter moved him from both Defence and Scottish Secretary in 2008.

Browne was born in Kilwinning, North Ayrshire, lived in Stevenston for the early part of his life, and was educated at the Catholic St Michael's Academy in Kilwinning and later at the University of Glasgow, where he received a degree in law.

He started his legal career in 1974 as an apprentice solicitor with the firm James Campbell & Co. On qualifying in 1976 he became an assistant solicitor with Ross, Harper and Murphy, and was promoted to partner in 1980. He became a partner in McCluskey Browne in 1985 and a council member of the Law Society of Scotland 1988-1992. He was admitted as an advocate in 1993, practising at the Scottish bar until 1997. He worked mainly in child law.

Browne contested the parliamentary seat of Argyll and Bute at the 1992 General Election, and finished in fourth place behind the sitting Liberal Democrat MP Ray Michie. He was elected to the Faculty of Advocates in 1993. Browne was selected to contest the safe Labour seat of Kilmarnock and Loudoun following the retirement of the sitting MP William McKelvey. Browne won the seat at the 1997 General Election with a majority of 7,256. He made his maiden speech on 20 June 1997.

Browne joined the Northern Ireland Affairs Select Committee on his election, and became the Parliamentary Private Secretary (PPS) to the Secretary of State for Scotland Donald Dewar in 1998. After Dewar left the Cabinet in 1999, to seek election as the First Minister of Scotland, Browne remained in post as PPS to the new Secretary of State John Reid. In 2000 he became the PPS to the Minister of State at the Northern Ireland Office.

On 27 November 2009, Browne announced his intention not seek election in the 2010 general election.[2]

Browne currently acts as convenor of the Top Level Group of UK Parliamentarians for Multilateral Nuclear Disarmament and Non-proliferation, established in October 2009.[3] 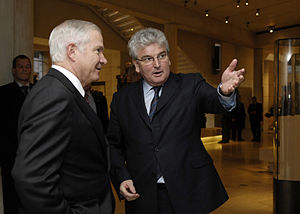 After the 2001 General Election Browne entered Tony Blair's government as the Parliamentary Under Secretary of State at the Northern Ireland Office. He was promoted to Minister of State at the Department for Work and Pensions in 2003, before moving to the Home Office in 2004 as the minister with responsibility for immigration. He joined the Cabinet following the 2005 General Election as the Chief Secretary to the Treasury and became a Member of the Privy Council.

Browne was appointed Secretary of State for Defence on 5 May 2006. An advocate of the UK Trident programme, in 2007 he successfully persuaded Parliament to vote to replace Trident. He came under criticism, however, after allowing the Royal Navy personnel captured by Iran in spring 2007 to sell and publish their stories.[4] Under Tony Blair's premiership, Browne was considered a supporter of the Chancellor of the Exchequer Gordon Brown.[4][5] He received the additional responsibilities of Secretary of State for Scotland in June 2007 after Brown became Prime Minister.

In a free parliamentary vote on 20 May 2008, Browne voted for cutting the upper limit for abortions from 24 to 12 weeks, along with two other Catholic cabinet ministers Ruth Kelly and Paul Murphy.[6] He returned to the backbenches in October 2008 following a cabinet reshuffle.

Browne is vice chairman of the Washington, DC-based Nuclear Threat Initiative, a non-profit, nonpartisan organization founded in 2001 by former U.S. Senator Sam Nunn, who serves as co-chair and CEO, and CNN founder and philanthropist Ted Turner. NTI’s mission is to strengthen global security by reducing the risk of use and preventing the spread of nuclear, biological and chemical weapons.

Des Browne is a signatory of Global Zero (campaign), a non-profit international initiative for the elimination of all nuclear weapons worldwide.[10] Since its launch in Paris in December 2008,[11] Global Zero (campaign) has grown to 300 leaders, including current and former heads of state, national security officials and military commanders, and 400,000 citizens worldwide; developed a practical step-by-step plan to eliminate nuclear weapons; launched an international student campaign with 75 campus chapters in eight countries; and produced an acclaimed documentary film, Countdown to Zero, in partnership with Lawrence Bender and Participant Media.[12]

Controversy over appointment as envoy to Sri Lanka

In February 2009, Browne was appointed by PM Brown as the government's special envoy to Sri Lanka. However, the government of Mahinda Rajapaksa, fighting the LTTE rebel group, rejected Browne's appointment, stating that the British government made the appointment unilaterally, without consultation with the Sri Lankan government.[13]