Dhul-Qarnayn or Zulqarnayn, (Arabic: ذو القرنين‎‎ ḏū al-qarnayn, IPA: [ðuːlqarˈnajn]), "he of the two horns", appears in Surah 18 verses 83-101 of the Qur'an as a figure empowered by Allah to erect a wall between mankind and Gog and Magog, the representation of chaos.[1] In the Islamic apocalyptic tradition the end of the world would be preceded by the release of Gog and Magog from behind the wall, and their destruction by God in a single night would usher in the Day of Resurrection.[2] In traditional scholarship the character is usually identified as Alexander the Great,[3][4][5] who is ascribed similar adventures in the Alexander romance.[6][7] 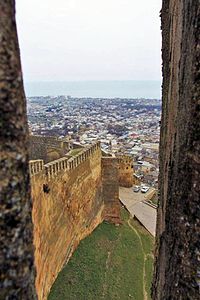 The Caspian Gates in Derbent, Russia, often identified with the Gates of Alexander

Chapter 18 (Surat al-Kahf, "The Cave") was revealed to Muhammad when his tribe, the Quraysh, sent two men to discover whether the Jews, with their superior knowledge of the scriptures, could advise them on whether Muhammad was a true prophet of God. The rabbis told them to ask Muhammad about three things: first about "some young men in ancient times, what was their story"; second "about a man who travelled and reached the east and the west of the earth, what was his story"; and finally they should ask about the "ruh" (soul or spirit). "If he tells you about these things, then he is a prophet, so follow him, but if he does not tell you, then he is a man who is making things up, so deal with him as you see fit." Verses 18:83-98 are the account of Dhul-Qarnayn, the "man who travelled".

Gog and Magog and the wall of Dhul-Qarnayn 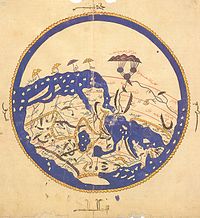 Al-Idrisi's map (South up) shows "Yajooj" and "Majooj" (Gog and Magog) enclosed within dark mountains in the bottom-left edge of the Eurasian landmass.

Muslim and other commentators have identified Dhul Qarnayn with Alexander the Great.[1] According to a legend current in Jewish circles around the time of Christ the Scythians, identified with Gog and Magog, once defeated one of Alexander's generals, upon which Alexander built a wall in the Caucasus mountains to keep them out of civilised lands; the legend went through much further elaboration in the following centuries, and eventually found its way into the Quran through a Syrian version.[8]

Alexander was already known as "the two-horned one" in these early legends.[9] The reasons for this are somewhat obscure. The scholar al-Tabari held that Alexander was called "the two-horned" because he went from one extremity ("horn") of the world to the other,[10] but it may ultimately derive from the image of Alexander wearing the horns of the ram-god Zeus-Ammon, as popularised on coins throughout the Hellenistic Near East.[11] The wall may have reflected a distant knowledge of the Great Wall of China (the 12th century scholar al-Idrisi drew a map for Roger of Sicily showing the "Land of Gog and Magog" in Mongolia), or of various Sassanid Persian walls built in the Caspian area against the northern barbarians, or a conflation of the two.[12]

"Qarn" (horn) also means "period" or "century", and the name Dhul Qarnayn therefore has a symbolic meaning as "He of the Two Ages", the first being the mythological time when the wall is built and the second the age of the end of the world when Allah's shariah, the divine law, is removed and Gog and Magog are to be set loose.[13] Modern Islamic apocalyptic writers, holding to a literal reading, put forward various explanations for the absence of the wall from the modern world, some saying that Gog and Magog were the Mongols and that the wall is now gone, others that both the wall and Gog and Magog are present but invisible.[14]

Dhul-Qarnayn the traveller was a favourite subject for later writers. In one of many Arabic and Persian versions of the meeting of Alexander with the Indian sages, the poet and philosopher Al-Ghazali (Abū Ḥāmid Muḥammad ibn Muḥammad al-Ghazālī, 1058–1111) wrote of how Dhul-Qarnayn came across a people who had no possessions but dug graves at the doors of their houses; their king explained that they did this because the only certainty in life is death. Ghazali's version later made its way into the Thousand and One Nights.[15]

The Sufi poet Rumi (Jalāl ad-Dīn Muhammad Rūmī, 1207-1273), perhaps the most famous of medieval Persian poets, described Dhul Qarnayn's eastern journey. The hero ascends Mount Qof, the "mother" of all other mountains (identified with the Alborz mountains on the northern border of Iran), which is made of emerald and forms a ring encircling the entire Earth with veins under every land. At Dhul Qarnayn's request the mountain explains the origin of earthquakes: when God wills, the mountain causes one of its veins to throb, and thus an earthquake results. Elsewhere on the great mountain Dhul Qarnayn meets Esrafil (the archangel Raphael), standing ready to blow the trumpet on the Day of Judgement.[16]

The Malay language Hikayat Iskandar Zulkarnain was written about Alexander the Great as Dhul-Qarnayn and the ancestry of several Southeast Asian royal families is traced from Iskandar Zulkarnain,[17] through Raja Rajendra Chola (Raja Suran, Raja Chola) in the Malay Annals,[18][19][20] such as the Sumatra Minangkabau royalty.[21] 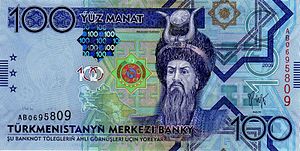 Oghuz Khan pictured with two horns as Zulqarnayn on a 100 Turkmenistan manat banknote.

Although Alexander is most commonly cited as the origin for Dhul-Qarnayn, some Muslim scholars have objected that this cannot be so: Alexander lived only a short time, whereas Dhul-Qarnayn lived for 700 years as a sign of God's blessing; Alexander behaved very badly while Dhul-Qarnayn was a paragon; and Dhul-Qarnayn worshiped only one god, while Alexander worshiped many.[22] Other candidates have been suggested:

According to Tafsir ibn Kathir by Ibn Kathir, a widely used 14th-century commentary on the Quran:

The Quraysh sent An-Nazr bin Al-Haariss and `Uqbah bin Abi Mu`it to the rabbis in Al-Madinah, and told them: `Ask them (the rabbis) about Muhammad, and describe him to them, and tell them what he is saying. They are the people of the first Book, and they have more knowledge of the Prophets than we do.' So they set out and when they reached Al-Madinah, they asked the rabbis about the Messenger of Allah. They described him to them and told them some of what he had said. They said, `You are the people of the Tawrah and we have come to you so that you can tell us about this companion of ours.' They (the rabbis) said, `Ask him about three things which we will tell you to ask, and if he answers them then he is a Prophet who has been sent (by Allah); if he does not, then he is saying things that are not true, in which case how you will deal with him will be up to you. Ask him about some young men in ancient times, what was their story for theirs is a strange and wondrous tale. Ask him about a man who travelled a great deal and reached the east and the west of the earth. What was his story And ask him about the Ruh (soul or spirit) – what is it? If he tells you about these things, then he is a Prophet, so follow him, but if he does not tell you, then he is a man who is making things up, so deal with him as you see fit.[2]

This Surah was sent down in answer to the three questions which the mushriks of Makkah, in consultation with the people of the Book, had put to the Holy Prophet in order to test him. These were: (1) Who were "the Sleepers of the Cave"? (2) What is the real story of Khidr? and (3) What do you know about Dhul-Qarnain? As these three questions and the stories involved concerned the history of the Christians and the Jews, and were unknown in Hijaz, a choice of these was made to test whether the Holy Prophet possessed any source of the knowledge of the hidden and unseen things. Allah, however, not only gave a complete answer to their questions but also employed the three stories to the disadvantage of the opponents of Islam in the conflict that was going on at that time at Makkah between Islam and un-belief.[3]