Norfolk is the son of Miles Francis Stapleton Fitzalan-Howard, 17th Duke of Norfolk, and his wife Anne Mary Teresa Constable-Maxwell.[2] He was educated at Ampleforth College, a Roman Catholic independent school,[2] and then attended Lincoln College, Oxford.[2]

Norfolk worked with various companies, and from 2000 to 2002 was Deputy Earl Marshal. Upon the death of his father in 2002, he inherited the late Duke of Norfolk's peerages and the position of Earl Marshal.[3] He was a Cub Scout whilst at school at Ampleforth College and currently holds two appointments in the Scout Movement. He was until 2010 the President of 1st Arundel (Earl of Arundel's Own) Scout Group, and is still the president of the Arundel & Littlehampton District Scouts. He is also patron of West Sussex County Scouts. In June 2003 he was awarded the Medal of Merit for Services to the Scout Movement. 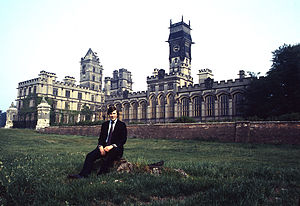 The 18th Duke, outside Carlton Towers, by Allan Warren

The Duke, then the Earl of Arundel, married Georgina Susan Gore on 27 June 1987 at Arundel Cathedral.[2] Together, they have three sons and two daughters:

In April 2011 it was announced that the Duke and Duchess were seeking a trial separation.[4] 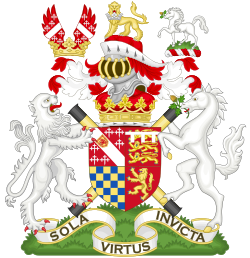 Heraldic achievement of Edward Fitzalan-Howard, the Duke of Norfolk

In 2002, he inherited the Dukedom of Norfolk, as well as a number of earldoms, baronies, hereditary offices, and titles attached to the Dukedom, from his father. His office of Earl Marshal, one of the Great Officers of State, makes him responsible for State occasions, such as coronations[5] and the State Opening of Parliament. He is also, by virtue of this office, one of the hereditary judges of the Court of Chivalry and head of the College of Arms, responsible for heraldry in England and Wales as well as other parts of the Commonwealth of Nations.