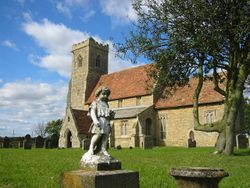 The Friends of Friendless Churches is a registered charity active in England and Wales.[1] It campaigns for and rescues redundant historic churches threatened by demolition, decay, or inappropriate conversion.[2] To that end, as of March 2012, it owns 44 former churches or chapels, 23 of which are in England,[3][4] and 21 in Wales.[5]

The charity was formed in 1957 by Ivor Bulmer-Thomas, a writer, former MP and a high church Anglican,[6] who became its first chairman; its executive committee included prominent politicians and architects. Initially the charity campaigned and obtained grants for the repair and restoration of churches within its remit. The 1968 Pastoral Measure established the Redundant Churches Fund (now called the Churches Conservation Trust), which it was thought would obviate the need for the Friends. However, the Church Commissioners turned down a number of buildings that the executive committee considered worthy of preservation, including Old St Matthew's Church, Lightcliffe, and St Peter's Church, Wickham Bishops. The charity therefore decided in 1972 to change its constitution, allowing it to acquire threatened buildings either by freehold or by lease. The tower of the church at Lightcliffe was the first property to be vested with the charity.[7]

The charity raises money from a number of sources. Since 1999, it has been recognised in Wales as the equivalent of the Churches Conservation Trust (which only covers churches in England), and as a consequence receives full funding for taking Anglican churches into its care. Of this, 70% comes from the State via Cadw, and 30% from the Church in Wales.[8] In England, grants are sometimes obtained from bodies such as English Heritage, as in the case of St Mary's Church, Mundon,[9] but otherwise funds are raised by donations and local money-raising campaigns. Some of the churches have been supported by the formation of local groups of Friends, such as Caldecote Church Friends,[10] and the Friends of St Andrew's, Wood Walton.[11] Members of the public can make donations, become a member of the charity, or leave a legacy in their wills.[12] In addition the charity administers two trusts,[13] one of which, the Cottam Will Trust, was established by Rev S. E. Cottam for "the advancement of religion of objects of beauty to be placed in ancient Gothic churches either in England or Wales".[14]

All the churches owned by the charity are listed buildings, and most are former Anglican churches, either from the Church of England or the Church in Wales, although three were private chapels, one, the Strict and Particular Baptist Chapel, Waddesdon, was a Nonconformist chapel,[2] and another, St Mary of the Angels Church, Brownshill, was a Roman Catholic church.[4] In the financial year ending 31 March 2010, the income of the charity was £475,367, and its expenditure was £509,034.[1] The charity works closely with the Ancient Monuments Society.[2] As of 2013, its patronage is vacant, due to the death of the Marquess of Anglesey, the ecclesiastical patron is Rev Wyn Evans, Bishop of St David's, the president is the Marquess of Salisbury, and the chairman is Roger Evans.[15] In 2007 the charity achieved its 50th anniversary, in celebration of which they published a book entitled Saving Churches, containing details of their history and accounts of their churches.[16]

The list is split into two sections, one for England and the other for Wales. This division reflects the former management of the English churches (with one exception) by the Church of England, the Welsh churches by the Church in Wales, and the different funding arrangements in the two countries.

A The distinctive characteristic of voluntary sources is that the donor receives nothing in return for the money given. It includes grants from government and other charitable sources, as well as public gifts, donations and legacies.[132]
B This is the date of first construction of the existing building.