From Infogalactic: the planetary knowledge core
Jump to: navigation, search
Not to be confused with Gaultier (disambiguation). 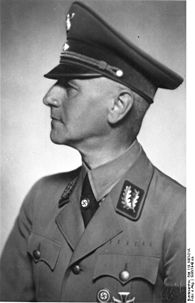 Joachim Albrecht Eggeling was the Nazi Gauleiter of Saxony and Anhalt and the Oberpräsident of the province of Halle-Merseburg.

A Gauleiter (German pronunciation: [ˈɡaʊlaɪtɐ]) was the party leader of a regional branch of the NSDAP (more commonly known as the Nazi Party) or the head of a Gau or of a Reichsgau. Gauleiter was the second highest Nazi Party paramilitary rank, subordinate only to the higher rank Reichsleiter and to the position of Führer. During World War II, the rank of Gauleiter was obtained only by direct appointment from Adolf Hitler. 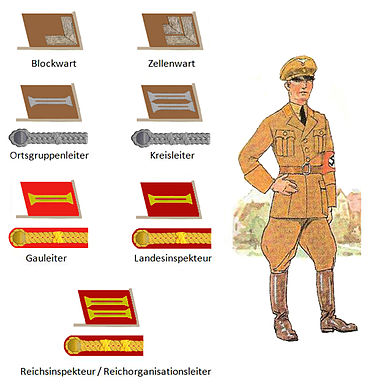 The first use of the term Gauleiter by the Nazi Party was in 1925 after Adolf Hitler refounded the Nazi party following the failed Beer Hall Putsch. The name derives from the German word Leiter (meaning leader) and Gau, which was an old word for a region of the German Reich. The original term Gau may also be traced to the Frankish word Gaugraf, translating closely to the English word "shire". Gau was one of many archaic words from medieval German history that the Nazis revived for their own purposes.[citation needed]

In the earliest days of the term's existence, Gauleiters were heads of election districts during a time period when the Nazis were attempting to gain political representation in the Weimar Republic. Gauleiters oversaw several Politische Leiters (Political Leaders) who assisted the Nazis with election campaigns and hosted senior Nazis (such as Hitler) on campaign tours.[citation needed]

In 1928, a mid-level official known as a Kreisleiter was introduced as an intermediary between the Gauleiter and the Political Leaders. In 1930, as the Nazis attempted to organize on a national level, Gauleiters were themselves subordinated to a new official known as a Landesinspektor, in charge of all Nazi Gaus in a particular German state. It was also at this time that a standard political uniform was created for the Gauleiter, consisting of a brown Nazi Party shirt and Army style collar bars with braided shoulder cords.[citation needed]

In 1933, when the NSDAP took power and established the state of Nazi Germany, Gauleiter became the second-highest Nazi paramilitary rank, just below the new rank of Reichsleiter (National Leader). The Gauleiters now became the heads of the Gauleitung — the system of Nazi political regions set up to mirror the German states. Also at that time Gauleiters adopted the two-leaf collar insignia most often historically associated[by whom?] with the rank.

In theory, a Gauleiter merely functioned as a representative of the Nazi Party who served to coordinate regional Nazi Party events and also served to "advise" the local government. In practice, each Gauleiter had unquestioned authority in his particular area of responsibility. The legal governmental establishment merely existed as a rubber stamp for the Gauleiter. Party control over the civil administration became institutionalized, as in many cases the Gauleiter also held the supreme civil administrative post in his areas (Reichsstatthalter or Oberpräsident). However, since Party Gau boundaries and provincial/state boundaries rarely coincided, this arrangement led to mutually overlapping jurisdictions and added to the administrative chaos typical of Nazi Germany.

Within each Gau were a number of Kreise (districts or counties, singular: Kreis in German), followed by the Ort (municipal) level, which was the lowest in the Nazi Party organization. There were also two additional lower local levels (Block and Zelle), describing Party Cells and local Neighborhood Blocks. By this point,[when?] all political leaders wore official uniforms, with piping and collar-tab background colors indicating the level of the Party (Local, County, Regional, or National) that a Political Leader served. 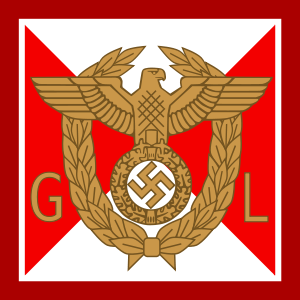 Vehicle insignia for a Gauleiter. 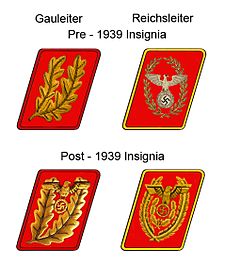 The rank insignia for Gauleiter and Reichsleiter, before and after the 1939 insignia change. 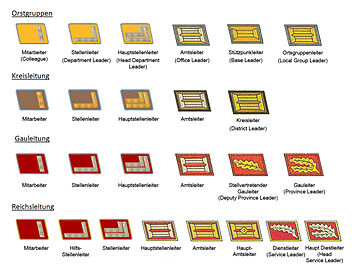 The rank insignia of the Nazi party in the 1930s; the Deputy Gauleiter insignia is displayed as a single oak leaf.

The original insignia for a Gauleiter consisted of Army styled collar tabs, accompanied by a braided shoulder cord worn on a brown Nazi Party shirt. After 1933, the Gauleiters adopted a two oak leaf insignia worn on a brown colored collar patch. The Stellvertreter-Gauleiter (Deputy-Gauleiter) wore a single oak leaf.[citation needed]

By 1939, the entire Nazi Party paramilitary rank system had been overhauled, introducing completely new insignia consisting of pips, bars, and as many as four miniature oak leaves per collar to represent Nazi Party political rank. The Gauleiter insignia, however, was considered too well "entrenched" to change and thus was not incorporated into the new insignia system. Instead, the Gautier continued to wear the pre-war two oak leaf insignia, with the rank seen as existing outside of the hierarchy, senior to all other Nazi Party ranks, with the exception of Reichsleiter. Both Gauleiter and Reichsleiter insignia was modified slightly to display a more pronounced national eagle crest, and both ranks were permitted to wear special party armbands.[citation needed]

Gauleiters also had the right to display a special vehicle flag when traveling, as a status symbol of their position.[citation needed]

Relationship with other insignia

All political leaders working at Gau level had rhomboid collar tabs with red facings (not brown), with a dark wine-red (burgundy) colored piping around the outer edges. Reich-level collar tabs had a bright crimson facing, with gold piping; Kreis level tabs had a dark chocolate brown facing, with white piping, while Ort level tabs had a light brown facing with light blue piping. The political leader collar-tab system was quite complicated and underwent four changes (complexity increasing with each change); the final (fourth) pattern as described above, was introduced around the end of 1938—by this time, with many more job positions within each level; this made the fourth pattern collar tab rank system by far the most complicated of all. The Gauleiter had authority over the district leaders (kreisleiter), who in turn directed chapter leaders (Ortsgruppenleiter). An Ortsgruppe (chapter) encompassed 1500 households—usually a city suburb or a few villages. Chapter leaders directed cell leaders (Zellenleiter), responsible for 160 to 480 households. Zellenleiter had control over the lowest local leaders, Blockleiter, each of whom had charge of one block consisting of 40 to 60 households. The cell and block leaders at the bottom of the hierarchy gave the party a strong hold on the civilian populace.[citation needed]

The positional title immediately subordinate to the Gauleiter was the Stellvertreter-Gauleiter (Deputy Gau Leader). Between 1933 and 1939, this position was an actual rank, annotated by a single oak leaf collar patch, in contrast to the Gauleiter's two. Due to the infighting of Nazi party politics, regulations had been introduced by 1935 to prevent a Deputy Gauleiter from succeeding their own superior, thus discouraging acts of discrediting a Gauleiter in the hopes that the Deputy would take his place.[citation needed]

The World War II era Nazi ranks incorporated the Stellvertreter-Gauleiter rank as a positional title, paired with a corresponding Nazi Party paramilitary rank and doing away with the previous single leaf insignia and the actual rank of Deputy Gauleiter. Thus, with the single leaf political insignia discontinued, Gauleiter was left still displaying two leaves even though a single leaf insignia no longer existed.[citation needed]