From Infogalactic: the planetary knowledge core
Jump to: navigation, search
This article is about Henry "Light-Horse Harry" Lee, the American Revolutionary War officer. For many other individuals with similar names, Harry Lee or Henry Lee.

Henry Lee III (January 29, 1756 – March 25, 1818), also known as Light-Horse Harry Lee, was an early American Patriot who served as the ninth Governor of Virginia and as the Virginia Representative to the United States Congress. During the American Revolution, Lee served as a cavalry officer in the Continental Army and earned the nickname "Light-Horse Harry".[note 1] Henry Lee was the father of Civil War-era Confederate general Robert E. Lee.

Lee was born near Dumfries, Virginia, the son of Henry Lee II (1730–1787) of "Leesylvania" and Lucy Grymes (1734–1792) the "Lowland Beauty". His father was the second cousin of Richard Henry Lee, twelfth President of the Continental Congress. His mother was an aunt of the wife of Virginia Governor Thomas Nelson, Jr. His great-grandmother Mary Bland was also a grand-aunt of President Thomas Jefferson. 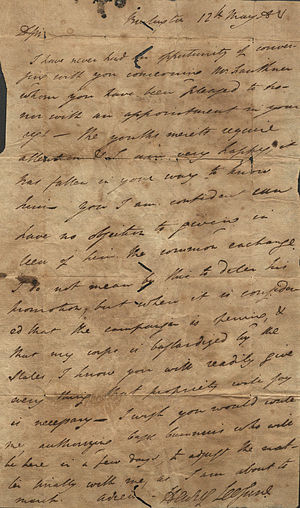 Letter from Henry Lee to Colonel Shreve, Burlington, May 12, 1780

Lee graduated from the College of New Jersey (now Princeton University) in 1773, and began pursuing a legal career. With the outbreak of the Revolutionary War, he instead became a captain in a Virginia dragoon detachment, which was attached to the 1st Continental Light Dragoons. In 1778, Lee was promoted to major and given the command of a mixed corps of cavalry and infantry known as Lee's Legion, with which he won a great reputation as a capable leader of light troops. At the time, highly mobile groups of light cavalry provided valuable service not only during major battles, but also by conducting reconnaissance and surveillance, engaging the enemy during troop movements, disrupting delivery of supplies, doing raiding and skirmishing, and organizing expedition behind enemy lines;[2][3] part of such tactics now is known as guerrilla warfare. In September of the same year, Lee commanded a unit of dragoons which defeated a Hessian regiment at the Battle of Edgar's Lane.

It was during his time as commander of the Legion that Lee earned the sobriquet of "Light-Horse Harry" for his horsemanship. On September 22, 1779 the Continental Congress voted to present Lee with a gold medal—a reward given to no other officer below a general's rank—for the Legion's actions during the Battle of Paulus Hook in New Jersey, on August 19 of that year.[4][5]

Lee was promoted to Lieutenant Colonel and was assigned with his Legion to the southern theater of war. Lee's Legion raided the British outpost of Georgetown, South Carolina with General Francis Marion in January 1781 and helped screen the American army in their Race to the Dan River the following month. Lee united with General Francis Marion and General Andrew Pickens in the spring of 1781 to capture numerous British outposts in South Carolina and Georgia including Fort Watson, Fort Motte, Fort Granby, Fort Galphin, Fort Grierson, and Fort Cornwallis, Augusta, Georgia.[6] They conducted a campaign of terror and intimidation against Loyalists in the region, highlighted in Pyle's Massacre. Lee and his legion also served at the Battle of Guilford Court House, the Siege of Ninety-Six, and the Battle of Eutaw Springs. He was present at Cornwallis's surrender at Yorktown, but left the Army shortly after claiming fatigue and disappointment with his treatment from fellow officers.

In 1794, Lee was summoned by Washington to suppress the Whiskey Rebellion in western Pennsylvania. Lee commanded the 12,950 militiamen sent to quash the rebels; there was no fighting due to peaceful surrender.[7] In 1798, Henry Lee was appointed a major general in the U.S. Army due to a possible war with France. In 1808, he was re-commissioned by President Thomas Jefferson as major-general since war with Great Britain was deemed to break out; Lee organized the Virginia militia. In 1812, he asked President James Madison for a commission due to the Anglo-American War but without success. The same year, he published his Memoirs of the War in the Southern Department of the United States, where he summarized his military experiences during the Revolutionary War.

From 1786 to 1788, Lee was a delegate to the Congress of the Confederation, and in 1788 at the Virginia convention; he favored the adoption of the United States Constitution. From 1789 to 1791, he served in the General Assembly and, from 1791 to 1794, was Governor of Virginia; a new county of Virginia was named after him during his governorship.[8]

From 1799 to 1801, he served in the United States House of Representatives of the Congress. He famously eulogized Washington to a crowd of 4,000 at the first President's funeral on December 26, 1799 as, first in war, first in peace, and first in the hearts of his countrymen.[9]

Between April 8 and 13, 1782, at Stratford Hall, Lee married his second cousin, Matilda Ludwell Lee (1764–1790), who was known as "the Divine Matilda". She was the daughter of Philip Ludwell Lee, Sr., and Elizabeth Steptoe. Matilda had three children before she died in 1790:

On June 18, 1793, Lee married the wealthy Anne Hill Carter (1773–1829) at Shirley Plantation. Anne was the daughter of Charles Carter, Esq., of Shirley, and his wife Ann Butler Moore. She was also a descendant of King Robert II of Scotland through Alexander Lindsay, the 2nd Earl of Crawford.[10] They had six children: 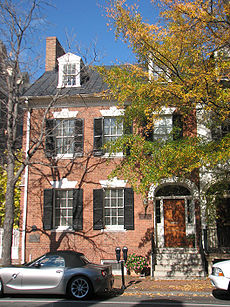 After retiring from public service in 1801, he lived with his family at Stratford Hall and unsuccessfully tried to manage his plantation. The Panic of 1796–1797 and bankruptcy of Robert Morris reduced Lee's fortune. In 1809, he became bankrupt and served one year in debtors' prison in Montross, Virginia; his son, Robert Lee was two years old at the time.[12][13] After release, Lee moved his family to Alexandria, Virginia,

During the civil unrest in Baltimore, Maryland in 1812, Lee received grave injuries while helping to resist an attack on his friend, Alexander Contee Hanson, editor of the Baltimore newspaper, The Federal Republican on July 27, 1812. Hanson was attacked by Democratic-Republican mob because his paper opposed the War of 1812. Lee and Hanson and two dozen other Federalists had taken refuge in the offices of the paper. The group surrendered to Baltimore city officials the next day and were jailed. Laborer George Woolslager led a mob that forced its way into the jail, removed the Federalists, beating and torturing them over the next three hours. All were severely injured, and one Federalist, James Lingan, died.[14][15]

Lee suffered extensive internal injuries as well as head and face wounds, and even his speech was affected. His observed symptoms were consistent with what is now called post-traumatic stress disorder. After unsuccessful convalescence at home, he sailed to the West Indies in an effort to recuperate from his injuries. On his way back to Virginia, he died on 25 March 1818, at Dungeness, on Cumberland Island, Georgia cared about by Nathanael Greene's daughter. Henry "Light-Horse Harry" Lee was buried with full military honors, provided by an American fleet stationed near St. Marys, Georgia, in a small cemetery at Dungeness. In 1913, his remains were moved to the Lee family crypt at Lee Chapel, on the campus of Washington & Lee University in Lexington, Virginia.[16]

The fictional character of Colonel Harry Burwell in the film The Patriot according to screenwriter Robert Rodat have been inspired by the historical exploits of Henry Lee.[17]

In the musical 1776 Lee's nickname is mentioned (anachronistically) during the song "The Lees of Old Virginia," sung by the character of his older cousin Richard Henry Lee.