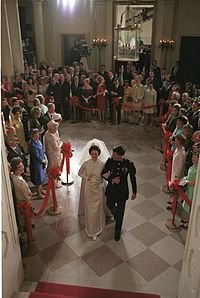 Charles Spittal Robb, known as Chuck Robb (born June 26, 1939), is an American politician and former officer in the United States Marine Corps. He served as the 64th Governor of Virginia from 1982 to 1986, and as a United States senator from 1989 until 2001. In 2004, he co-chaired the Iraq Intelligence Commission.

Charles Robb was born in Phoenix, Arizona, the son of Frances Howard (Woolley) and James Spittal Robb.[1][2] He grew up in the Mount Vernon area of Fairfax County, Virginia. He attended Cornell University before earning a B.A. from the University of Wisconsin–Madison in 1961, where he was a member of the Chi Phi Fraternity.

A United States Marine Corps veteran and honor graduate of Quantico, Robb became a White House social aide.[3] It was there that he met and eventually married Lynda Johnson, the daughter of then-U.S. President Lyndon B. Johnson in a service celebrated by the Right Reverend Gerald Nicholas McAllister. Robb went on to serve a tour of duty in Vietnam, where he commanded a rifle company in combat, and was awarded the Bronze Star.

After the war he earned a J.D. from the University of Virginia Law School in 1973, and clerked for John D. Butzner, Jr., a judge on the Fourth Circuit Court of Appeals. Afterwards he entered private practice with Williams & Connolly.[4][5] 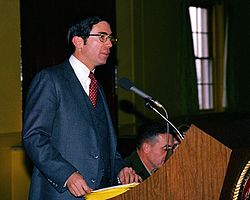 Lt. Governor Robb speaks to guests at a luncheon during the Virginia General Assembly's tour of Marine Corps Base Quantico on February 1, 1981.

In 1977 Robb won election as a Democrat for the lieutenant governorship of Virginia. He served as lieutenant governor from 1978 to 1982 and as governor from 1982 to 1986. In the 1977 election, Robb was the only one of three Democrats running for statewide office to win that year, leaving him as the sole head of a political party that had not won a governor's race in a dozen years. Four years later in 1981, Robb led all three Democrats into office by appealing to conservatives who were disenchanted with his Republican opponent J. Marshall Coleman's maverick style, winning 53.52% of the vote and defeating Coleman. Virginia Democrats again won all three statewide offices in 1985, which was viewed as an endorsement of Robb's leadership while in office. As a campaigner, Robb was capable but reserved. During a time when political communication styles were beginning to favor sound bites, Robb was known for speaking in paragraphs about complex policy issues. He was also noteworthy among his contemporaries for raising substantial sums of campaign funds.

Politically, Robb was a moderate, and known generally as being fiscally conservative, pro-national security, and progressive on social issues. As governor, he balanced the state budget without raising taxes, and dedicated an additional $1 billion for education. He appointed a record number of women and minorities to state positions, including the first African American to the state Supreme Court. He was the first Virginia governor in 25 years to use the death penalty. Robb was instrumental in creating the Super Tuesday primary that brought political power to the Southern states. He was also a co-founder in creating the Democratic Leadership Council. He was a strong vote-getter in Virginia in the 1980s and helped mold a more progressive Virginia Democratic Party than the one that had ruled the state for decades. He was considered a presidential or vice-presidential prospect for a time. 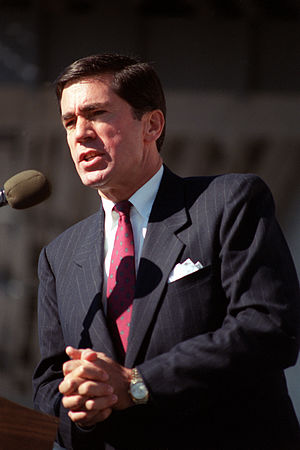 Robb later served as Democratic member of the U.S. Senate from 1989 until 2001. Robb was elected in 1988, defeating Maurice Dawkins with 71% of the vote. Robb ranked annually as one of the most ideologically centrist senators, and he often acted as a bridge between Democratic and Republican members, preferring background deal-making to legislative limelight. His fellow Democrats removed him from the Budget Committee for advocating deeper cuts in federal spending. In 1991 he was one of a handful of Democratic senators to support authorizing the use of force to expel Iraqi forces from Kuwait. That same year he was one of only eleven Democrats to vote in favor of Clarence Thomas's controversial nomination to the Supreme Court. In 1992 he was chairman of the Democratic Senatorial Campaign Committee, and during his term the DSCC raised record amounts of funding to elect seven new Democrats to the Senate. The Democratic victory included the election of four new female senators and the reelection of a fifth in what was called The Year of the Woman. 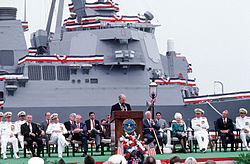 Senator Robb and fellow Virginia Senator John Warner at the commissioning ceremony for the USS Arleigh Burke with Arleigh Burke and wife present and Secretary of Defense Dick Cheney delivering the keynote address on July 4, 1991.

Robb is more liberal on social issues. He voted for the Federal Assault Weapons Ban[6] and against the execution of minors.[citation needed] He was opposed to a constitutional amendment to ban flag burning. In 1993 he supported President Clinton's proposal to adopt the Don't ask, don't tell policy on homosexuals in the armed forces. Three years later Robb was the only senator from a Southern state to oppose the Defense of Marriage Act.[7] In stating his opposition to the bill, which his friends and supporters urged him to support, he said the following: "I feel very strongly that this legislation is wrong. Despite its name, the Defense of Marriage Act does not defend marriage against some imminent, crippling effect. Although we have made huge strides in the struggle against discrimination based on gender, race, and religion, it is more difficult to see beyond our differences regarding sexual orientation. The fact that our hearts don't speak in the same way is not cause or justification to discriminate".[8] Some have speculated that his position on gay rights, along with his positions on other hot-button issues like abortion, only alienated the generally conservative voters of Virginia, contributing to his eventual defeat.[9]

Despite being outspent four to one, Robb narrowly defeated former Iran-Contra figure Oliver North in 1994, a poor year nationally for Democrats. Senator John Warner refused to support North and instead backed third-party candidate and former Virginia Attorney General J. Marshall Coleman, whom Robb had defeated in the 1981 gubernatorial contest. The 1994 Senate campaign was documented in the 1996 film A Perfect Candidate and Brett Morgen's Ollie's Army (where Robb is seen being heckled on the campus of James Madison University). During the campaign, Robb won the endorsement of former Reagan Naval Secretary (and future U.S. senator from Virginia) Jim Webb, and high-profile Republicans such as Elliot Richardson, William Ruckelshaus, and William Colby.[citation needed]

Following his re-election in 1994, Robb continued to promote fiscal responsibility and a strong national defense; he was the only senate Democrat to vote for all items in the GOP's "Contract with America" when they reached the Senate floor, including a Balanced Budget Amendment and a line item veto. He became the only senator to simultaneously serve on all three national security committees: Armed Services, Foreign Relations, and Intelligence. After two terms in the Senate and 25 years in statewide politics, he was defeated in a close race in 2000 by his Republican opponent, George Allen, who was also a former governor. Robb was the only Democratic incumbent senator to be defeated in that election. 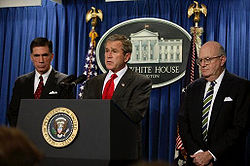 Robb with President George W. Bush and former U.S. Appeals Court Judge Laurence H. Silberman at a White House press conference announcing the formation of the Iraq Intelligence Commission which he would co-chair with Silberman, February 6, 2004.

In 1991, former Miss Virginia USA Tai Collins claimed to have had an affair with Robb seven years earlier, although her allegations were never corroborated and she offered no proof of the affair to reporters. Robb denied having an affair with her, merely admitting to sharing a bottle of champagne and receiving a massage from her in his hotel room on one occasion.[10] Soon after making the allegations, Collins earned an undisclosed amount for posing nude for Playboy magazine.[11] There were also rumors that during the time he was governor, Robb was present at parties in Virginia Beach where cocaine was used. These rumors were never proven, despite intense investigation by reporters and political operatives. He strongly denied this when the issue was raised during his 1988 campaign for the U.S. Senate. Robb so vehemently denied the cocaine allegation that he claimed to have never seen cocaine.[10][12]

In 1991, three of Robb's aides resigned after pleading guilty to misdemeanors related to an illegally recorded cell phone conversation of Virginia Governor (and possible 1994 Senate primary opponent) Doug Wilder. The scandal of the phone conversation morphed into a federal grand jury investigation when it was alleged that Robb's staff and Robb himself conspired to distribute the contents of a mobile phone call taped by an “electronics buff.” Robb and his staff claimed to be unaware of the fact that that conversations on cell phones are protected by the same laws governing land lines. The grand jury concluded its eighteen-month investigation with a vote not to indict Robb. Relations between the Senator and Governor were described in the press as a "feud".[13][14][15]

Following his two terms in the Senate, Robb served on the Board of Visitors at the U.S. Naval Academy, and began teaching at George Mason University School of Law. On February 6, 2004, Robb was appointed co-chair of the Iraq Intelligence Commission, an independent panel tasked with investigating U.S. intelligence surrounding the United States' 2003 invasion of Iraq and Iraq's weapons of mass destruction. In 2006 he was appointed to serve on the U.S. President's Intelligence Advisory Board. He also served on the Iraq Study Group with former Secretary of State James A. Baker III. A New York Times article on October 9, 2006, credited Robb with being the only member of the group to venture outside the American controlled "Green Zone" on a recent trip to Baghdad. Robb has served since 2001 as a member of the Board of Trustees of the MITRE Corporation.[4] Robb serves as a co-leader of the National Security Project (NSP) at the Bipartisan Policy Center.[16] He is also a former member of the Trilateral Commission and is a member of the Council on Foreign Relations, for which he served on the Independent Task Force on Pakistan and Afghanistan.[4]

He is married to Lynda Bird Johnson Robb, daughter of former U.S. President Lyndon B. Johnson. They have three daughters and three grandchildren and reside in McLean, Virginia.[4]