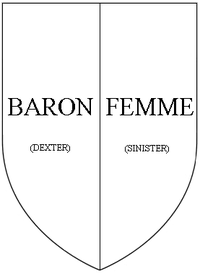 Impalement in heraldry: on the dexter side of the escutcheon, the position of greatest honour, are placed the arms of the husband (baron), with the paternal arms of the wife (femme) on the sinister.

In heraldry, impalement is a form of heraldic combination or marshalling of two coats of arms side by side in one divided heraldic shield or escutcheon to denote a union, most often that of a husband and wife (and in certain cases, same-sex married couples), but also for unions of ecclesiastical, academic/civic and mystical natures. An impaled shield is bisected "in pale", that is by a vertical line.

The husband's arms are shown in the dexter half (on the right hand of someone standing behind the shield, to the viewer's left), being the place of honour, with the wife's paternal arms in the sinister half. For this purpose alone the two halves of the impaled shield are called baron and femme, from ancient Norman-French usage.[1] Impalement is not used when the wife is an heraldic heiress, that is to say when she has no brothers to carry on bearing her father's arms, in which case her paternal arms are displayed on an escutcheon of pretence in the centre of her husband's arms, denoting that the husband is a pretender to the paternal arms of his wife, and that they will devolve upon the couple's heir(s) as quarterings. When a husband has been married more than once, the sinister half of femme is split per fess, that is to say horizontally in half, with the paternal arms of the first wife shown in chief and those of the second wife in base. The sinister side may thus be divided more than twice in similar fashion where required.

The use of impaled arms serves to identify with precision which member of the male line of a family is represented, if the identity of his wife is known, for example from a pedigree. Frequently impaled arms appear sculpted on ancient buildings, thus allowing architectural historians to identify the builder. Impaled arms also appear frequently on monuments in parish churches, and again facilitate identification of the person for whom erected. A convenient and descriptive term for "a heraldic escutcheon showing the impaled arms of a husband and wife" is "a match", and this word was used frequently by, amongst others, Tristram Risdon (d.1640) in his manorial history Survey of Devon. For example: "The north aisle of Swimbridge Church was built by Sir John Mules of Ernsborough, as the inscription in a window, and a proof there once fairly printed and guilded, with the arms and matches of that family, make evident".[2] Also: "(William Hankford) is pourtraited kneeling in his robes together with his own match and the match of some of his ancestors insculpt thereon in brass"[3] (in Monkleigh Church, Devon).

For same-sex married couples, the College of Arms in 2014 decreed that male couples may impale their arms together but that each individual will have distinguished arms and crests of their own (i.e. the arms of a given partner will have his own arms on dexter and his partner's in sinister with his own crest; his partner's will be the opposite). Slightly different rules applies to female couples and heraldic heiresses.[4] 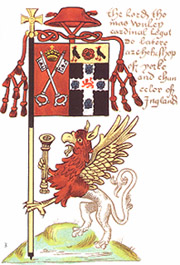 Banner of Cardinal Wolsey as Archbishop of York. His personal arms in sinister (to viewer's right) are impaled with the arms of the See of York in dexter (to viewer's left), the position of honour.

In ecclesiastical heraldry, a bishop's familial arms are impaled with those of his diocese or see, with the dexter position of greater honour being occupied by the arms of the see, and the incumbent's arms in sinister.

Heads of educational establishments, for example of Oxbridge colleges, many of whom were historically former clergymen, traditionally impaled their personal and college arms, during their term of office. Likewise, this privilege extends to senior civic office holders, for example Mayors, Masters of Livery Companies, etc. 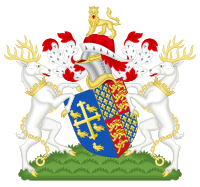 A rare use of impalement is that where a mystical union is believed to exist between the two parties. Such was the case with King Richard II (1377-1399) who had a particular devotion to the saint King Edward the Confessor. Although the saint lived in the pre-heraldic era, his attributed arms were employed by King Richard in impaling his own royal Arms of Plantagenet, as an outward sign of such a mystical quasi-marriage. The Confessor's arms were shown in the dexter position of honour.