Field Marshal John Campbell, 2nd Duke of Argyll, 1st Duke of Greenwich KG KT (10 October 1680[1] – 4 October 1743), styled Lord Lorne from 1680 to 1703, was a Scottish nobleman and senior commander in the British Army. He served on the contintent in the Nine Years' War and fought at the Battle of Kaiserwerth during the War of the Spanish Succession. He went on to serve as a brigade commander during the later battles of the War of the Spanish Succession. Next he was given command of all British forces in Spain at the instigation of the Harley Ministry; after conducting a successful evacuation of the troops from Spain, he became Commander-in-Chief, Scotland. During the Jacobite Rebellion, he led the government army against the Jacobites led by the Earl of Mar at the Battle of Sheriffmuir. He went on to serve as Lord Steward and then Master-General of the Ordnance under the Walpole–Townshend Ministry.

Born the son of Archibald Campbell, 1st Duke of Argyll and Elizabeth Campbell (née Tollemache, daughter of Sir Lionel Tollemache, 3rd Baronet), Campbell was privately tutored first by Walter Campbell of Dunloskin, then by John Anderson of Dumbarton and, finally, by Alexander Cunningham.[2] He was commissioned, after his father given William III some encouragement, as colonel of Lord Lorne's Regiment of Foot, a regiment entirely raised by the Argyll family, on 7 April 1694.[2] Campbell served briefly on the contintent in the Nine Years' War before the regiment was disbanded in 1698.[3] He also served under the Duke of Marlborough at the Battle of Kaiserwerth in April 1702 during the War of the Spanish Succession.[3] He was appointed a Knight of the Order of the Thistle later that year.[2]

Campbell succeeded his father as Duke of Argyll and Chief of Clan Campbell and also became colonel of the 4th Troop of Horse Guards in 1703.[3] For the help he gave the King persuading the Parliament of Scotland to support the Act of Union, he was created Earl of Greenwich and Baron Chatham in 1705.[4] He then returned to the continent and, having been promoted to major-general early in 1706, served as a brigade commander under Marlborough at the Battle of Ramillies in May 1706 and at the Siege of Ostend in June 1706.[4] After being appointed colonel of Prince George of Denmark's Regiment in 1707, he went on to command a brigade at the Battle of Oudenarde in July 1708 and at the Siege of Lille in Autumn 1708.[4] Promoted to lieutenant general in April 1709, he also took part in the Siege of Tournai in June 1709 and the Battle of Malplaquet in September 1709.[4]

Appointed a Knight of the Order of the Garter in December 1710, Campbell was promoted to full general and given command of all British forces in Spain at the instigation of the Harley Ministry in January 1711.[4] After conducting a successful evacuation of the troops from Spain, he became Commander-in-Chief, Scotland in 1712.[4] By 1713, however, Campbell had become critical of the ministry, and he joined the Whig opposition in making speeches against the government's policy on the Malt Tax.[4] In July 1714, during Queen Anne's last illness, Campbell gave his full support to the Hanoverian succession.[4] He was rewarded with the colonelcy of the Royal Horse Guards in June 1715.[4]

During the Jacobite Rebellion, Campbell led the government army against the Jacobites led by the Earl of Mar at the Battle of Sheriffmuir in November 1715.[4] The battle was indecisive but favoured the government strategically. He was rewarded by being created Duke of Greenwich in 1719.[4] He went on to become Lord Steward in 1721 and then Master-General of the Ordnance in June 1725[5] under the Walpole–Townshend Ministry. He also became colonel of the Queen's Regiment of Horse in August 1726[6] and, having been appointed Governor of Portsmouth in November 1730,[7] he was restored to the colonelcy of the Royal Horse Guards in August 1733.[8]

Campbell died at Sudbrook Park, Petersham on 4 October 1743 and was buried in Westminster Abbey; his grave is marked by a small lozenge stone to the north east of Henry VII's tomb. A large monument, designed by the French sculptor, Louis-François Roubiliac, was erected for him in the south transept and unveiled in 1749.[1] 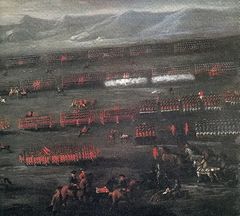 The Battle of Sheriffmuir where Campbell led the government army

Campbell married first, Mary Brown, daughter of John Brown and Ursula Duncombe, in 1701: they separated soon after the marriage and she died in 1717 and was buried in Westminster Abbey.[1] He married secondly, Jane Warburton, daughter of Thomas Warburton and Anne Williams and maid of honour to Queen Anne, in 1717: Jane died in 1767 and was buried with him in Westminster Abbey. He had four daughters who reached maturity: Caroline Townshend, 1st Baroness Greenwich, Lady Elizabeth Campbell, Lady Anne Campbell and Lady Mary Coke.[13]