From Infogalactic: the planetary knowledge core
Jump to: navigation, search
For other uses, see Delos (disambiguation).

The island of Delos (/ˈdiːlɒs/; Greek: Δήλος [ˈðilos]; Attic: Δῆλος, Doric: Δᾶλος), near Mykonos, near the centre of the Cyclades archipelago, is one of the most important mythological, historical and archaeological sites in Greece. The excavations in the island are among the most extensive in the Mediterranean; ongoing work takes place under the direction of the French School at Athens and many of the artifacts found are on display at the Archaeological Museum of Delos and the National Archaeological Museum of Athens.

Delos had a position as a holy sanctuary for a millennium before Olympian Greek mythology made it the birthplace of Apollo and Artemis. From its Sacred Harbour, the horizon shows the two conical mounds (image below) that have identified landscapes sacred to a goddess in other sites: one, retaining its pre-Greek name Mount Kynthos,[1] is crowned with a sanctuary of Zeus.

Established as a culture center, Delos had an importance that its natural resources could never have offered. In this vein Leto, searching for a birthing-place for Artemis and Apollo, addressed the island:

Delos, if you would be willing to be the abode of my son Phoebus Apollo and make him a rich temple –; for no other will touch you, as you will find: and I think you will never be rich in oxen and sheep, nor bear vintage nor yet produce plants abundantly. But if you have the temple of far-shooting Apollo, all men will bring you hecatombs and gather here, and incessant savour of rich sacrifice will always arise, and you will feed those who dwell in you from the hand of strangers; for truly your own soil is not rich. 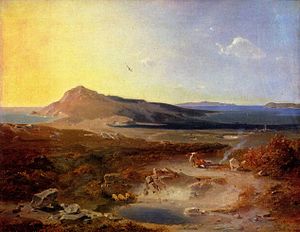 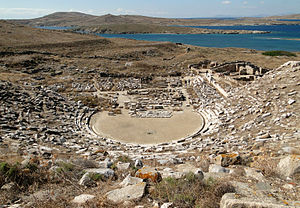 Investigation of ancient stone huts found on the island indicate that it has been inhabited since the 3rd millennium BC. Thucydides identifies the original inhabitants as piratical Carians who were eventually expelled by King Minos of Crete.[2] By the time of the Odyssey the island was already[why?] famous as the birthplace of the twin gods Apollo and Artemis (although there seems to be some confusion of Artemis' birthplace being either Delos or the island of Ortygia). Indeed, between 900 BC and AD 100, sacred Delos was a major cult centre, where Dionysus is also in evidence as well as the Titaness Leto, mother of the above-mentioned twin deities. Eventually acquiring Panhellenic religious significance, Delos was initially a religious pilgrimage for the Ionians.

A number of "purifications" were executed by the city-state of Athens in an attempt to render the island fit for the proper worship of the gods. The first took place in the 6th century BC, directed by the tyrant Pisistratus who ordered that all graves within sight of the temple be dug up and the bodies moved to another nearby island. In the 5th century, during the 6th year of the Peloponnesian war and under instruction from the Delphic Oracle, the entire island was purged of all dead bodies. It was then ordered that no one should be allowed to either die or give birth on the island due to its sacred importance and to preserve its neutrality in commerce, since no one could then claim ownership through inheritance. Immediately after this purification, the first quinquennial festival of the Delian games were celebrated there.[3]

After the Persian Wars the island became the natural meeting-ground for the Delian League, founded in 478 BC, the congresses being held in the temple (a separate quarter was reserved for foreigners and the sanctuaries of foreign deities.) The League's common treasury was kept here as well until 454 BC when Pericles removed it to Athens.[4]

The island had no productive capacity for food, fiber, or timber, with such being imported. Limited water was exploited with an extensive cistern and aqueduct system, wells, and sanitary drains. Various regions operated agoras (markets).

Strabo states that in 166 BC the Romans converted Delos into a free port, which was partially motivated by seeking to damage the trade of Rhodes, at the time the target of Roman hostility.

Roman traders came to purchase tens of thousands of slaves captured by the Cilician pirates or captured in the wars following the disintegration of the Seleucid Empire. It became the center of the slave trade, with the largest slave market in the larger region being maintained here.

The island was attacked in 88 BC by the troops of Mithridates VI of Pontus, a staunch enemy of Rome, who killed some 20,000 of the resident Romans. Another devastating attack was by pirates in 69 BC. Before the end of the 1st century BC, trade routes had changed; Delos was replaced by Puteoli as the chief focus of Italian trade with the East, and as a cult-centre too it entered a sharp decline.

Due to the above history, Delos - unlike other Greek islands - did not have an indigenous, self-supporting community of its own. As a result, in later times it became uninhabited.

Since 1872 the École française d'Athènes ("French School of Athens") has been excavating the island, the complex of buildings of which compares with those of Delphi and Olympia.

In 1990, UNESCO inscribed Delos on the World Heritage List, citing it as the "exceptionally extensive and rich" archaeological site which "conveys the image of a great cosmopolitan Mediterranean port".[5] 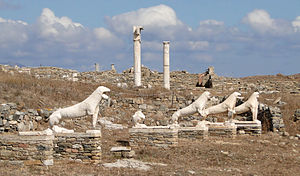 The Terrace of the Lions. 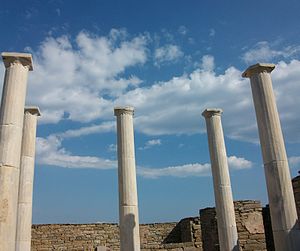 The 2001 Greek census reported a population of 14 inhabitants on the island. The island is administratively a part of the municipality of Mýkonos.