From Infogalactic: the planetary knowledge core
Jump to: navigation, search
This article is about the Scottish burgh. For other uses, see Peebles (disambiguation).

Peebles (Scottish Gaelic: Na Pùballan)[1] is a royal burgh in Tweeddale (of which it is the county town), within the Scottish Borders region. According to the 2001 Census, the population was 8,159.[2]

Initially a market town, Peebles played a role in the woollen industry of the Borders up until the 1960s. Although one woollen mill remains operational in the town, the industrial composition of Peebles has changed; the town is now home to many people who commute to work in Edinburgh, as well as being a popular tourist destination, especially in the summer. In the mid-to-late 19th century, this included health tourism, centring on hydropathic establishments, which over time morphed into a hotel format, with Peebles Hydro Hotel being one of the few survivors of that era.[3] Notable buildings in the town include the Old Parish Church of Peebles and Neidpath Castle. Other local attractions include a museum and the Kailzie Gardens. It has won multiple awards for an excellent range of shops on its High Street. 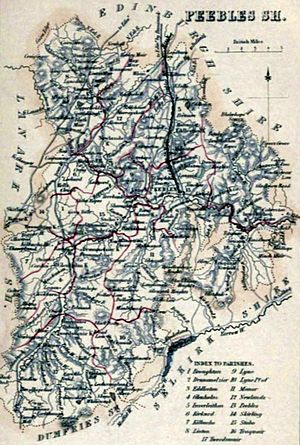 Peebles lies at the confluence of the River Tweed and Eddleston Water (locally called "the Cuddy"). The Tweed flows west to east, and the Eddleston flows from the north, turning to flow south-west 300 yards before the confluence. This south-westerly turn demarcates a raised triangular piece of land, open to the east but contained by the rivers to the south and north. The name is generally accepted to come from the Brythonic pebyll tents, signifying a temporary settlement.[4]

The eastern side was defended in historic times by a town wall, which ran in an east facing arc, through which the road to Glentress passed at the East Gate. The road passing through this gate, the Eastgate, is one of four gates in Peebles, the others being Northgate, Bridgegate (where the Eddleston Water was crossed to the north of town), and Ludgate (the western gate of the town), now called Young Street.

At the junction of Eastgate and Northgate roads, where the Eastgate becomes High Street, is an ancient market cross. The present-day market is held in the station car park, to the north and south ends of which are the remains of the town wall. Peebles High Street runs parallel with the Tweed along the spine of a ridge, at the west end of which is the parish church.

The oldest building in Peebles is the tower of St Andrew's Church. The church was founded in 1195. It was destroyed (along with many other Borders abbeys and priories) by the soldiers of Henry VIII. The stones of the ruins were pilfered for many other local buildings leaving only the tower standing amongst the gravestone of the churchyard. Another ancient church in the town is the Cross Kirk, founded in 1261. Although now mainly ruins, the Cross Kirk plays a prominent part in the local festival.

The annual local festival in Peebles is called the Beltane, and involves (as with many Borders festivals) a Common Riding. The Beltane, proclaimed at the cross, culminates with the crowning of the Beltane Queen (a girl chosen from one of three local primary schools) along with her court, including the likes of the First and Second Courtiers, Sword Bearer and Standard Bearer; on the steps in front of the parish church. The adult principal of the festival is the Cornet, a local young man chosen by the organising committee on a basis of being considered worthy of representing the town, who then carries the town standard for a year.

To the west of the town is Neidpath Castle, which can be reached on foot through Hay Lodge Park, the route offering spectacular views of the castle. The castle is now closed to the public.

On the south side of High Street are the old burgh offices. These incorporate the town's library, art gallery and local museum. The building occupied by these are called the Chambers Institution, being deeded to the town by William Chambers, a member of the Chambers publishing family who originated in the town. Chambers' house can be found on the oldest street in Peebles - Biggiesknowe.

Peebles is no longer connected to the railway network. In years past, the Symington, Biggar and Broughton Railway had lines that connected Peebles to Edinburgh and Galashiels.

Historically Peebles and the Scottish borders have been the location of many textiles businesses. Still today, March Street Mills is the location of Robert Noble along with its sister company Replin Fabrics.

The arms carved in stone at Northgate

The arms of the Royal Burgh of Peebles features three salmon on a red field. The heraldic blazon is: Gules, three salmons counter-naiant in pale proper. The motto is Contra Nando Incrementum, Latin for "There is growth by swimming against the stream", referring to the annual migration of salmon up the River Tweed in order to breed. The one salmon facing forwards and two facing backwards represent the fact that for every salmon that goes up the river, two come back to the sea.

The arms are very old, first appearing on the town's mercat cross, which was built some time before 1320.[5] Originally the colours were not standardised, the background variously appearing as blue, green or red. The latter seems to have been most common, and it was red that was chosen when the arms were formally granted by Lord Lyon in 1894, following a petition from the town clerk, William Buchan, who had previously received a letter from A. C. Fox-Davies questioning the burgh's right to use the arms.[6]

After the abolition of the old Scottish burghs in 1975, the arms became redundant. In 1988 they were regranted to the Royal Burgh of Peebles and District Community Council, who continue to use the arms today, with the addition of a community council's coronet.[7] The traditional province of Ångermanland in Sweden also has a very similar coat of arms, but with a blue background.

Traditionally, a person born in Peebles was called a gutterbluid, although few people can now claim that distinction as Peebles no longer has a hospital. Most babies are born in Edinburgh or Borders General Hospital at Melrose. 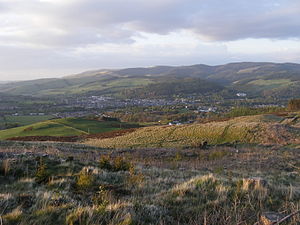 Peebles overview from Cademuir Hill, the Hydro Hotel can be seen on the right

In 2014 Creative Scotland named Peebles the most creative place of its size in Scotland, presenting the town with a Creative Place Award and £100,000 to enhance arts events, festivals and arts commissions. Most arts performances take place in the Eastgate Theatre on the High Street which has a year-round programme of music, drama, dance, talks and classes for children and adults. The town also has four major annual festivals - the Beltane Festival, Peebles Arts Festival, Tweedlove Bike Festival and Imaginarium.

Just south of the town Glentress Forest is the base for some of the best mountain biking in the country, attracting over 300,000 visitors a year. For walkers the John Buchan Way starts at the west side of the town. Many make full use of the huge variety of hotels, guest houses and campsites in and around the town.

Peebles has an 18 hole golf course, located at the upper end of Kirkland Street. The golf club was formerly owned and run by the local council before being taken over and run by its own members.

Peebles has three primary schools: Kingsland (now relocated to Neidpath Road from its original position on Rosetta Road), Priorsford and the Roman Catholic Halyrude Primary School. Peebles also has the largest secondary school in the Borders, Peebles High School, which is attended by pupils from all over Tweeddale.

In 2005, a study by the New Economics Foundation ranked Peebles as the best town in Scotland (second best in the UK, after Hebden Bridge in Yorkshire), for range of independent shops and 'home town identity'.[8]

Most common surnames in Peebles at the time of the United Kingdom Census of 1881,[9] by order of incidence: