From Infogalactic: the planetary knowledge core
(Redirected from Quirinal)
Jump to: navigation, search 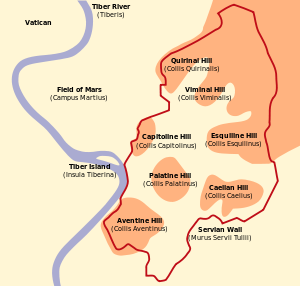 The Quirinal Hill (Latin: Collis Quirinalis; Italian: Quirinale [kwiriˈnaːle]) is one of the Seven Hills of Rome, at the north-east of the city center. It is the location of the official residence of the Italian Head of State, who resides in the Quirinal Palace; by metonymy "the Quirinal" has come to stand for the Italian President. The Quirinal Palace has an extension of 1.2 million square feet.

It was originally part of a group of hills that included Collis Latiaris, Mucialis (or Sanqualis), Salutaris. These are now lost due to building in the 16th century and later.[1]

According to Roman legend, the Quirinal Hill was the site of a small village of the Sabines, and king Titus Tatius would have lived there after the peace between Romans and Sabines. These Sabines had erected altars in the honour of their god Quirinus (naming the hill by this god).[citation needed]

Tombs from the 8th century BC to the 7th century BC that confirm a likely presence of a Sabine settlement area have been discovered; on the hill, there was the tomb of Quirinus, which Lucius Papirius Cursor transformed into a temple for his triumph after the third Samnite war. Some authors consider it possible that the cult of the Capitoline Triad (Jove, Minerva, Juno) could have been celebrated here well before it became associated with the Capitoline Hill. The sanctuary of Flora, an Osco-Sabine goddess, was here too.[2]

According to Livy, the hill first became part of the city of Rome, along with the Viminal Hill, during the reign of Servius Tullius, Rome' sixth king, in the 6th century BC.[3]

In 446 BC, a temple was dedicated on the Quirinal in honour of Semo Sancus Dius Fidius, and it is possible that this temple was erected over the ruins of another temple. Augustus, too, ordered the building of a temple, dedicated to Mars. On a slope of the Quirinal were the extensive gardens of Sallust.

On the Quirinal Hill Constantine ordered the erection of his baths, the last thermae complex erected in imperial Rome. These are now lost, having been incorporated into Renaissance Rome, with only some drawings from the 16th century remaining.

In the Middle Ages, the Torre delle Milizie and the convent of St. Peter and Domenic were built, and above Constantine's building was erected the Palazzo Rospigliosi; the two famous colossal marble statues of the "Horse Tamers", generally identified as the Dioscuri with horses, which now are in the Piazza Quirinale, were originally in this Palazzo. They gave to the Quirinal its medieval name Monte Cavallo, which lingered into the 19th century, when the hill was transformed beyond all recognition by urbanization of an expanding capital of a united Italy. In the same palazzo were also the two statues of river gods that Michelangelo moved to the steps of Palazzo Senatorio on the Capitoline Hill.

According to the political division of the center of Rome, the Hill belongs to the rione Trevi. 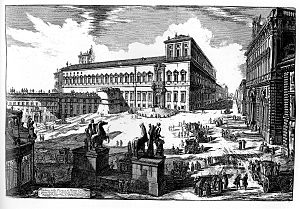 A mid-18th century etching of the Palazzo del Quirinale by Giovanni Battista Piranesi: The colossal Roman "Horse Tamers" or Dioscuri are in the foreground, but the obelisk from the Mausoleum of Augustus (erected 1781 – 1786) has not yet been set up between them. 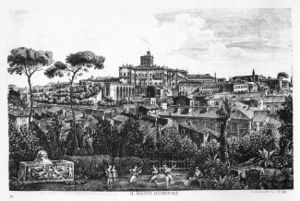 An etching of the Hill, crowned by the mass of the Palazzo del Quirinale, from a series 'I Sette Colli di Roma antica e moderna published in 1827 by Luigi Rossini (1790–1857): His view, from the roof of the palazzo near the Trevi Fountain that now houses the Accademia di San Luca, substituted an imaginary foreground garden for the repetitious roofscape.
Further information: Palazzo del Quirinale

The healthy[4] cool air of the Quirinal Hill attracted aristocrats and papal families that built villas where the gardens of Sallust had been in antiquity. A visit to the villa of Cardinal Luigi d'Este in 1573 convinced Pope Gregory XIII to start the building of a summer residence the following year, in an area considered healthier than the Vatican Hill or Lateran: His architects were Flaminio Ponzio and Ottaviano Nonni, called Mascherino; under Pope Sixtus V, works were continued by Domenico Fontana (the main facade on the Piazza) and Carlo Maderno, and by Gian Lorenzo Bernini for Pope Clement XII. Gardens were conceived by Maderno. In the 18th century, Ferdinando Fuga built the long wing called the Manica Lunga, which stretched 360 meters along via del Quirinale. In front lies the sloping Piazza del Quirinale where the pair of gigantic Roman marble "Horse Tamers" representing Castor and Pollux, found in the Baths of Constantine, were re-erected in 1588. In Piranesi's view, the vast open space is unpaved. The Palazzo del Quirinale was the residence of the popes until 1870, though Napoleon deported both Pius VI and Pius VII to France, and declared the Quirinale an imperial palace. When Rome was united to the Kingdom of Italy, the Quirinale became the residence of the kings until 1946.

Today, the Palazzo hosts the offices and the apartments of the Head of State and, in its long side along via XX Settembre (the so-called Manica Lunga), the apartments that were furnished for each visit of foreign monarchs or dignitaries.

In Piranesi's view, the palazzo on the right is the Palazzo della Sacra Consulta, originally a villa built upon the ruins of the Baths of Constantine, which was adapted by Sixtus V as a civil and criminal court. The present façade was built in 1732–1734 by the architect Ferdinando Fuga on the orders of Pope Clement XII Corsini, whose coat-of-arms, trumpeted by two Fames, still surmounts the roofline balustrade, as in Piranesi's view. It formerly housed Mussolini's ministry of colonial affairs. 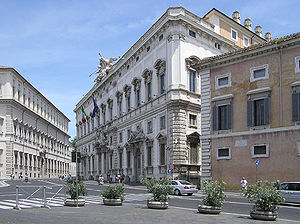 The Constitutional Court of Italy in Palazzo della Consulta, is among the Quirinal Hill government buildings in Rome.

The hill is the site of other important monuments and buildings. Many of those built during the baroque period reflect the personal and spiritual aspirations of powerful local families: