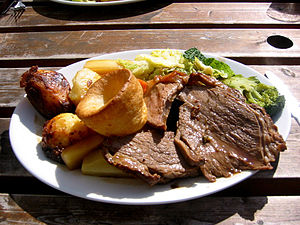 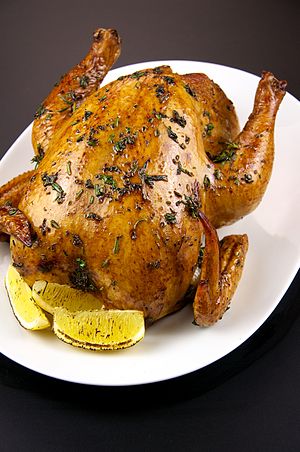 Roasting is a cooking method that uses dry heat where hot air envelops the food, cooking it evenly on all sides with temperatures of at least 150 °C (~300 °F) from an open flame, oven, or other heat source. Roasting can enhance flavor through caramelization and Maillard browning on the surface of the food. Roasting uses indirect, diffused heat (as in an oven), and is suitable for slower cooking of meat in a larger, whole piece.[1] Meats and most root and bulb vegetables can be roasted. Any piece of meat, especially red meat, that has been cooked in this fashion is called a roast. A roast joint of meat can take one, two, even three hours to cook—the resulting meat is tender. Also, meats and vegetables prepared in this way are described as "roasted", e.g., roasted chicken or roasted squash.

For roasting, the food may be placed on a rack, in a roasting pan or, to ensure even application of heat, may be rotated on a spit or rotisserie.[2] If a pan is used, the juice can be retained for use in gravy, Yorkshire pudding, etc. During oven roasting, hot air circulates around the meat, cooking all sides evenly. There are several plans for roasting meat: low-temperature cooking, high-temperature cooking, and a combination of both. Each method can be suitable, depending on the food and the tastes of the people.

In general, in either case, the meat is removed from heat before it has finished cooking and left to sit for a few minutes, while the inside cooks further from the residual heat content, known as carry over cooking.

The objective in any case is to retain as much moisture as possible, while providing the texture and color. As meat cooks, the structure and especially the collagen breaks down, allowing juice to come out of the meat. So meat is juiciest at about medium rare while the juice is coming out. During roasting, meats and vegetables are frequently basted on the surface with butter, lard, or oil to reduce the loss of moisture by evaporation. In recent times, plastic oven bags have become popular for roasts. These cut cooking times and reduce the loss of moisture during roasting, but reduce flavor development from Maillard browning, somewhat more like (boiled or steamed) stew or pot roast. They are particularly popular for turkeys.[4] 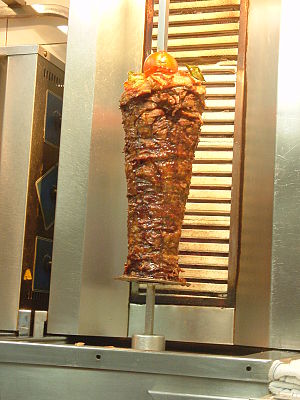 Shwarma prepared on a rotating spit

From vegetables, to meats and seafood, roasting can be used to cook a variety of food groups. Roasting help preserve nutrients, too.

Until the late 19th century, roasting by dry heat in an oven was called baking. Roasting originally meant turning meat or a bird on a spit in front of a fire. It is one of the oldest forms of cooking known.

Traditionally recognized roasting methods consist only of baking and cooking over or near an open fire. Grilling is normally not technically a roast, since a grill (gridiron) is used. Barbecuing and Smoking differ from roasting because of the lower temperature and controlled smoke application. Grilling can be considered as a low fat food preparation, as it allows any fat in the food to drip away. 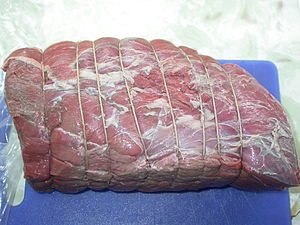 Before the invention and widespread use of stoves, food was primarily cooked over open flames from a hearth. To roast meat racks with skewers, or, if accessible, complicated gear arrangements, would be utilized to turn the piece(s). In the past, this method was often associated with the upper class and special occasions rather than customary meal times because it required freshly killed meat and close attention during cooking. It was easy to ruin the meat’s taste with a smoky fire or negligence to rotate it at regular intervals. Thus, elite families who were able to afford quality meat, appointed this task to servants or invested in technology like automatic turning devices. With further technological advances, cooking came to accommodate new opportunities. By the 1860s, working families were able to afford low-priced stove models that became sufficiently available. However, the key element of observation during roasting became difficult and dangerous to do with the coal oven. Hence, traditional roasting disappeared as kitchens became no longer equipped for this custom and soon thereafter, “baking” came to be called “roasting”.[5]

Roasting can be applied to a wide variety of meat. In general, it works best for cooking whole chickens, turkey, and leaner cuts of lamb, pork, and beef. The aim is to highlight the flavor of the meat itself rather than a sauce or stew, as it is done in braising or other moist-heat methods. Many roasts are tied with string prior to roasting, often using the reef knot or the packer's knot.[6] Tying holds them together during roasting, keeping any stuffing inside, and keeps the roast in a round profile, which promotes even cooking.[7]

Red meats such as beef, lamb, and venison, and certain game birds are often roasted to be "pink" or "rare", meaning that the center of the roast is still red. Roasting is a preferred method of cooking for most poultry, and certain cuts of beef, pork, or lamb. Although there is a growing fashion in some restaurants to serve "rose pork", temperature monitoring of the center of the roast is the only sure way to avoid foodborne disease.[8]

In Britain, Ireland, and Australia a roast of meat may be referred to as a joint, or a leg, if it is a leg.

Some vegetables, such as potatoes, zucchini, pumpkin, turnips, parsnips, cauliflower, asparagus, squash, and peppers lend themselves to roasting as well. Roasted chestnuts are also a popular snack in winter. 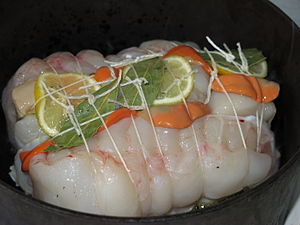 Roasting of burbot with scallops (France) to be cooked

It is also possible to roast fish as meat.