Stockholm syndrome, or capture-bonding, is a psychological phenomenon in which hostages express empathy and sympathy and have positive feelings toward their captors, sometimes to the point of defending and identifying with the captors. These feelings are generally considered irrational in light of the danger or risk endured by the victims, who essentially mistake a lack of abuse from their captors for an act of kindness.[1][2] The FBI's Hostage Barricade Database System shows that roughly eight percent of victims show evidence of Stockholm syndrome.[3]

Stockholm syndrome can be seen as a form of traumatic bonding, which does not necessarily require a hostage scenario, but which describes "strong emotional ties that develop between two persons where one person intermittently harasses, beats, threatens, abuses, or intimidates the other."[4] One commonly used hypothesis to explain the effect of Stockholm syndrome is based on Freudian theory. It suggests that the bonding is the individual's response to trauma in becoming a victim. Identifying with the aggressor is one way that the ego defends itself. When a victim believes the same values as the aggressor, they cease to be perceived as a threat.[5]

Stockholm syndrome is sometimes erroneously referred to as Helsinki syndrome.[6][7] 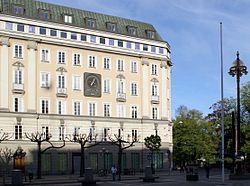 Stockholm syndrome is named after the Norrmalmstorg robbery of Kreditbanken at Norrmalmstorg in Stockholm, Sweden. During the crime, several bank employees were held hostage in a bank vault from August 23 to 28, 1973, while their captors negotiated with police. During this standoff, the victims became emotionally attached to their captors, rejected assistance from government officials at one point, and even defended their captors after they were freed from their six-day ordeal.[8]

The term was coined by the criminologist and psychiatrist Nils Bejerot, consultant psychiatrist to the police when it happened. He called it "Norrmalmstorgssyndromet" (Swedish), directly translated as The Norrmalmstorg Syndrome, but then later became known abroad as the Stockholm syndrome.[9] It was originally defined by psychiatrist Frank Ochberg to aid the management of hostage situations.[10]

In the view of evolutionary psychology, "the mind is a set of information-processing machines that were designed by natural selection to solve adaptive problems faced by our hunter-gatherer ancestors."[11]

One of the "adaptive problems faced by our hunter-gatherer ancestors", particularly females, was being abducted by another band. Life in the "human environment of evolutionary adaptiveness" (EEA) is thought by researchers such as Israeli military historian Azar Gat to be similar to that of the few remaining hunter-gatherer societies. "Deadly violence is also regularly activated in competition over women. . . . Abduction of women, rape, ... are widespread direct causes of reproductive conflict ..."[12] Being captured[13] and having their dependent children killed might have been fairly common.[14] Women who resisted capture in such situations risked being killed.[15]

Azar Gat argues that war and abductions (capture) were typical of human pre-history.[12] When selection is intense and persistent, adaptive traits (such as capture-bonding) become universal to the population or species.

Partial activation of the capture-bonding psychological trait may lie behind battered-wife syndrome,[16] military basic training, fraternity hazing, and sex practices such as sadism/masochism or bondage/discipline.[17] Being captured by neighbouring tribes was a relatively common event for women in human history, if anything like the recent history of the few remaining tribes. In some of those tribes (Yanomamo, for instance) practically everyone in the tribe is descended from a captive within the last three generations. Perhaps as high as one in ten of females were abducted and incorporated into the tribe that captured them.[17]

Extension to other scenarios

There is no widely agreed upon diagnostic criteria to identify Stockholm Syndrome and it does not appear in the DSM or the ICD. However, studies have found evidence of emotional bonding with captors in a variety of hostage or abusive situations, including abused children and women, POWs, cult members, incest victims, and concentration camp prisoners. In Nazi Germany in the 1930s some Jews were allegedly shouting "Down with Us"[18] and supported Hitler's policies.[19] The syndrome is encouraged in crime situations because it can increase the hostages' chances for survival, but those experiencing it are usually not very cooperative during rescue or prosecution. Several symptoms of Stockholm Syndrome have been identified in the following: positive feelings toward the controller, negative feelings toward the rescuers, supportive behavior by the victim helping the abuser, and lack of desire by the victim to be rescued.[20][21]

A converse of Stockholm syndrome called Lima syndrome has been proposed, in which abductors develop sympathy for their hostages. There are many reasons why Lima Syndrome can develop in abductors. Sometimes when there are multiple abductors, one or more of them will start to disagree with what they are doing and influence one another. An abductor may also have second thoughts or experience empathy towards their victims.

Lima Syndrome was named after an abduction at the Japanese Embassy in Lima, Peru, in 1996, when members of a militant movement took hostage hundreds of people attending a party at the official residence of Japan's ambassador. Within a few hours, the abductors had set free most of the hostages, including the most valuable ones, owing to having sympathy towards them.[22][23]

Bel Canto by Ann Patchett is a fictionalization loosely based on the Japanese embassy hostage crisis, in which a sort of Stockholm syndrome intertwines with the Lima syndrome associated with that event.

In the video game PAYDAY 2, there is an available skill in the "Mastermind" tree called Stockholm Syndrome, which gives civilians (who are typically held hostage if not freed by police units or left unattended long enough) a chance to revive downed players and give them more weapon ammunition.

In the popular video game Grand Theft Auto V, there is a section of the game when protagonist Trevor Phillips kidnaps Patricia, wife of Martin Madrazo. The two begin a romance and protagonist Michael refers to this as 'Stockholm Syndrome.'

In the original PlayStation game Lunar: Silver Star Story, the heroine Luna is kidnapped by the antagonist Ghalion. Later in the game it is found out that Ghalion manipulated Luna for his own dark magic.

In music, many bands have published songs named "Stockholm Syndrome", such as That Handsome Devil, Yo La Tengo, Muse, blink-182, CLMD, and One Direction.