From Infogalactic: the planetary knowledge core
(Redirected from Tulip Era in the Ottoman Empire)
Jump to: navigation, search
This article is about a historic era during the Ottoman Empire. For the period of extremely high tulip bulb prices in the Netherlands, see Tulip mania.

The Tulip Period or Tulip Era (21 July 1718 - 28 September 1730) (Ottoman Turkish: لاله دورى, Turkish: Lâle Devri) is a period in Ottoman history from the Treaty of Passarowitz on 21 July 1718 to the Patrona Halil Revolt on 28 September 1730. This was a relatively peaceful period, during which the Ottoman Empire can be said to have begun to orient itself towards Europe.

The name of the period derives from the tulip craze among the Ottoman court society. Cultivating this culturally ambiguous emblem had become a celebrated practice.[1] The Tulip Period illustrated the conflicts brought by early modern consumer culture and was a shared material symbolism. During this period the elite and high-class society of the Ottoman Period had established an immense fondness for the tulip, which were utilized in various occasions. Tulips defined nobility and privilege, both in terms of goods and leisure time.

Under the guidance of Sultan Ahmed III’s son-in-law, Grand Vizier Nevşehirli Damat İbrahim Pasha, the Ottoman Empire embarked on new policies and programs during this period, which established the first Ottoman language printing press, and promoted commerce and industry.

The Grand Vizier was concerned with improving trade relations and enhancing commercial revenues, which would help to explain the return to gardens and the more public style of the Ottoman court during this period. The Grand Vizier was himself very fond of tulip bulbs, setting an example for Istanbul’s elite who started to cherish the tulip’s endless variety in paint and celebrate its seasonality as well.[2]

The Ottoman standard of dress and its commodity culture incorporated their passion for the tulip. Within Istanbul, one could find tulips from the flower markets to the plastic arts to silks and textiles. (page 86) Tulip bulbs could be found everywhere; the demand grew within the elite community where they could be found in homes and gardens.

Therefore, the tulip is a symbol with mythical appeal, which can be found from Ottoman palaces to their clothing, which sustains a memory of the Ottoman Empire’s social past. The tulip can be seen as a romantic monument representing the wealthy and elite, and the fragility of despotic rule.[3] 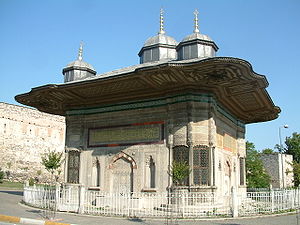 The Tulip period saw a flowering of arts, culture and architecture. Generally the style of architecture and decoration became more elaborate, being influenced by the Baroque period in movement. A classic example is the Fountain of Ahmed III in front of Topkapi Palace in Istanbul. The architectural style is a fusion of classical Islamic elements with baroque European ones, making it into distinct Ottoman architecture of the 18th century.

The tulip was also praised in poetry and motifs used in paintings. To this day in modern Turkey the tulip is still considered the embodiment of perfection and beauty. Turkish Airlines decorates its planes with a painting of a tulip on its fuselage.[4]

Important Figures During This Period

Tulip prices began to rise in the last decades of the 17th century and peaked in 1726–1727 before state intervention. This reflected the demand for the inflated value of the rare bulbs and escalating demands for flowers in the elite’s palaces and gardens.[7]

Tulip mania demonstrated the state's power to regulate the economy by increasing the prices for bulbs. Courtiers at the time forwarded a petition to denounce the practice of flower sellers, whom they perceived to be taking advantage of the elite by raising the prices of the bulbs. This led to the process of issuing inventories of flowers and price lists to the judge of Istanbul for enforcement.[8]