The Constitution of the Republic of Turkey (Turkish: Türkiye Cumhuriyeti Anayasası), also known as the Constitution of 1982, is Turkey's fundamental law. It establishes the organisation of the government and sets out the principles and rules of the state's conduct along with its responsibilities towards its citizens. The constitution also establishes the rights and responsibilities of the latter while setting the guidelines for the delegation and exercise of sovereignty that belongs to the Turkish people.

The first constitution of the Ottoman Empire was adopted in 1876 and revised in 1908.

Since its founding, the modern Turkish state has been governed under four documents:

The current constitution was ratified by popular referendum during the military junta of 1980-1983. Since its ratification in 1982, the current constitution has overseen many important events and changes in the Republic of Turkey, and it has been modified many times to keep up with global and regional geopolitical conjunctures. The last significant amendments were made in 2010.[2] (A minor amendment to Article 59, on the permissible means for challenging "decisions of sport federations relating to administration and discipline of sportive activities," was made in March 2011.[3]

The Constitution asserts that Turkey is a secular (2.1) and democratic (2.1), republic (1.1) that derives its sovereignty (6.1) from the people. The sovereignty rests with the Turkish Nation, who delegates its exercise to an elected unicameral parliament, the Turkish Grand National Assembly. 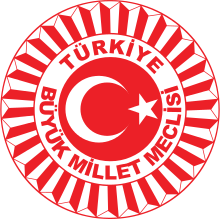 Seal of the Assembly

Part Two of the constitution is the bill of rights. Article Twelve guarantees "fundamental rights and freedoms", which are defined as including the:

Article Five of the Constitution sets out the raison d'être of the Turkish state, namely "to provide the conditions required for the development of the individual’s material and spiritual existence".

Many of these entrenched rights have their basis in international bills of rights, such as the Universal Declaration of Human Rights, which Turkey was one of the first nations to ratify in December 1948.[4]

Besides the provisions establishing Turkey as a secular state, Article 10 goes further with regards to equality of its citizens by prohibiting any discrimination based on their "language, race, color, sex, political opinion, philosophical convictions or religious beliefs" and guaranteeing their equality in the eyes of the law. Borrowing from the French Revolutionary ideals of the nation and the Republic, Article 3 affirms that "The Turkish State, with its territory and nation, is an indivisible entity. Its language is Turkish". Article 66 defines a Turkish civic identity: "everyone bound to the Turkish state through the bond of citizenship is a Turk".

Article Seven provides for the establishment of a unicameral parliament as the sole organ of expression of sovereign people. Article Six of the Constitution affirms that "sovereignty is vested fully and unconditionally in the nation" and that "the Turkish Nation shall exercise its sovereignty through the authorised organs as prescribed by the principles laid down in the Constitution". The same article also rules out the delegation of sovereignty "to any individual, group or class" and affirms that "no person or agency shall exercise any state authority which does not emanate from the Constitution". Article 80 (A80) affirms the principle of national sovereignty: "members of the Turkish Grand National Assembly represent, not merely their own constituencies or constituents, but the Nation as a whole".

Part Three, Chapter One (Articles 75-100) sets the rules for the election and functioning of the Turkish Grand National Assembly as the legislative organ, as well as the conditions of eligibility (A76), parliamentary immunity (A83) and general legislative procedures to be followed. Per Articles 87 and 88, both the government and the parliament can propose laws, however it is only the parliament that has the power to enact laws (A87) and ratify treaties of the Republic with other sovereign states (A90).

The President of the Republic is elected by the parliament and has a largely ceremonial role as the Head of State, "representing the Republic of Turkey and the unity of the Turkish Nation" (A104).

Article Nine affirms that the "judicial power shall be exercised by independent courts on behalf of the Turkish Nation". Part Four provides the rules relating to their functioning and guarantees their full independence (A137-140). The judiciary conforms to the principle of separation of powers not only through its independence from the executive and legislative branches of government but by being divided into two entities, Administrative Justice and Judicial Justice, with the Danıştay (The Council of State) the highest court for the former (A155) and Yargıtay (High Court of Appeals) the highest court for the latter (154).

Part Four, Section Two allows for a Constitutional Court that rules on the conformity of laws and governmental decrees to the Constitution. It may hear cases referred by the President of the Republic, the government, the members of Parliament (A150) or any judge before whom a constitutional issue has been raised by a defendant or a plaintiff (A152). The Constitutional Court has the right to both a priori and a posteriori review, and can invalidate whole laws or decrees and ban their application for all future cases (A153).

See also: Legal system of the Republic of Turkey and Constitutional Court of Turkey

The Turkish Armed Forces (TAF) are subordinate to the President, in the capacity of Commander-in-Chief. The Chief of General Staff of the TAF is responsible to the Prime Minister in the exercise of his functions, and the latter is responsible, along with the rest of the Council of Ministers, before the parliament (A117).

National Security Council is an advisory organization, comprising the Chief of General Staff and the four main Commanders of the TAF and select members of the Council of Ministers, to develop the "national security policy of the state" (A118).

In Article 175, it also sets out the procedure of its own revision and amendment by either referendum or a qualified majority vote of 2/3 in the National Assembly. It does not recognize the right to popular initiatives: Only the members of Parliament can propose modifications to the Constitution.

A revision of the Constitution was approved on September 13, 2010 by a 58 percent approval given by the 39 million people who voted. The change would allow the National Assembly to appoint a number of high-court judges, would reduce the power of the military court system over the civilian population and would improve human rights. The changes also remove the immunity from prosecution the former leaders of the early 1980s military coup gave themselves.[5]

The Constitution of 1982 has been criticized as limiting individual cultural and political liberties in comparison with the previous constitution of 1961. Per the Treaty of Lausanne which established the Turkish Republic, legally, the only minorities are Greeks, Armenians and Jews, which also have certain privileges not recognized to other ethnic communities, per the treaty. According to the European Union, the constitution denies the fundamental rights of the Kurdish population because some articles, especially the article 42 are against minority rights.[6] The Council of Europe’s European Commission against Racism and Intolerance (ECRI) published its third report on Turkey in February 2005. The commission has taken the position that the parliament should revise Article 42 of the Constitution, which prohibits the teaching of any language other than Turkish as a first language in schools.[7] The Turkish constitutional principle of not allowing the teaching of other languages as first languages in schools to its citizens, other than the official one is criticized by the EU, human rights organizations and minorities of Turkey.[6] The Kurds, who comprise more than 20% of the Turkish population are not allowed to get education in their mother tongue because of this article.[6]

Currently Circassian, Kurdish, Zaza, Laz languages can be chosen as lessons in some public schools.[8][9][10] Since 2003, private courses teaching minority languages can be offered, but the curriculum, appointment of teachers, and criteria for enrollment are subject to significant restrictions. All private Kurdish courses were closed down in 2005 because of bureaucratic barriers and the reluctance of Kurds to have to "pay to learn their mother tongue."[11] In 2015, only 28 schools provided Kurdish language as a selective course. Also, neither private nor public schools are still allowed to use Kurdish language or other languages than Turkish as a first language.[6]

The constitution grants freedom of expression, as declared in Article 26. Article 301 of the Turkish penal code states that "A person who publicly denigrates the Turkish Nation, the Republic or the Grand National Assembly of Turkey, shall be punishable by imprisonment of between six months and three years" and also that "Expressions of thought intended to criticise shall not constitute a crime".

Orhan Pamuk's remark "One million Armenians and 30,000 Kurds were killed in these lands, and nobody but me dares talk about it." was considered by some to be a violation of Article 10 of the Constitution and led to his trial in 2005. The complaint against Orhan Pamuk was made by a group of lawyers led by Kemal Kerinçsiz and charges filed by a district prosecutor under the Article 301 of the Turkish Penal Code. Pamuk was later released and charges annulled by the justice ministry on a technicality. The same group of lawyers have also filed complaints against other lesser-known authors on the same grounds. Kerinçsiz was indicted in the 2008 Ergenekon investigation, along with many others.

Influence of the military

The constitution is also criticised for giving the Turkish Armed Forces, who see themselves as the guardians of the secular and unitary nature of the Republic along with Atatürk's reforms, too much influence in political affairs via the National Security Council.[citation needed]