The Twenty-fifth Amendment (Amendment XXV) to the United States Constitution deals with succession to the Presidency and establishes procedures both for filling a vacancy in the office of the Vice President, as well as responding to Presidential disabilities. It supersedes the ambiguous wording of Article II, Section 1, Clause 6 of the Constitution, which does not expressly state whether the Vice President becomes the President or Acting President if the President dies, resigns, is removed from office or is otherwise unable to discharge the powers of the presidency.[1] The Twenty-fifth Amendment was adopted on February 10, 1967.[2]

Section 1. In case of the removal of the President from office or of his death or resignation, the Vice President shall become President.

Section 2. Whenever there is a vacancy in the office of the Vice President, the President shall nominate a Vice President who shall take office upon confirmation by a majority vote of both Houses of Congress.

The Twenty-fifth Amendment in the National Archives

That clause was unclear regarding Presidential succession and inability; it did not state who had the power to declare a President incapacitated.[1] Also, it did not provide a mechanism for filling a Vice Presidential vacancy prior to the next Presidential election. The vagueness of this clause caused difficulties many times before the Twenty-fifth Amendment's adoption:

All of these incidents made it evident that clearer guidelines were needed.[1] There were two proposals for providing those guidelines.

In 1963, Senator Kenneth Keating of New York proposed a Constitutional amendment which would have enabled Congress to enact legislation providing for how to determine when a President is disabled, rather than, as the Twenty-fifth Amendment does, having the Constitution so provide.[7] This proposal was based upon a recommendation of the American Bar Association in 1960.[8]

The text of the proposal read:[9]

Senators raised concerns that the Congress could either abuse such authority[10] or neglect to enact any such legislation after the adoption of this proposal.[11] Tennessee Senator Estes Kefauver (the Chairman of the Senate Judiciary Committee's Subcommittee on Constitutional Amendments), a long-time advocate for addressing the disability question, spearheaded the effort until he died of a heart attack on August 10, 1963.[12][13]

With President John F. Kennedy’s assassination, the need for a clear way to determine presidential succession, especially with the new reality of the Cold War and its frightening technologies,[14] forced Congress into action.[14] The new President, Lyndon B. Johnson, had once suffered a heart attack,[15] and the next two people in line for the presidency were Speaker of the House John McCormack,[16] who was 71 years old,[14] and Senate President pro tempore Carl Hayden,[16] who was 86 years old.[14] Senator Birch Bayh succeeded Kefauver as Chairman of the Subcommittee on Constitutional Amendments and set about advocating for a detailed amendment dealing with presidential succession.[14]

On January 6, 1965, Senator Birch Bayh proposed in the Senate and Representative Emanuel Celler (Chairman of the House Judiciary Committee) proposed in the House of Representatives what became the Twenty-fifth Amendment. Their proposal specified the process by which a President could be declared disabled, thereby making the Vice President an Acting President, and how the President could regain the powers of his office. Also, their proposal provided a way to fill a vacancy in the office of Vice President before the next presidential election. This was as opposed to the Keating–Kefauver proposal, which did not provide for filling a vacancy in the office of Vice President prior to the next presidential election or itself provide a process for determining presidential disability. In 1964, the American Bar Association endorsed the type of proposal which Bayh and Celler advocated.[17]

The Congress proposed the Twenty-fifth Amendment on July 6, 1965, and the amendment was ratified by the following states:[2]

Ratification was completed on February 10, 1967. The following states subsequently ratified the amendment:

The following states have not ratified the amendment: 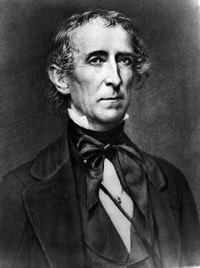 John Tyler, the first to assume the Presidency following the death of a President. His legitimacy was initially contested, and it was unknown whether he should be considered merely an acting president.

Section 1 codified the "Tyler Precedent" regarding when a President is removed from office, dies, or resigns. In any of these situations, the Vice President immediately becomes President.

Prior to the Twenty-fifth Amendment's adoption, a Vice Presidential vacancy remained until the start of the next presidential term. The Vice Presidency has been vacant several times due to death, resignation, or succession to the Presidency. Often these vacancies lasted for several years.

Under Section 2, whenever there is a vacancy in the office of Vice President, the President nominates a successor who becomes Vice President if confirmed by a majority vote of both Houses of the Congress.

Section 4 is the only part of the amendment that has never been invoked.[20] It allows the Vice President, together with a majority of either "the principal officers of the executive departments" (i.e., the Cabinet) or of "such other body as Congress may by law provide", to declare the President disabled by submitting a written declaration to the President pro tempore of the Senate and the Speaker of the House of Representatives. As with Section 3, the Vice President would become Acting President.

However, the President may again submit a written declaration of recovery to the President pro tempore and the Speaker of the House. That declaration could be responded to by the Acting President and the Cabinet in the same way as stated earlier. The allotted 21-day Congressional procedure would start again. 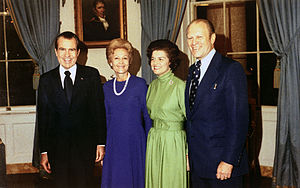 The United States Senate voted 92–3 to confirm Ford on November 27 and, on December 6, the House of Representatives did the same by a vote of 387–35. Ford was sworn in later that day before a joint session of the United States Congress.[21]

Succession of Gerald Ford to Presidency (1974) 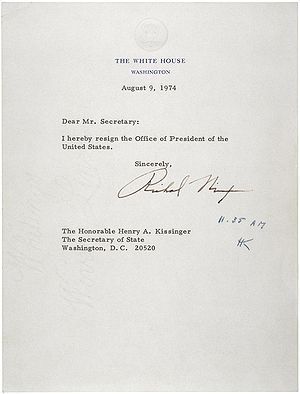 On July 12, 1985, President Ronald Reagan underwent a colonoscopy, during which a pre-cancerous lesion called a villous adenoma was discovered. Upon being told by his physician (Dr. Edward Cattow) that he could undergo surgery immediately or in two to three weeks, Reagan elected to have it removed immediately.

That afternoon, Reagan consulted with White House counsel Fred Fielding by telephone, debating whether to invoke the amendment and, if so, whether such a transfer would set an undesirable precedent. Fielding and White House Chief of Staff Donald Regan recommended that Reagan transfer power and two letters doing so were drafted: the first letter specifically invoked Section 3 of the Twenty-fifth Amendment; the second only mentioned that Reagan was mindful of this provision. At 10:32 a.m. on July 13, Reagan signed the second letter and ordered its delivery to the appropriate officers as required under the amendment.[24]

Books such as The President Has Been Shot: Confusion, Disability and the 25th Amendment, by Herbert Abrams, and Reagan's autobiography, An American Life, argue President Reagan's intent to transfer power to Vice President Bush was clear. Fielding himself adds:

I personally know he did intend to invoke the amendment, and he conveyed that to all of his staff and it was conveyed to the VP as well as the President of the Senate. He was also very firm in his wish not to create a precedent binding his successor.

On June 29, 2002, President George W. Bush underwent a colonoscopy and chose to invoke Section 3 of the amendment, temporarily transferring his powers to Vice President Dick Cheney. The medical procedure began at 7:09 a.m. EDT and ended at 7:29 a.m. EDT. Bush woke up twenty minutes later, but did not resume his presidential powers and duties until 9:24 a.m. EDT after the president's doctor, Richard Tubb, conducted an overall examination. Tubb said he recommended the additional time to make sure the sedative had no aftereffects. Unlike Reagan's 1985 letter, Bush's 2002 letter specifically cited Section 3 as the authority for the transfer of power.[24]

There are two documented instances in which invocation of Section 4 of the Twenty-fifth Amendment was considered, both of which involved the 40th President of the United States, Ronald Reagan.

Following the attempted assassination of Ronald Reagan on March 30, 1981, Vice President George Bush did not assume the presidential powers and duties as Acting President under Section 4. In 1995, Birch Bayh, the primary sponsor of the amendment in the Senate, wrote that Section 4 should have been invoked.[25] Reagan was unable to invoke Section 3 because he was in surgery. Bush did not invoke Section 4, because he was on a plane returning from Texas. By the time Bush arrived in Washington, Reagan was out of surgery.[26]

Upon assuming the role of White House Chief of Staff in 1987, Howard Baker was advised by his predecessor's staff to be prepared for a possible invocation of the Twenty-fifth Amendment due to Reagan's perceived laziness and ineptitude.[27]

According to the PBS program American Experience,

What Baker's transition team was told by Donald Regan's staff that weekend shocked them. Reagan was 'inattentive, inept,' and 'lazy,' and Baker should be prepared to invoke the 25th Amendment to relieve him of his duties.

Reagan biographer Edmund Morris stated in an interview aired on the program,

The incoming Baker people all decided to have a meeting with him on Monday, their first official meeting with the President, and to cluster around the table in the Cabinet room and watch him very, very closely to see how he behaved, to see if he was indeed losing his mental grip.

Morris went on to explain,

Reagan who was, of course, completely unaware that they were launching a death watch on him, came in stimulated by the press of all these new people and performed splendidly. At the end of the meeting, they figuratively threw up their hands realizing he was in perfect command of himself.[27]