From Infogalactic: the planetary knowledge core
Jump to: navigation, search
For other uses, see Nixon in China. 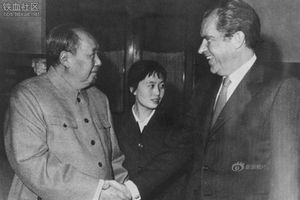 U.S. President Richard Nixon's 1972 visit to the People's Republic of China was an important step in formally normalizing relations between the United States (U.S.) and the People's Republic of China (PRC). It marked the first time a U.S. president had visited the PRC, which at that time considered the U.S. one of its foes, and the visit ended 25 years of separation between the two sides.

Before even being elected president, Richard Nixon had talked of the need for better relations with the PRC, with which the U.S. did not maintain diplomatic relations as it recognized the government of the Republic of China on Taiwan as the government of China. Early in his first term, Nixon and National Security Adviser Henry Kissinger began sending subtle overtures hinting at warmer relations to the PRC government. After a series of these overtures by both countries, Kissinger flew on secret diplomatic missions to Beijing, where he met with Premier Zhou. On July 15, 1971, the President announced that he would visit the PRC the following year.

Occurring from February 21 to 28, 1972, the visit allowed the American public to view images of China for the first time in over two decades. Throughout the week the President and his most senior advisers engaged in substantive discussions with the PRC, including a meeting with Chairman Mao Zedong, while First Lady Pat Nixon toured schools, factories and hospitals in the cities of Beijing, Shanghai and Hangzhou with the large American press corps in tow. Nixon dubbed the visit "the week that changed the world."

The repercussions of the Nixon visit were vast, and included a significant shift in the Cold War balance, pitting the PRC with the U.S. against the Soviet Union. "Nixon going to China" has since become a metaphor for an unexpected or uncharacteristic action by a politician.

Improved relations with the Soviet Union and the PRC are often cited as the most successful diplomatic achievements of Nixon’s presidency.[1] After World War II, Americans saw relations between the United States and the Soviet Union deteriorating, the Soviets consolidating communist allies over much of Eastern Europe, and the potential victory of Communist forces in the Chinese Civil War. Many Americans felt concern that communists might dominate schools or labor unions.[2]

The rationale for opening up China was for the U.S. to gain more leverage over relations with the Soviet Union. Resolving the Vietnam War was a particularly important factor. National Security Council staffer (and later U.S. Ambassador to China) Winston Lord noted:

"First, an opening to China would give us more flexibility on the world scene generally. We wouldn’t just be dealing with Moscow. We could deal with Eastern Europe, of course, and we could deal with China, because the former Communist Bloc was no longer a bloc. Kissinger wanted more flexibility, generally. Secondly, by opening relations with China we would catch Russia’s attention and get more leverage on them through playing this obvious, China card. The idea would be to improve relations with Moscow, hoping to stir a little bit of its paranoia by dealing with China, never getting so engaged with China that we would turn Russia into a hostile enemy but enough to get the attention of the Russians. This effort, in fact, worked dramatically after Kissinger’s secret trip to China.
Thirdly, Kissinger and Nixon wanted to get help in resolving the Vietnam War. By dealing with Russia and with China we hoped to put pressure on Hanoi to negotiate seriously. At a maximum, we tried to get Russia and China to slow down the provision of aid to North Vietnam somewhat. More realistically and at a minimum, we sought to persuade Russia and China to encourage Hanoi to make a deal with the United States and give Hanoi a sense of isolation because their two, big patrons were dealing with us. Indeed, by their willingness to engage in summit meetings with us, with Nixon going to China in February, 1972, and to Moscow in May, 1972, the Russians and Chinese were beginning to place a higher priority on their bilateral relations with us than on their dealings with their friends in Hanoi."[3]

One of the main reasons Richard Nixon became the 1952 vice-presidential candidate on the Eisenhower ticket was his strong anti-communist stance. Despite this, in 1972 Nixon became the first U.S. president to visit mainland China while in office.[4] Ulysses S. Grant visited China on a world tour after leaving office. Herbert Hoover lived in China briefly in 1899 before becoming President and could speak Mandarin. Dwight Eisenhower made a state visit to Taiwan in 1960, during the period when the United States recognized the Republic of China government in Taipei as the sole government of China. 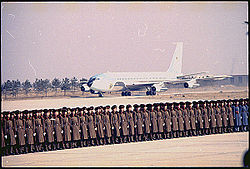 Air Force One landing in Beijing on February 21, 1972.
"I remember that when we landed at Beijing Airport, maybe naively I was somewhat disappointed at what I considered the strained nature of the Chinese reception. We had expected thousands of people in cheering crowds, after 22 years of hostilities. There was a very small crowd, including a Chinese Army honor guard. Looking out the window at the welcoming ceremony, I thought that it was a fairly gray day, too. This didn’t look like a monumental event, as it ought to have been." - Winston Lord[3]

In July 1971, President Nixon's National Security Advisor Henry Kissinger secretly visited Beijing during a trip to Pakistan, and laid the groundwork for Nixon's visit to China. Transcripts of White House meetings and once confidential documents show Nixon began working to open a channel of communication with Beijing from his first day in the White House.[5] 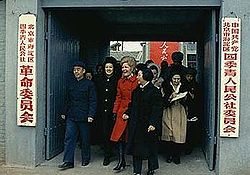 Pat Nixon in the People's Republic of China.

From February 21 to 28, 1972, U.S. President Richard Nixon traveled to Beijing, Hangzhou, and Shanghai. Almost as soon as the American president arrived in the Chinese capital, Chairman Mao summoned him for a quick meeting. Secretary of State William P. Rogers was excluded from this meeting and the only other American present besides Kissinger was Winston Lord. To avoid embarrassing Rogers, Lord was cropped out of all the official photographs of the meeting.[6]

Although Nixon was in China for a week, this would be his only meeting with the top Chinese leader.

Unknown to Nixon and the rest of the American diplomats at the time, Mao was in poor health and he had been hospitalized for several weeks up to only nine days before Nixon's arrival. Nevertheless, Mao felt well enough to insist to his officials that he would meet with Nixon upon his arrival. Upon being introduced to Nixon for the first time, Mao, speaking through his translator, said to Nixon: "I believe our old friend Chiang Kai-shek would not approve of this".

As an observer of the Mao-Nixon meeting, Winston Lord noted:

"The meeting lasted for about an hour. I remember distinctly, coming out of the meeting somewhat disappointed. I was impressed with the physical impact of Mao. It was also clear that this man was tough, ruthless, and came from a peasant background, in contrast to the elegant, Mandarin quality of Zhou Enlai. However, I thought that the conversation was somewhat episodic and not very full. Kissinger had sort of the same reaction as I did. Mao was speaking, as he usually did, in simple brush strokes, whereas we were used to the formal, elegant and somewhat lengthy presentations of Zhou Enlai. Mao would just throw in a few sentences; a few brush strokes. He went from topic to topic in rather a casual way.
...However, as we thought about it, and certainly by the end of the trip, we realized in fact that Mao had put in a very skillful performance. In his understated and unorthodox way he had set forth the main lines of Chinese policy, he had made clear the features that he considered very important, and that other things could fall into place. Mao was self-deprecating, even though he had a tremendous ego. He had some humor. He had gotten through his agenda purposefully, even though it seemed casual and episodic. He had managed to cover the main points. I still don’t think that it was one of the great conversations of all time. However, I think that Mao was much more purposeful and skillful than we gave him credit for at first."[3]

Nixon held many meetings with Chinese Premier Zhou Enlai during the trip, which included visits to the Great Wall, Hangzhou, and Shanghai. At the conclusion of his trip, the United States and the PRC governments issued the Shanghai Communiqué, a statement of their foreign policy views and a document that has remained the basis of Sino-American bilateral relations. Kissinger stated that the U.S. also intended to pull all its forces out of the island of Taiwan.[7] In the communiqué, both nations pledged to work toward the full normalization of diplomatic policy.

Richard Nixon and Zhou Enlai speaking at a banquet.

The Chinese agreed to a peaceful settlement of the Taiwan question. The statement enabled the U.S. and PRC to temporarily set aside the "crucial question obstructing the normalization of relations"[8] concerning the political status of Taiwan and to open trade and other contacts. However, the U.S. continued to maintain official relations with the government of the Republic of China in Taiwan, and did not break off until 1979, when the U.S. established full diplomatic relations with the PRC.

While in Shanghai, Nixon spoke about what this meant for the two countries in the future:

"This was the week that changed the world, as what we have said in that Communique is not nearly as important as what we will do in the years ahead to build a bridge across 16,000 miles and 22 years of hostilities which have divided us in the past. And what we have said today is that we shall build that bridge."[7]

Nixon and his aides carefully planned the trip to have the biggest possible impact on television audiences in the United States. The media coverage of the trip was overwhelmingly positive. Later interviews with correspondents who traveled with the President show how eager they were to be on the trip, which some labeled the most important summit meeting ever.[9]

Richard Nixon wrote many books about his international contributions and accomplishments. Beyond Peace is the last of his post-career volumes, addressing the need for the United States in a world transformed by the collapse of the Communist bloc.

The Nixon trip had three objectives: to embrace the People's Republic of China for a peaceful settlement on Taiwan, peaceful settlement of the Vietnam War, and to deter the Soviet Union's sphere of Communist influence after the Sino-Soviet split. Some consider that Nixon's diplomacy failed all three of them, as Taiwan is still facing a military threat from People's Republic of China after the Third Taiwan Strait Crisis in 1996, Vietnam was captured by the PRC-aided North Vietnam Communists two years after US withdrew troops, and the collapse of the Soviet Union in 1991 was mainly on the internal/domestic economic causes of its unproductive centrally planned economic system. However, no one can dispute that President Nixon's visit opened the door to Sino-American foreign relations, and paved the way to the strong economic ties that bind the two countries today.

Max Frankel of The New York Times received the Pulitzer Prize for International Reporting for his coverage of the event. Frankel was among those interviewed in the Assignment: China segment about the Nixon trip.