From Infogalactic: the planetary knowledge core
Jump to: navigation, search
For other uses, see Anastasia.

Saint Anastasia is a Christian saint and martyr who died at Sirmium in the Roman province of Pannonia Secunda (modern Serbia). In the Orthodox Church, she is venerated as St. Anastasia the Pharmakolytria, i.e. "Deliverer from Potions" (Ἁγία Ἀναστασία ἡ Φαρμακολύτρια).[1]

Concerning Anastasia little is reliably known, save that she died in the persecutions of Diocletian;[2] most stories about her date from several centuries after her death and make her variously a Roman or Sirmian native and a Roman citizen of patrician rank. One legend makes her the daughter of a certain Praetextus and the pupil of Saint Chrysogonus. Catholic tradition states that her mother was St. Fausta of Sirmium.

Anastasia has long been venerated as a healer and exorcist. Her relics lie in the Cathedral of St. Anastasia in Zadar, Croatia.

She is one of seven women, who along with the Blessed Virgin Mary, are commemorated by name in the Canon of the Mass.

This martyr enjoys the distinction, unique in the Roman liturgy, of having a special commemoration in the second Mass on Christmas Day. The day's Mass was originally celebrated not in honour of the birth of Christ but rather in commemoration of this martyr, and towards the end of the 5th century her name was also inserted in the Roman Canon. Nevertheless, she is not a Roman saint, for she suffered martyrdom at Sirmium, and was venerated at Rome until almost the end of the 5th century. It is true that a later legend, not earlier than the 6th century, makes Anastasia a Roman, though even in this legend she did not suffer martyrdom at Rome. The same legend connects her name with that of St. Chrysogonus, likewise not a Roman martyr, but put to death in Aquileia, though the San Crisogono church in Rome is dedicated to him.

According to this "Passio", Anastasia was the daughter of Praetextatus, a Roman vir illustris, and had Chrysogonus for a teacher. Early in the persecution of Diocletian the Emperor summoned Chrysogonus to Aquileia where he suffered martyrdom. Anastasia, having gone from Aquileia to Sirmium to visit the faithful of that place, was beheaded on the island of Palmaria, 25 December, and her body interred in the house of Apollonia, which had been converted into a basilica. The whole account is purely legendary, and rests on no historical foundations. All that is certain is that a martyr named Anastasia gave her life for the faith in Sirmium, and that her memory was kept sacred in that church. 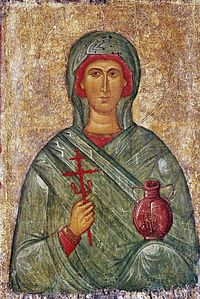 The so-called Martyrologium Hieronymianum[3] records her name on 25 December, not for Sirmium alone, but also for Constantinople, a circumstance based on a separate story. According to Theodorus Lector,[4] during the patriarchate of Gennadius (458-471) the body of the martyr was transferred to Constantinople and interred in a church which had hitherto been known as "Anastasis" (Gr. Anastasis, Resurrection); thenceforth the church took the name of Anastasia.

Similarly St. Anastasia was introduced into Rome from Sirmium by means of an already existing church. As this church was already quite famous, it brought the feast day of the saint into especial prominence. There existed in Rome from the 4th century, at the foot of the Palatine Hill and above the Circus Maximus, a church which had been adorned by Pope Damasus (366-384) with a large mosaic. It was known as "titulus Anastasiae", and is mentioned as such in the Acts of the Roman Council of 499. There is some uncertainty as to the origin of this name; either the church owes its foundation to and was named after a Roman matron Anastasia, as in the case of several other titular churches of Rome (Duchesne), or it was originally an "Anastasis" church (dedicated to the Resurrection of Christ), such as existed already at Ravenna and Constantinople; from the word "Anastasis" came eventually the name "titulus Anastasiae" (Grisar). Whatever way this happened, the church was an especially prominent one from the fourth to the 6th century, being the only titular church in the centre of ancient Rome, and surrounded by the monuments of the city's pagan past.

Within its jurisdiction was the Palatine where the imperial court was located. Since the veneration of the Sirmian martyr, Anastasia, received a new impetus in Constantinople during the second half of the 5th century, we may easily infer that the intimate contemporary relations between Old and New Rome brought about an increase in devotion to St. Anastasia at the foot of the Palatine.

At all events the insertion of her name into the Roman Canon of the Mass towards the end of the 5th century, show that she then occupied a unique position among the saints publicly venerated at Rome. Thenceforth the church on the Palatine is known as "titulus sanctae Anastasiae", and the martyr of Sirmium became the titular saint of the old 4th-century basilica. Evidently because of its position as titular church of the district including the imperial dwellings on the Palatine this church long maintained an eminent rank among the churches of Rome; only two churches preceded it in honour: St. John Lateran, the mother-church of Rome, and Santa Maria Maggiore. This ancient sanctuary stands today quite isolated amid the ruins of Rome. The commemoration of St. Anastasia in the second Mass on Christmas Day is the last remnant of the former prominence enjoyed by this saint and her church in the life of Christian Rome.

According to tradition, St. Donatus of Zadar brought Anastasia's relics to Zadar from Constantinople, when he was there with the Venetian duke Beato. They had been ordered by Charlemagne to negotiate the border between the Byzantine Empire and the Croatian territories that were under the dominion of Charlemagne's Frankish Empire.

The Orthodox Church venerates St. Anastasia as a Great Martyr, usually referring to her as "Anastasia the Deliverer from Potions", "Anastasia the Healer" or "Anastasia of Sirmium". She is often given the epithets, "Deliverer from Bonds" and "Deliverer from Potions", because her intercessions are credited with the protection of the faithful from poison and other harmful substances.[5] Her feast day is celebrated on December 22 on the Eastern Orthodox Church calendar. According to the Synaxarion, she was the daughter of Praepextatus (a pagan) and Fausta (a Christian)