Antequera (Spanish pronunciation: [aŋteˈkeɾa]) is a city and municipality in the province of Málaga, part of the Spanish autonomous community of Andalusia. It is known as "the heart of Andalusia" (el corazón de Andalucía) because of its central location among Málaga, Granada, Córdoba, and Seville. It is noted for two large Bronze Age dolmens.

In 2011, it had 41,854 inhabitants. It covers an area of 749.34 km2 with a population density of 55.85 inhabitants/km2, and is situated at an altitude of 575 meters. Antequera is the most populous city in the interior of the province and the largest in area. It is the twenty-second largest in Spain.[1] The city is located 45 km from Málaga and 115 km from Córdoba. The cities are connected by a high speed train and the A-45 motorway. Antequera is 160 km from Seville and 102 km from Granada, which is connected by motorway A-92 and in the near future, by the high-speed Transverse Axis Rail.[2]

Due to its strategic position in transport communications, with four airports located approximately one hour away and the railway running from the Port of Algeciras, Antequera is emerging as an important centre of transportation logistics, with several industrial parks, and the new Logistics Centre of Andalusia (Centro Logístico de Andalucía).[3] In addition, the Vega de Antequera, watered by the river Guadalhorce, is a fertile agricultural area that provides cereals, olive oil and vegetables in abundance.[4]

The nearby natural reserve of El Torcal, famous for its unstable limestone rocks, forms one of the most important karst landscapes in Europe.[5] It has an extensive archaeological and architectural heritage, highlighted by the dolmens of Menga, Viera, and El Romeral,[6] and numerous churches, convents, and palaces from different periods and in different styles. Antequera played a role in the rise of Andalusian nationalism: it was the site of the drafting of the Federal Constitution of Antequera in 1883, and also of the so-called Pact of Antequera Autonomy in 1978, which led to the achievement of autonomy for Andalusia.[7] It was considered as a possible headquarters of the Andalusian government but lost the vote in favor of Seville.[8]

Antequera lies 47 km north of the city of Málaga on the A45 highway, at the foot of the mountain ranges of El Torcal and Sierra de la Chimenea, 575 m above mean sea level. It occupies a commanding position overlooking the fertile valley bounded to the south by the Sierra de los Torcales, and to the north by the Guadalhorce River. At 817 km², the municipality is the largest, in terms of area, in the province of Málaga and one of the largest in Spain. The population is 41,197 (2002 census).

The saltwater Fuente de Piedra Lagoon, which is one of the few nesting places of the greater flamingo in Europe, and the limestone rock formation of the Torcal, a nature reserve and popular spot for climbers, are nearby. Across the Guadalhorce is Peña de los Enamorados, ("The Lovers' Rock"), named after the legend of two young Moorish lovers from rival clans who threw themselves from the rock while being pursued by the girl's father and his men. This romantic legend was adapted by the English poet Robert Southey for his Laila and Manuel, in which the lovers were a Muslim girl and her father's Christian slave.

On the northern outskirts of the city there are two Bronze Age burial mounds (barrows or dolmens), the Dólmen de Menga[9] and the Dólmen de Viera, dating from the 3rd millennium BCE. They are the largest such structures in Europe. The larger one, Dólmen de Menga, is twenty-five metres in diameter and four metres high, and was built with thirty-two megaliths, the largest weighing about 180 tonnes. After completion of the chamber (which probably served as a grave for the ruling families) and the path leading into the centre, the stone structure was covered with earth and built up into the hill that can be seen today. When the grave was opened and examined in the 19th century, archaeologists found the skeletons of several hundred people inside. The Dólmen del Romeral, which dates from about 1800 BCE, is outside the city. A large number of smaller stones were used in its construction. Los Silillos, a significant Bronze Age prehistoric village was uncovered several miles north of Antequera.[10]

From the 7th century BCE, the region was settled by the Iberians, whose cultural and economic contacts with the Phoenicians and Greeks are demonstrated by many archaeological discoveries. In the middle of the 1st millennium BCE, the Iberians mingled with wandering Celts (see Celtiberians) and with the civilization of Tartessos of southern Spain.[citation needed]

Actually, the Dolmen's complex, Menga, Viera and Romeral, are registered to be added as World's Heritage on 2016, being half of the process already approved. The manifest to get the recognition from Unesco also includes The Lovers' Rock and El Torcal.

The city was known to the Ancient Romans as Anticaria or Antiquaria.[11] It lay within the lands of Tartessos and their successors the Turdetani, the most civilized of the Prehistoric Iberians. Carthaginian Iberia developed along the coast from the 6th century BCE, with their port of Malaca (Malaga) on Anticaria's coast. The Carthaginians expanded into the interior under Hamilcar Barca during the 230s BCE following Carthage's loss of Sicily during the First Punic War. The Roman Republic slowly conquered eastern Hispania over the course of the Second Punic War, cementing its control with Scipio Africanus's 206 BCE victory at Ilipa. The territory was ceded by Carthage in 201 BCE and Anticaria's region was organized as Hispania Ulterior in 197 BCE. That year, the Turdetani rose in revolt, being put down a few years later by legions under Cato the Elder. The area was then heavily Romanized with many colonies established nearby. The present street plan largely follows those of the Roman town.[citation needed] Following Agrippa's success in suppressing the Cantabri in northern Spain, Hispania was again reorganized: Anticaria then formed part of Hispania Baetica. Under the Romans, Anticaria was particularly known for the high quality of its olive oil.[citation needed] Spain became increasingly Christian after the 2nd century.

During the fall of the Roman Empire, the area of Anticaria fell to the pagan Siling Vandals in the 410s. After they were attacked by the Visigoths, they voluntarily submitted to Gunderic of the Hasding Vandals and western Alans in 419. His half-brother Genseric succeeded him, eventually relocating his people to Africa. Spain was then dominated by the Visigothic Kingdom, which converted to Arian Christianity.

Antequera's castle with the Peña de los Enamorados in the background 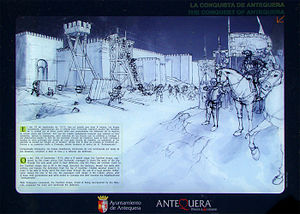 The Conquest of Antequera

The Arab invasion of the Iberian peninsula began in 711 under Tariq ibn-Ziyad. Anticaria was conquered around 716, becoming part of the Umayyad Caliphate under the name Medina Antaquira[citation needed] (Arabic for "Antaquira City"). Umayyad Spain was formally Muslim but broadly (though not entirely) tolerant of other religions. Amid the Reconquista, a coalition of Christian kings drove the Muslims from Central Spain in the Battle of Las Navas de Tolosa. Over the next few years, the Almohads were defeated and al-Andalus greatly reduced in strength. Medina Antaquira, which at that time had a population of about 2600, became one of the northern cities of the remaining Nasrid kingdom of Granada and an important border town. To defend against the Catholic Spanish troops from the northern kingdoms, fortifications were built and a Moorish castle erected overlooking the city. For about two hundred years, Medina Antaquira was repeatedly attacked and, on 16 September 1410, an army led by Prince Ferdinand of Aragon conquered the city.[12] Ferdinand thereafter added the style "lord of Antequera" (Don Fernando de Antequera) to his titles. The city's main street still carries his name: Calle Infante Don Fernando. 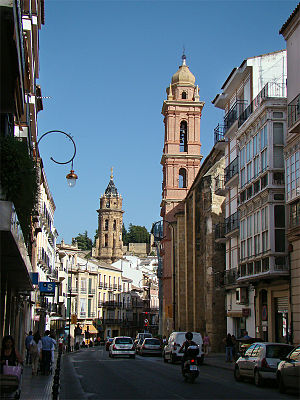 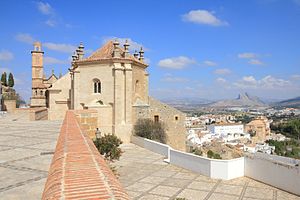 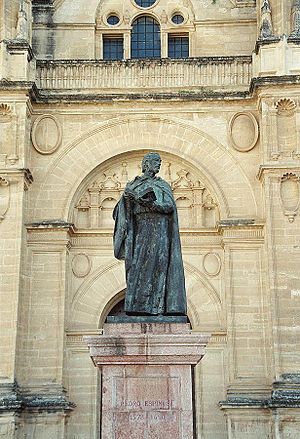 After Antequera became part of the Kingdom of Castile, the Muslims were driven out. The city became a Catholic fortress against the Muslim Nasrid kingdom of Granada, and a base for continuing conquest. After Granada, the last Moorish city, capitulated in 1492, Antequera began to recover from the centuries of fighting, and the population increased from 2,000 to almost 15,000 in twenty years.

Antequera became an important commercial town at the crossroads between Málaga to the south, Granada to the east, Córdoba to the north and Seville to the west. Because of its location, its flourishing agriculture, and the work of its craftsmen, all contributing to the cultural growth of the city, Antequera was called the "Heart of Andalusia" by the early 16th century. During this time the townscape also changed. Mosques and houses were torn down, and new churches and houses built in their place. The oldest church in Antequera, the late Gothic Iglesia San Francisco, was built around the year 1500.

In 1504, the humanist university of the Real Colegiata de Santa María la Mayor was founded; it became a meeting place for important writers and scholars of the Spanish Renaissance. A school of poets arose during the 16th century that included Pedro Espinosa, Luis Martín de la Plaza and Cristobalina Fernández de Alarcón. A school of sculpture produced artists who were mainly employed on the many churches built, and who were in demand in Seville, Málaga and Córdoba and the surrounding areas. The newly built churches included San Sebastián in the city centre and the largest and most splendid of the city, Real Colegiata de Santa María, with its richly decorated mannerist façade.

Still more churches and convents were built into the 18th century (today there are 32 in the city altogether), as were palaces for the members of the aristocracy and the wealthier citizens in the Spanish Baroque style.

Antequera's prosperity slowly came to a close at the end of the 17th century and the beginning of the 18th. Spain had to accept the loss of its American colonies and lost a number of crucial military conflicts in Europe. That led to a deep economic crisis, which in some parts of the country led people to turn to bartering. Church, aristocracy and the upper middle class — the great landowners — who had been the clients and sponsors of the creative arts, lost most of their fortunes and could not afford to build more churches or palaces.

Starting from the mid-18th century, Spain underwent a series of reforms, in particular a land reform and the reduction of the power of the Church (the expulsion of the Jesuits in 1767) that produced a slow economic recovery. In Antequera, textile production became the main industry.[citation needed][dubious – discuss] In 1804, yellow fever caused a setback, as well as the Napoleonic wars which broke out shortly after.

In the 1960s, the nearby Costa del Sol developed into an international tourist hotspot and Antequera experienced another economic upswing. Today the city is an important tourist and cultural center, nationally as well as regionally.

The city's museums house about 80% of all the art treasures in the province of Málaga, which makes it one of the cultural centres of Andalusia.

In the eastern suburbs there is one of the largest burial mounds in Spain, dating from the Bronze Age, and with subterranean chambers excavated to a depth of c. 20 m., The Dólmen de Menga.

Historically, the region's economy was based on the production and processing of agricultural products (olives, grain, and wool), as well as furniture manufacturing. In the mid-19th century, it manufactured flannels, paper, leather, silk, and soap and carried on a large trade in grain, fruit, olive oil, and locally-quarried marble.[12] A large sugar industry was established in 1890.[14] By the First World War, it lay on the Bobadilla–Granada railway and woolen textiles were being manufactured.[14] The primary employer of the region, however, continued to be the production and trade of grain, fruit, olive oil, and wine.[14] The textile industry collapsed in the early 20th century.[why?][citation needed]

Today, tourism is the main industry and there are an increasing number of international visitors.