Almería (/ˌælməˈriːə/; Spanish: [almeˈɾi.a], locally: [aɾmeˈɾi.a, al-]) is a city in Andalusia, Spain, situated in the southeast of Spain on the Mediterranean Sea. It is the capital of the province of the same name.

Almería was founded due to the need for a better defense system for the regional Arab towns. It was Abd-al-Rahman III who founded the Alcazaba (the Citadel), which gave this city its name: Al-Mari'yah (المريّة, the Watchtower).[1]

In the first century, Christian documents report that there was a town named Urci, possibly near the current site of Almería, in the Hispania of the Roman Empire. However, this is disputed, as there are several possible sites of the town. However, one Saint Indaletius, a missionary is said to have evangelized Urci and become its first bishop, is officially the patron saint of Almería.[2]

Later, the city was refounded by Calipha Abd-ar-Rahman III of Córdoba in 955 AD. It was to be a principal harbour in his extensive domain to strengthen his Mediterranean defences. 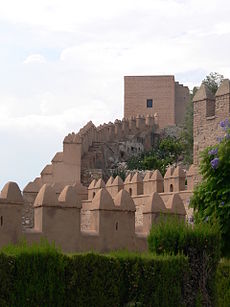 Its Moorish castle, the Alcazaba of Almería, is the second largest among the Muslim fortresses of Andalusia, after the Alhambra. 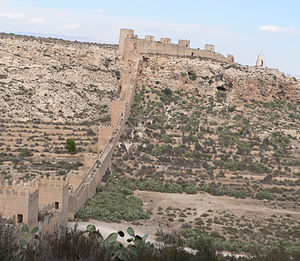 The ancient walls of Jayrán

In this period, the port city of Almería reached its historical peak. After the fragmentation of the Caliphate of Córdoba in 1031, Almería continued to be ruled by powerful local Muslim Taifa emirs like Jairan, the first independent Emir of Almería and Cartagena, and Almotacin, the poet emir. Both Jairan and Almotacin were fearless warriors, but also sophisticated patrons of the arts. A silk industry, based upon plantings of mulberry trees in the hot, dry landscape of the province, supported Almería in the 11th century and made its strategic harbour an even more valuable asset. 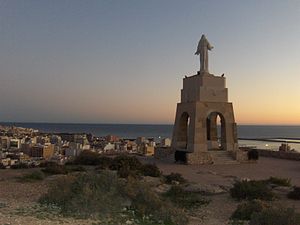 The statue of San Cristóbal

Contested by the emirs of Granada and Valencia, Almería experienced many sieges, including one especially fierce siege when Christians, called to the Second Crusade by Pope Eugene III, were also encouraged to attack the Muslim 'infidels' on a more familiar coast. On that occasion Alfonso VII, starting on 11 July 1147, at the head of mixed forces of Catalans, Genoese, Pisans and Franks, led a crusade against the rich city, and Almería was occupied on 17 October 1147.[3]

Within a decade, however, Almería had passed to the control of the puritanical Muslim Almoravid emirs,[3] and not until the late 15th century did it fall permanently into Christian hands. The city surrendered to the Catholic Monarchs, Fernando and Isabel, on December 26, 1489. 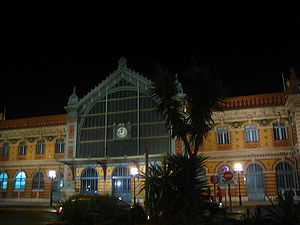 The 16th century was for Almería a century of natural and human catastrophes; for there were at least four earthquakes, of which the one in 1522 was especially violent, devastating the city. The people who had remained Muslim were expelled from Almería after the War of Las Alpujarras in 1568 and scattered across Spain. Landings and attacks by Berber pirates were also frequent in the 16th century, and continued until the early 18th century. At that time, huge iron mines were discovered and French and British companies set up business in the area, bringing renewed prosperity and returning Almería to a position of relative importance within Spain.[citation needed]

During the Spanish Civil War the city was shelled by the German Navy, with news reaching the London and Parisian press about the "criminal bombardment of Almería by German planes".[4] Almería surrendered in 1939, being the last Andalusian capital city to fall to Francoist forces.

In the second half of the 20th century, Almería witnessed spectacular economic growth due to tourism and intensive agriculture, with crops grown year-round in massive invernaderos – plastic-covered "greenhouses" – for intensive vegetable production.

After Franco's death and popular approval of the new Spanish Constitution, the people of southern Spain were called on to approve an autonomous status for the region in a referendum. While the referendum were approved with 118,186 votes for and 11,092 votes against in Almería province,[5] an absolute majority of all 279,300 registered electors was needed, and the result in Almería was just 42%. The Government impugned the result,[citation needed] and Almería remained part of the present autonomous region of Andalusia.[6] 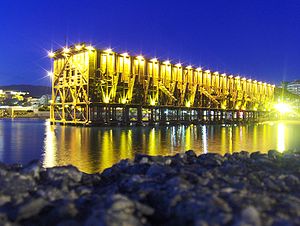 Almeria has the highest proportion of Muslim population of any Spanish city at 11-20%, depending on source.[7][not in citation given] 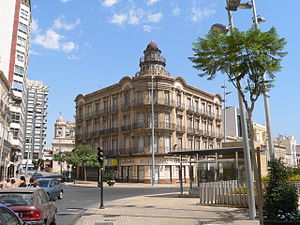 House of the Butterflies

Famous natives of Almería include Nicolás Salmerón y Alonso, who in 1873 was the third president of the First Spanish Republic, as well as several musicians, including the composer José Padilla Sánchez, whose music was declared of "universal interest" by Unesco in 1989, the popular folk singer Manolo Escobar, renowned Flamenco guitar player José Tomás "Tomatito" and Grammy Award winner David Bisbal; the champion motorcyclist Antonio Maeso moved to Almería as a child.

The Irish folk-rock group The Pogues paid tribute to Almeria in "Fiesta," a rollicking Spike Jones-flavored song on the band's third album, If I Should Fall From Grace with God.

Although administratively annexed to the Autonomous Community of Andalucia, in Southern Spain, some people of the province[who?] have shown a clear desire for regional autonomy in different referendums. The insular effect produced by its geographical situation has made several customs, accents and history different from the rest of the Autonomous Region of Andalucia.[citation needed]

Almería hosted the Mediterranean Games in 2005. The city has 2 football teams: UD Almería, which plays in Spanish First División following promotion in 2013 and CP Almería, in regional division. 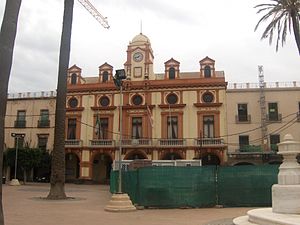 The economy of Almería is mostly based on agriculture, which is located mainly in the western part of the region. Numerous greenhouses mostly constructed with plasticulture produce tonnes of fruit and vegetables, more than 70% of their product being exported to the rest of Europe. 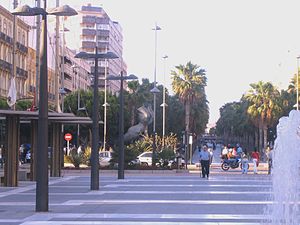 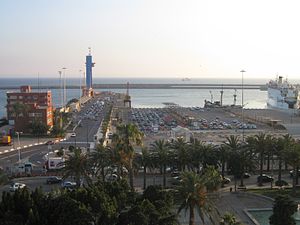 By land, Almería can be reached by the A-7 Mediterranean Highway, which connects the Mediterranean area with the Spanish A-92 that unites it with the rest of Andalusia.

By sea, the port of Almería has connections to Melilla, Algeria and Morocco, and also tourist cruises in the Mediterranean. It also has a marina with moorings for pleasure boats. Currently the port of Almería is being expanded with new docks and transformed into a container port to take large-scale international shipping and thereby increase its freight traffic. It normally connects with the following destinations:

By air, Almería is served by Almería Airport, the fourth largest in Andalusia[citation needed] with domestic and international connections to Amsterdam, Madrid, Barcelona, Melilla, London, Manchester, Birmingham, Brussels, Dublin and Swiss, German and other EU airports.

Due to its arid landscape, numerous spaghetti westerns were filmed in Almería. According to Christopher Frayling, the author of Once Upon a Time in Italy: The Films of Sergio Leone, some of the sets are still there.[8] These sets are located in the desert of Tabernas. The town and region were also used by David Lean in Lawrence of Arabia (1962), John Milius in The Wind and the Lion (1975) and others.

One of Almería's most famous natural spots is the Cabo de Gata-Níjar Natural Park. This park is of volcanic origin, and is the largest and most ecologically significant marine-terrestrial space in the European Western Mediterranean Sea. With one of the most beautiful and ecologically rich coasts of the western Mediterranean and an area of 380 square kilometres it is one of Spain’s natural jewels. The Cabo de Gata Natural Park runs through the municipal areas of Níjar, Almería and Carboneras. Its villages, previously dedicated to fishing, have become tourism spots for those interested in nature. One of the greatest attractions of the Cabo de Gata Natural Park is its beaches.

Panorama of the city taken from La Alcazaba

Almería is the driest city in Europe and is located in the only region on in the European continent with a hot subtropical desert climate (BWh, according to the Köppen climate classification). With an average annual temperature of above 19 °C it also qualifies as one of the warmest cites in continental Europe. The dry season (although there is no real wet season) occurs during the hottest months, as in the Mediterranean climate.

This climatic region spreads along the coastline around Almeria, from approximately Almerimar to the west, to Carboneras to the east. Inland the climate is temperate (mean annual temperature less than 18 °C) arid or semi-arid (for instance in the Tabernas desert where the temperature is 17.9 °C).

Almeria also experiences the warmest winters of any city on the European continent with a population over 100,000, and hot and dry summers with no precipitation between June and September. Almería enjoys about 3000 hours of sunshine annually with over 320 sunny days a year on average (6 hours of sunshine in January and 12 in July). The city has an average of only 26 days with precipitation annually.

Almería is unique, for a city in Continental Europe, for not having any registered temperature under the freezing mark in its recorded weather history. The coldest temperature recorded was 0.2 °C (32.4 °F) on 9 February 1935.[9]

During the winter, daily maximum temperatures tend to stay around 18 °C (64 °F). At night, the temperature very rarely drops below 8 °C (46 °F). Precipitation even during the wettest months is rare, this falls in short showers or thunderstorms. Inland areas of the Almería province have reached 50 °C (122 °F).[10]

During the warmest months - July and August, the sky is clear and sunny and no rainfall occurs. The typical daily temperatures are around 33 °C (91 °F) during the heat of the day. This is often influenced by the Levant wind, a hot dry easterly wind that blows from the interior desert that makes temperatures soar to 38 °C (100 °F) or higher. These can also carry dust or sand. The minimum temperatures stay around 24 °C (75 °F) during July and August. Heatwaves in Almería are quite common; Almería reached up to 43 °C (109 °F) in August 2011.[11]

In 2000, a team of geologists found a cave filled with giant gypsum crystals in an abandoned silver mine near Almería. The cavity, which measures 1.8x1.7 metres, would be the largest geode ever found. The entrance of the cave has been blocked by five tons of rocks, and is under police protection (to prevent looters from entering). According to geological models, the cave was formed during the Messinian salinity crisis 6 million years ago, when the Mediterranean sea evaporated and left thick layers of salt sediments (evaporites). The cave is currently not accessible to tourists.