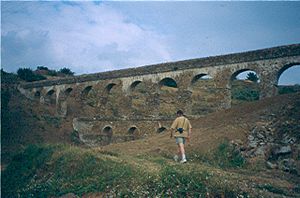 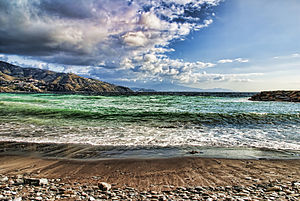 Almuñécar is a municipality in the Spanish Autonomous Region of Andalusia on the Costa Tropical between Nerja (Málaga) and Motril. It has a subtropical climate. Almuñécar lies in the province of Granada, and has around 27,700 citizens (2012).[1] Since 1975, the town has become one of the most important tourist towns in Granada province and on the Costa Tropical; it has good transport connections and a football (soccer) stadium.

Almuñécar is an important setting in Laurie Lee's account of the outbreak of the Spanish Civil War in As I Walked Out One Midsummer Morning, and referred to as "Castillo" to disguise people's identities.

Almuñécar's coat of arms, which shows the turbaned heads of three Barbary pirates floating in the sea, was granted to the town by King Carlos I in 1526 for its having destroyed a Berber raiding force.

Trinidad Herrera is the first woman to be elected mayor of Almuñecar. Although Juan Carlos Benavides' Covergencia Andaluza party won the most popular votes, he failed to form a coalition. The city council elected Herrera, local leader of the Partido Popular, on 11 June 2011.

Almuñécar began as a Phoenician colony named Sexi, and even today, some of its inhabitants still call themselves Sexitanos. Under the Moors, Almuñécar blossomed as the fishing town of al-Munakkab (المُنَكَّب) or Ḥiṣn-al-Munakkab (حصن المنكب). Although the Phoenician and Roman history of the district was known from Greek and Roman sources it was not until the 1950s that significant archaeological evidence was discovered.

The Phoenicians first established a colony in Almuñécar in about 800 BC and this developed for six hundred years into an important port and town with the name of Ex or Sexi and with a large fish salting and curing industry that was a major supplier of Greece and Rome. They also supplied a prized fish paste called garum made from the intestines of small fishes by a process of fermentation.[2][3] Archaeological evidence comes chiefly from Phoenician cemeteries, the earlier Laurita necropolis on the hillside at Cerro San Cristobal and the later necropolis at Punte de Noy. An extensive collection of Phoenician grave goods and other artifacts is on display in the town museum located at the Castle of San Miguel and in the 'Cueva de Siete Palacios'.

The Romans came to southern Spain at the time of the Second Punic War between Rome and Carthage in 218 BC as part of their campaign to subdue the Phoenician settlements along the coast. During 700 years of Roman colonial rule the town and its industry prospered, and in 49 BC the municipality (one of 20 cities in Spain honoured at that time) was given the title Firmium Julium Sexi in recognition of the town's loyalty to Rome.

Major evidence of the fish salting and curing industry was uncovered during excavations in the 1970s and 1980s in the extensive Majuelo Botanical Gardens. These revealed the great extent of the rebuilding and modernising of the industry under Roman influence. A segment of the site has been carefully conserved, giving some idea of the size of the industry. This industry required not only large quantities of fish and sea salt, produced in many places along the coast, but also a constant supply of fresh running water.

To meet this demand the Romans built in the 1st century AD four miles of water conduit in the valleys of the Rio Seco and the Rio Verde, including five significant aqueducts. All, remarkably, are still standing and four of them are still in use after 2,000 years – adapted by the Moors over the centuries to serve the needs of crop irrigation. The Roman water supply also served the town and recent excavations in the town centre have uncovered the fifth aqueduct and the Roman baths.

The Romans were probably the first to fortify the Castle of Saint Miguel, although frequent rebuilding has obliterated most of the very extensive Roman fortifications. These included a bridge from the castle to the 'Peñon del Santo' with a massive 100 foot (30 m) high arch that survived until at least 1800.

Just below the castle on the landward side is the 'Cueva de Siete Palacios', which translates as 'Cave of the Seven Palaces'. However, it is not actually a cave, rather it is the largest remnant of a Roman palace yet found in Almuñécar, having survived for hundreds of years as 'social housing' until the 'cave dwellers' were re-housed in the 1970s. Only then did its true origins become apparent. It now houses the town museum.

Other important Roman remains in the district include a Roman bridge at Cotobro and Roman tombs in several locations.

With the decline of the Western Roman Empire in the 5th century, Germanic peoples, including the Visigoths, crossed the Pyrenees mountain range into the Iberian peninsula. By 456 the Visigoths emerged as the dominant power, and expanded their territory onto the southwestern Mediterranean coast. However, Hispania remained relatively Romanized under their rule. The Visigoths adopted Roman culture and language, and maintained many of the old Roman institutions,[4] although much of the economic structure collapsed, and at Almuñécar the fish curing industry declined rapidly. The Catholic bishops were the rivals of Visigothic power and culture until the end of the 6th and beginning of the 7th century—the period of transition from Arianism to Catholicism in the Visigothic kingdom.

The first Arab invasion of southern Spain came in 711 AD at or near Gibraltar. At Almuñécar, the town remembers 15 August 755 when Omeya Abd ar-Rahman I of Damascus, the founder of the Emirate of Cordoba, arrived from North Africa to establish his Arab kingdom. The Moors introduced the growing of sugar cane and sustained the fishing industry; many of the streets and buildings of the old town were developed by the Moors. The castle remained the stronghold of the city and the seat of government and its walls were strengthened. Extensive dungeons were built for those out of favour with local rulers, but also baths for the use of the social elite.

The cross on Peñon del Santo, the rock at the old harbour entrance, marks the defeat of the Arabs, their surrender at Almuñécar, and the return of Christian rule in 1489.

Following the restoration of Christian rule, new architectural statements were made – for example the construction of a new church was started in 1557 and completed to the latest design in 1600, the first Baroque-style church in the province of Granada. The old town was also Christianised (or perhaps paganised – by the Goddess of fertility herself), as in the building of the water fountain on the Calle Real (Royal Street), dated to 1559 and with the royal cypher above, but at that time using the existing Roman water supply from Las Angosturas first installed 1500 years earlier.

The castle was again extensively rebuilt and placed under the patronage of San Miguel. It was rebuilt and heavily fortified by the Christian King Charles III and last defended (by the French) in the Napoleonic Wars. Just one tower was partly destroyed but also most of the internal buildings. This was the work of the crew of the British vessel, HMS Hyacinth, acting in collaboration with Spanish partisans from Nerja on 27 May 1812. They caused the French garrison to flee and then attempted to render the castle unusable but with little success – owing to the gunpowder being damp. However, the Castle was finished as a military stronghold and following a cholera outbreak in 1830 the castle became the town cemetery, from which use it was cleared in 1986, to permit the restoration which is still in progress.

In 1562, a Spanish fleet sank in a storm in La Herredura Bay. 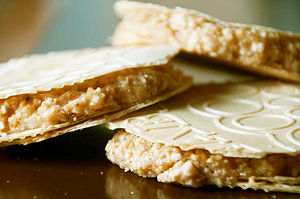 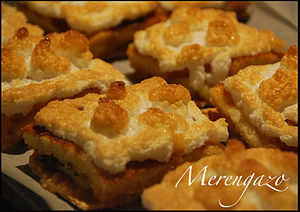 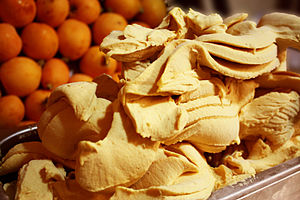 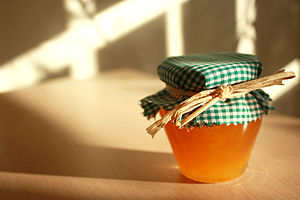 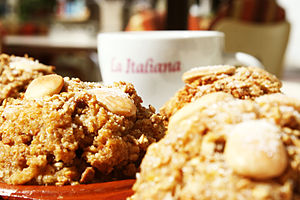 Almuñécar's gastronomy focuses mainly on fresh fish and tropical fruit. Monkfish (rape), red sea bream (besugo), squids (calamares), grouper (mero), croaker (corvina), and shellfish paella are typical examples of local seafood. There are several restaurants next to the beach where meals featuring these can be eaten al fresco (at tables outside) in the sea breezes. Pub crawls with stops at several bars to try different tapas are also popular.

The soil in the area is very fertile, and due to the semi-tropical climate, tropical fruits can be grown here. The most notable are mangos, avocados, loquats, and cherimoyas, but it is also easy to find papayas, guavas, lychees, kiwis, figs and even prickly pears, the fruit of the Opuntia ficus-indica cactus, which are used to make ice cream and jams sold in several local coffee shops. Until the 1960s, Almuñécar had an important role as a sugar cane producer, but an international boycott and government intervention ruined the twelve-century-old industry.

Some typical dessert cakes still made locally include:

Almuñécar is twinned with: