The automotive industry is a wide range of companies and organizations involved in the design, development, manufacturing, marketing, and selling of motor vehicles.[1] It is one of the world's most important economic sectors by revenue. The automotive industry does not include industries dedicated to the maintenance of automobiles following delivery to the end-user, such as automobile repair shops and motor fuel filling stations.

The term automotive was created from Greek autos (self), and Latin motivus (of motion) to represent any form of self-powered vehicle. This term was proposed by SAE member Elmer Sperry.[2]

Main article: History of the automobile 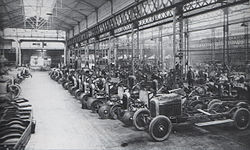 The automotive industry began in the 1890s with hundreds of manufacturers that pioneered the horseless carriage. For many decades, the United States led the world in total automobile production. In 1929 before the Great Depression, the world had 32,028,500 automobiles in use, and the U.S. automobile industry produced over 90% of them. At that time the U.S. had one car per 4.87 persons.[3] After World War II, the U.S. produced about 75 percent of world's auto production. In 1980, the U.S. was overtaken by Japan and became world's leader again in 1994. In 2006, Japan narrowly passed the U.S. in production and held this rank until 2009, when China took the top spot with 13.8 million units. With 19.3 million units manufactured in 2012, China almost doubled the U.S. production, with 10.3 million units, while Japan was in third place with 9.9 million units.[4] From 1970 (140 models) over 1998 (260 models) to 2012 (684 models), the number of automobile models in the U.S. has grown exponentially.[5]

Safety is a state that implies to be protected from any risk, danger, damage or cause of injury. In the automotive industry, safety means that users, operators or manufacturers do not face any risk or danger coming from the motor vehicle or its spare parts. Safety for the automobiles themselves, implies that there is no risk of damage.

Safety in the automotive industry is particularly important and therefore highly regulated. Automobiles and other motor vehicles have to comply with a certain number of norms and regulations, whether local or international, in order to be accepted on the market. The standard ISO 26262, is considered as one of the best practice framework for achieving automotive functional safety.[6]

In case of safety issues, danger, product defect or faulty procedure during the manufacturing of the motor vehicle, the maker can request to return either a batch or the entire production run. This procedure is called product recall. Product recalls happen in every industry and can be production-related or stem from the raw material.

Around the world, there were about 806 million cars and light trucks on the road in 2007, consuming over 980 billion litres (980,000,000 m3) of gasoline and diesel fuel yearly.[7] The automobile is a primary mode of transportation for many developed economies. The Detroit branch of Boston Consulting Group predicts that, by 2014, one-third of world demand will be in the four BRIC markets (Brazil, Russia, India and China). Meanwhile, in the developed countries, the automotive industry has slowed down.[8] It is also expected that this trend will continue, especially as the younger generations of people (in highly urbanized countries) no longer want to own a car anymore, and prefer other modes of transport.[9] Other potentially powerful automotive markets are Iran and Indonesia.[10] Emerging auto markets already buy more cars than established markets. According to a J.D. Power study, emerging markets accounted for 51 percent of the global light-vehicle sales in 2010. The study, performed in 2010 expected this trend to accelerate.[11][12] However, more recent reports (2012) confirmed the opposite; namely that the automotive industry was slowing down even in BRIC countries.[8] In the United States, vehicle sales peaked in 2000, at 17.8 million units.[13] 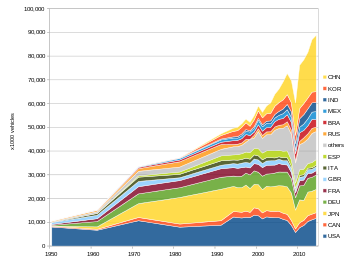 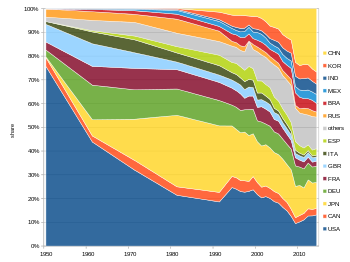 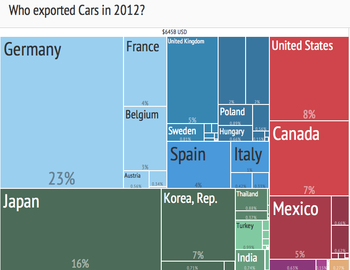 Rank of manufacturers by production in 2013[34]

OICA[35] defines these entries as follows:

The table below shows the world's largest motor vehicle manufacturing groups, along with the marques produced by each one. The table is ranked by 2013 production figures from the International Organization of Motor Vehicle Manufacturers (OICA)[34] for the parent group, and then alphabetically by marque. Joint ventures are not reflected in this table. Production figures of joint ventures are typically included in OICA rankings, which can become a source of controversy.[36][37]

Car makes and their parent companies

The table below lists most car makes and their parent companies.