Bloomsburg is one of two principal communities of the Bloomsburg-Berwick, PA Micropolitan Statistical Area, a micropolitan area that covers Columbia and Montour counties,[5] and had a combined population of 85,562 at the 2010 census.[6]

A marker behind the airport showing the height of the river during historic floods (the dirt mark is from the 2006 floods). 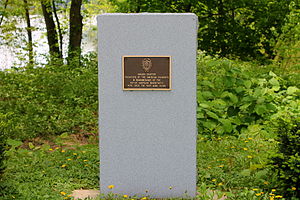 The first signs of European settlement date to the year 1772, when James McClure established a log cabin in the area. Until the mid-19th century, it was just a small village, known as Bloom Township. Traditionally, Bloomsburg's founding in 1802 has been ascribed to settler Ludwig Eyer, son of Johann Martin Eyer.[7][8] For 75 years after the discovery of ore in the area,[when?] Bloomsburg developed a booming iron industry.

The Bloomsburg Historic District and Rupert Covered Bridge No. 56 are listed on the National Register of Historic Places.[14]

Bloomsburg is located west of the center of Columbia County, along the north bank of the Susquehanna River and on the east side of Fishing Creek. The southern half of the town occupies level ground along the Susquehanna, while the northern half is occupied by 940-foot-high (290 m) Turkey Hill. The campus of Bloomsburg University of Pennsylvania occupies a large portion of the hill.[17] 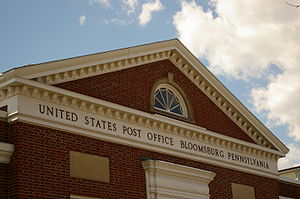 Bloomsburg is served by the Bloomsburg Area School District, which has about 1,800 students enrolled from the town itself, western, and southeastern suburbs.

The Central Columbia School District has approximately 2,100 students and encompasses the eastern and northern suburbs of Bloomsburg.

Bloomsburg University, one of the 14 institutions in the Pennsylvania State System of Higher Education, had a 2012 enrollment of 10,000 full-time undergraduate and 846 graduate students.

Additionally, there are several private religious and non-denominational schools in and of the immediate vicinity of Bloomsburg.

The one park in Bloomsburg is the 43-acre (170,000 m2) Town Park,[27] established in 1927. The Norris E. Rock Memorial Swimming Pool and the Bloomsburg Skate Park immediately adjoin the park. The town has also purchased the former Streater Farm at the confluence of Fishing Creek and the Susquehanna River, which is being converted into athletic fields, a nature preserve, and a walking path that will be tied in with the existing Columbia-Montour Rails-to-Trails program.

On May 31, 2009, Bloomsburg Mills, Inc., after 120 years of weaving and finishing fabrics in Bloomsburg, went out of business, closing both a local plant and a dye plant in Monroe, North Carolina. The closure affected over 200 employees in both locations.[28] 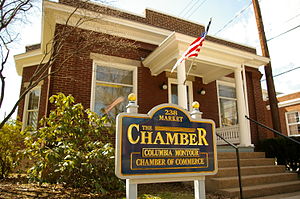 In early 2014 Windsor Foods (formerly Del Monte Foods) closed their doors and affecting more than 160 employees. Company officials cited flooding as a result of Tropical Storm Lee as one of their reasons for the plant closing.[29]

Bloomsburg is home to the Bloomsburg Theatre Ensemble, founded in 1978 to establish a resident professional ensemble for the production of quality entertainment and educational programs for the region, and to promote the arts.

The Bloomsburg Public Library was founded in 1899 and funded jointly by the taxpayers of Bloomsburg, Scott Township, and Hemlock Township.

Bloomsburg is also home to the Bloomsburg Fair (the largest fair in the state of Pennsylvania) which, since 1855, is a traditional farm fair.

The David Stroup Fountain, erected in 1892, is located at Bloomsburg's Market Square. David Stroup was the owner of a local candy shop who left money in his will to the town's water works. The current fountain is a restored version of the original, which was dismantled in 1966 due to its deterioration but was put back together in 1982 by two local residents. The original crane sculpture, which was at the top of the fountain, was lost in storage until 2005, when it was cleaned, repaired, and replaced on the fountain.

The Children's Museum is at 2 West Seventh Street. 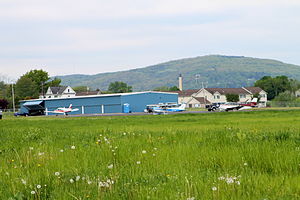 Bloomsburg Municipal Airport is in the southeast corner of Bloomsburg, along the Susquehanna River.