From Infogalactic: the planetary knowledge core
Jump to: navigation, search
Not to be confused with Cyber subculture.

Cyberculture or computer culture is the culture that has emerged, or is emerging, from the use of computer networks for communication, entertainment, and business. Internet culture is also the study of various social phenomena associated with the Internet and other new forms of the network communication, such as online communities, online multi-player gaming, wearable computing, social gaming, social media, mobile apps, augmented reality, and texting,[1] and includes issues related to identity, privacy, and network formation.

Since the boundaries of cyberculture are difficult to define, the term is used flexibly, and its application to specific circumstances can be controversial. It generally refers at least to the cultures of virtual communities, but extends to a wide range of cultural issues relating to "cyber-topics", e.g. cybernetics, and the perceived or predicted cyborgization of the human body and human society itself. It can also embrace associated intellectual and cultural movements, such as cyborg theory and cyberpunk. The term often incorporates an implicit anticipation of the future.

The Oxford English Dictionary lists the earliest usage of the term "cyberculture" in 1963, when A.M. Hilton wrote the following, "In the era of cyberculture, all the plows pull themselves and the fried chickens fly right onto our plates."[3] This example, and all others, up through 1995 are used to support the definition of cyberculture as "the social conditions brought about by automation and computerization."[3] The American Heritage Dictionary broadens the sense in which "cyberculture" is used by defining it as, "The culture arising from the use of computer networks, as for communication, entertainment, work, and business".[4] However, what both the OED and the American Heritage Dictionary miss is that cyberculture is the culture within and among users of computer networks. This cyberculture may be purely an online culture or it may span both virtual and physical worlds. This is to say, that cyberculture is a culture endemic to online communities; it is not just the culture that results from computer use, but culture that is directly mediated by the computer. Another way to envision cyberculture is as the electronically enabled linkage of like-minded, but potentially geographically disparate (or physically disabled and hence less mobile) persons.[original research?]

Cyberculture is a wide social and cultural movement closely linked to advanced information science and information technology, their emergence, development and rise to social and cultural prominence between the 1960s and the 1990s. Cyberculture was influenced at its genesis by those early users of the internet, frequently including the architects of the original project. These individuals were often guided in their actions by the hacker ethic. While early cyberculture was based on a small cultural sample, and its ideals, the modern cyberculture is a much more diverse group of users and the ideals that they espouse.

Numerous specific concepts of cyberculture have been formulated by such authors as Lev Manovich,[5][6] Arturo Escobar and Fred Forest.[7] However, most of these concepts concentrate only on certain aspects, and they do not cover these in great detail. Some authors aim to achieve a more comprehensive understanding distinguished between early and contemporary cyberculture (Jakub Macek),[7] or between cyberculture as the cultural context of information technology and cyberculture (more specifically cyberculture studies) as "a particular approach to the study of the 'culture + technology' complex" (David Lister et al.).[8]

Manifestations of Cyberculture include various human interactions mediated by computer networks. They can be activities, pursuits, games, places and metaphors, and include a diverse base of applications. Some are supported by specialized software and others work on commonly accepted web protocols. Examples include but are not limited to:

First and foremost, cyberculture derives from traditional notions of culture, as the roots of the word imply. In non-cyberculture, it would be odd to speak of a single, monolithic culture. In cyberculture, by extension, searching for a single thing that is cyberculture would likely be problematic. The notion that there is a single, definable cyberculture is likely the complete dominance of early cyber territory by affluent North Americans. Writing by early proponents of cyberspace tends to reflect this assumption (see Howard Rheingold).[9]

The ethnography of cyberspace is an important aspect of cyberculture that does not reflect a single unified culture. It "is not a monolithic or placeless 'cyberspace'; rather, it is numerous new technologies and capabilities, used by diverse people, in diverse real-world locations." It is malleable, perishable, and can be shaped by the vagaries of external forces on its users. For example, the laws of physical world governments, social norms, the architecture of cyberspace, and market forces shape the way cybercultures form and evolve. As with physical world cultures, cybercultures lend themselves to identification and study.

Thus, cyberculture can be generally defined as the set of technologies (material and intellectual), practices, attitudes, modes of thought, and values that developed with cyberspace.[13]

Cyberculture, like culture in general, relies on establishing identity and credibility. However, in the absence of direct physical interaction, it could be argued that the process for such establishment is more difficult.

In some senses, online credibility is established in much the same way that it is established in the offline world; however, since these are two separate worlds, it is not surprising that there are differences in their mechanisms and interactions of the markers found in each.

Following the model put forth by Lawrence Lessig in Code: Version 2.0,[14] the architecture of a given online community may be the single most important factor regulating the establishment of credibility within online communities. Some factors may be:

Many sites allow anonymous commentary, where the user-id attached to the comment is something like "guest" or "anonymous user". In an architecture that allows anonymous posting about other works, the credibility being impacted is only that of the product for sale, the original opinion expressed, the code written, the video, or other entity about which comments are made (e.g., a Slashdot post). Sites that require "known" postings can vary widely from simply requiring some kind of name to be associated with the comment to requiring registration, wherein the identity of the registrant is visible to other readers of the comment. These "known" identities allow and even require commentators to be aware of their own credibility, based on the fact that other users will associate particular content and styles with their identity. By definition, then, all blog postings are "known" in that the blog exists in a consistently defined virtual location, which helps to establish an identity, around which credibility can gather. Conversely, anonymous postings are inherently incredible. Note that a "known" identity need have nothing to do with a given identity in the physical world.

Linked to physical identity versus internet-based identity only

Architectures can require that physical identity be associated with commentary, as in Lessig's example of Counsel Connect.[15] However, to require linkage to physical identity, many more steps must be taken (collecting and storing sensitive information about a user) and safeguards for that collected information must be established-the users must have more trust of the sites collecting the information (yet another form of credibility). Irrespective of safeguards, as with Counsel Connect,[15] using physical identities links credibility across the frames of the internet and real space, influencing the behaviors of those who contribute in those spaces. However, even purely internet-based identities have credibility. Just as Lessig describes linkage to a character or a particular online gaming environment, nothing inherently links a person or group to their internet-based persona, but credibility (similar to "characters") is "earned rather than bought, and because this takes time and (credibility is) not fungible, it becomes increasingly hard" to create a new persona.[16]

In some architectures those who review or offer comments can, in turn, be rated by other users. This technique offers the ability to regulate the credibility of given authors by subjecting their comments to direct "quantifiable" approval ratings.

Architectures can be oriented around positive feedback or a mix of both positive and negative feedback. While a particular user may be able to equate fewer stars with a "negative" rating, the semantic difference is potentially important. The ability to actively rate an entity negatively may violate laws or norms that are important in the jurisdiction in which the internet property is important. The more public a site, the more important this concern may be, as noted by Goldsmith & Wu regarding eBay.[17]

Architectures can also be oriented to give editorial control to a group or individual. Many email lists are worked in this fashion (e.g., Freecycle). In these situations, the architecture usually allows, but does not require that contributions be moderated. Further, moderation may take two different forms: reactive or proactive. In the reactive mode, an editor removes posts, reviews, or content that is deemed offensive after it has been placed on the site or list. In the proactive mode, an editor must review all contributions before they are made public.

The field of cyberculture studies examines the topics explained above, including the communities emerging within the networked spaces sustained by the use of modern technology. Students of cyberculture engage with political, philosophical, sociological, and psychological issues that arise from the networked interactions of human beings by humans who act in various relations to information science and technology. 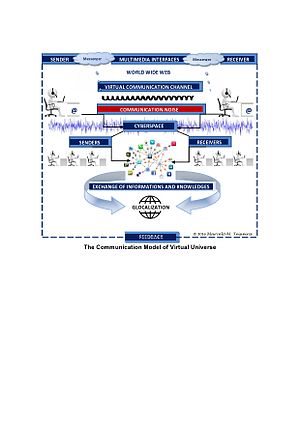 Communication model of a virtual universe

Donna Haraway, Sadie Plant, Manuel De Landa, Bruce Sterling, Kevin Kelly, Wolfgang Schirmacher, Pierre Levy, David Gunkel, Victor J.Vitanza, Gregory Ulmer, Charles D. Laughlin, and Jean Baudrillard are among the key theorists and critics who have produced relevant work that speaks to, or has influenced studies in, cyberculture. Following the lead of Rob Kitchin, in his work Cyberspace: The World in the Wires, we might view cyberculture from different critical perspectives. These perspectives include futurism or techno-utopianism, technological determinism, social constructionism, postmodernism, poststructuralism, and feminist theory.[18]

The technological convergence of the mass media is the result of a long adaptation process of their communicative resources to the evolutionary changes of each historical moment. Thus, the new media became (plurally) an extension of the traditional media on the cyberspace, allowing to the public access information in a wide range of digital devices.[19] In other words, it is a cultural virtualization of human reality as a result of the migration from physical to virtual space (mediated by the ICTs), ruled by codes, signs and particular social relationships. Forwards, arise instant ways of communication, interaction and possible quick access to information, in which we are no longer mere senders, but also producers, reproducers, co-workers and providers. New technologies also help to “connect” people from different cultures outside the virtual space, what was unthinkable fifty years ago. In this giant relationships web, we mutually absorb each other’s beliefs, customs, values, laws and habits, cultural legacies perpetuated by a physical-virtual dynamics in constant metamorphosis (ibidem). In this sense, Professor Doctor Marcelo Mendonça Teixeira created, in 2013, a new model of communication to the virtual universe, based in Claude Elwwod Shannon (1948) article "A Mathematical Theory of Communication".