From Infogalactic: the planetary knowledge core
Jump to: navigation, search
For the "Culture war" between the German state and Roman Catholic Church between 1871-1878, see Kulturkampf.

In the United States and the United Kingdom, culture war refers to a conflict between traditionalist or conservative values and progressive or liberal values. Beginning in the 1990s, culture wars have influenced the debate over public school history and science curricula in the United States, along with many other issues.

The expression culture war entered the vocabulary of United States politics with the publication of Culture Wars: The Struggle to Define America by James Davison Hunter in 1991. Hunter perceived a dramatic realignment and polarization that had transformed United States politics and culture, including the issues of abortion, federal and state gun laws, global warming, immigration, separation of church and state, privacy, recreational drug use, homosexuality, and censorship.

In Canada, culture war refers to differing values between Western versus Eastern Canada, urban versus rural Canada, as well as conservatism versus liberalism.[1]

The phrase "culture war" represents a loan translation (calque) from the German Kulturkampf. The German word Kulturkampf (culture struggle), refers to the clash between cultural and religious groups in the campaign from 1871 to 1878 under Chancellor Otto von Bismarck of the German Empire against the influence of the Roman Catholic Church.[2]

In American usage the term culture war may imply a conflict between those values considered traditionalist or conservative and those considered progressive or liberal. It originated in the 1920s when urban and rural American values came into clear conflict.[3] This followed several decades of immigration to the States by people whom earlier European immigrants considered "alien". It was also a result of the cultural shifts and modernizing trends of the Roaring 20s, culminating in the presidential campaign of Al Smith[4] in 1928. However, James Davison Hunter's 1991 book Culture Wars: The Struggle to Define America redefined the "culture war" in the United States of America. Hunter traces the concept to the 1960s.[5] The perceived focus of the American culture war and its definition have taken various forms since then.[6]

James Davison Hunter, a sociologist at the University of Virginia, introduced the expression again in his 1991 publication, Culture Wars: The Struggle to Define America. Hunter described what he saw as a dramatic realignment and polarization that had transformed American politics and culture.

He argued that on an increasing number of "hot-button" defining issues — abortion, gun politics, separation of church and state, privacy, recreational drug use, homosexuality, censorship — there existed two definable polarities. Furthermore, not only were there a number of divisive issues, but society had divided along essentially the same lines on these issues, so as to constitute two warring groups, defined primarily not by nominal religion, ethnicity, social class, or even political affiliation, but rather by ideological world-views.

Hunter characterized this polarity as stemming from opposite impulses, toward what he referred to as Progressivism and as Orthodoxy. Others have adopted the dichotomy with varying labels. For example, Fox News commentator Bill O'Reilly emphasizes differences between "Secular-Progressives" and "Traditionalists". 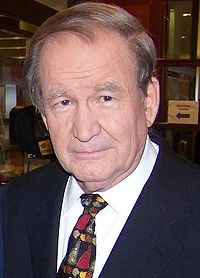 In 1990, commentator Pat Buchanan mounted a campaign for the Republican nomination for President against incumbent George H. W. Bush in 1992. He received a prime-time speech-slot at the 1992 Republican National Convention, to give his speech on the culture war.[7] He argued: "There is a religious war going on in our country for the soul of America. It is a cultural war, as critical to the kind of nation we will one day be as was the Cold War itself."[8] In addition to criticizing environmentalists and feminism, he portrayed public morality as a defining issue:

A month later, Buchanan characterized the conflict as about power over society's definition of right and wrong. He named abortion, sexual orientation and popular culture as major fronts – and mentioned other controversies, including clashes over the Confederate Flag, Christmas and taxpayer-funded art. He also said that the negative attention his "culture war" speech received was itself evidence of America's polarization.[9]

The Culture war had significant impact on national politics in the 1990s.[6] The rhetoric of the Christian Coalition of America may have weakened president George H.W. Bush's chances for reelection in 1992 and helped his successor, Bill Clinton, win reelection in 1996.[10] On the other hand, the rhetoric of conservative cultural warriors helped Republicans gain control of Congress in 1994.[11]

The culture wars influenced the debate over public-school history curricula in the United States in the 1990s. In particular, debates over the development of national educational standards in 1994 revolved around whether the study of American history should be a "celebratory" or "critical" undertaking and involved such prominent public figures as Lynne Cheney, Rush Limbaugh, and historian Gary Nash[12][13]

The liberal tide that marked the 1990s briefly died down in the early 2000s, with the 9/11 attacks changing priorities towards more social cohesion, but resurfaced once the Iraq War began. Peter Beinart in January 2009 said that the election of Barack Obama as President could be the beginning of the end for the American culture war. He wrote:

When it comes to culture, Obama doesn't have a public agenda; he has a public anti-agenda. He wants to remove culture from the political debate. He wants to cut our three-sided political game back down to two... Barack Obama was more successful than John Kerry in reaching out to moderate white evangelicals in part because he struck them as more authentically Christian. That's the foundation on which Obama now seeks to build. He seems to think there are large numbers of conservative white Protestants and Catholics who will look beyond culture when they enter the voting booth as long as he and other Democrats don't ram cultural liberalism down their throats.[14]

In response, author and writer Rod Dreher stated that the rhetoric of a culture war disguises the fact that American society truly is deeply divided on some moral issues, which is not an artificial creation of political parties seeking to drum up support. He wrote that the economic positions of the Democratic Party are generally popular enough that, if it chose to drop polarizing social issues, it would become a majority party in ongoing control. He describes the culture war as "inevitable".[15] Columnist Ross Douthat, then with The Atlantic, wrote that he had "a lot to agree with" Beinart, but depicted Obama and his supporters as apparently striving at "winning" the culture wars for their side rather than coming to some kind of compromise.[16]

In a February 2009 column in The New York Times, William Saletan stated that a holistic mix of left-wing and right-wing ideas would come out of the culture war. He wrote: "morality has to be practical, and that practicality requires morals". He concluded that conservatives should embrace family planning as a way to reduce abortion and government assistance while liberals should embrace personal responsibility, which means that unprotected sex is criticized "bluntly". He also advocated same-sex marriage as a way to lead LGBT Americans to an "ethic of mutual support and sacrifice" involving stricter personal responsibility.[17]

"Culture war" (or "culture wars") in Canada describes the polarization between the different values of Canadians. This can be West versus East, rural versus urban, or traditional values versus progressive values.[18] "Culture war" is a relatively new phrase in Canadian political commentary. It can still be used to describe historical events in Canada, such as the Rebellions of 1837, Western Alienation, Quebec sovereignty movement, and any Aboriginal conflicts in Canada, but is more relevant to current events such as the Caledonia conflict with Natives and the increasing hostility between conservative and liberal Canadians. Controversy erupted in 2010 when pollster Frank Graves suggested that the Liberal Party launch a "culture war" against the Conservative Party. "I told them that they should invoke a culture war. Cosmopolitanism versus parochialism, secularism versus moralism, Obama versus Palin, tolerance versus racism and homophobia, democracy versus autocracy. If the cranky old men in Alberta don't like it, too bad. Go south and vote for Palin."[19] The culture wars has also been used to describe the Harper government's attitude towards the arts community. Andrew Coyne termed this negative policy towards the arts community as 'class warfare'.[20] Its use has increased considerably recently on account of prorogation rallies, abortion, and the gun registry.[21]

Interpretations of Aboriginal history became part of the wider political debate sometimes called the 'culture wars' during the tenure of the Coalition government from 1996–2007, with the Prime Minister of Australia John Howard publicly championing the views of some of those associated with Quadrant.[22] This debate extended into a controversy over the way history was presented in the National Museum of Australia and in high school history curricula.[23][24] It also migrated into the general Australian media, with regular opinion pieces being published in major broadsheets such as The Australian, The Sydney Morning Herald and The Age. Marcia Langton has referred to much of this wider debate as 'war porn'[25] and an 'intellectual dead end'[26]

Two Australian Prime Ministers, Paul Keating and John Howard, were major participants in the "wars". According to the analysis for the Australian Parliamentary Library of Dr Mark McKenna,[27] Paul Keating (1991–1996) was believed by John Howard (1996–2007) to portray Australia pre-Whitlam in an unduly negative light; while Keating sought to distance the modern Labor movement from its historical support for the Monarchy and the White Australia policy by arguing that it was the Conservative Australian Parties who had been barriers to national progress and excessively loyal to the British Empire. He accused Britain of having abandoned Australia during World War II. Keating was a staunch advocate of a symbolic apology to indigenous people for the misdeeds of past governments, and outlined his view of the origins and potential solutions to contemporary Aboriginal disadvantage in his Redfern Park Speech (drafted with the assistance of historian Don Watson). In 1999, following the release of the 1998 Bringing Them Home Report, Howard passed a Parliamentary Motion of Reconciliation describing treatment of Aborigines as the "most blemished chapter" in Australian history, but he did not make a Parliamentary apology.[28] Howard argued that an apology was inappropriate as it would imply "intergeneration guilt" and said that "practical" measures were a better response to contemporary Aboriginal disadvantage. Keating has argued for the eradication of remaining symbols linked to British origins: including deference for ANZAC Day, the Australian Flag and the Monarchy in Australia, while Howard was a supporter of these institutions. Unlike fellow Labor leaders and contemporaries, Bob Hawke and Kim Beazley, Keating never traveled to Gallipoli for ANZAC Day ceremonies. In 2008 he described those who gathered there as "misguided".[29]

In 2006, John Howard said in a speech to mark the 50th anniversary of Quadrant that "Political Correctness" was dead in Australia but: "we should not underestimate the degree to which the soft-left still holds sway, even dominance, especially in Australia's universities"; and in 2006, Sydney Morning Herald Political Editor Peter Hartcher reported that Opposition foreign affairs spokesman Kevin Rudd was entering the philosophical debate by arguing in response that "John Howard, is guilty of perpetrating 'a fraud' in his so-called culture wars... designed not to make real change but to mask the damage inflicted by the Government's economic policies".[30]

The defeat of the Howard government in the Australian Federal election of 2007, and its replacement by the Rudd Labor government has altered the dynamic of the debate. Rudd made an official apology to the Stolen Generation[31] with bi-partisan support.[32] Like Keating, Rudd supports an Australian Republic, but in contrast to Keating, Rudd has declared support for the Australian flag and supports the commemoration of ANZAC Day and expressed admiration for Liberal Party founder Robert Menzies.[33][34]

Since the change of government, and the passage, with support from all parties, of a Parliamentary apology to indigenous Australians, Professor of Australian Studies Richard Nile has argued: "the culture and history wars are over and with them should also go the adversarial nature of intellectual debate",[35] a view contested by others, including conservative commentator Janet Albrechtsen.[36] An intention to reengage in the history wars has been indicated by the Federal Opposition's Christopher Pyne.[37]

Battleground issues in the "culture wars"