First Bristol[1] is a bus operator providing services in Bristol. It is a subsidiary of FirstGroup. 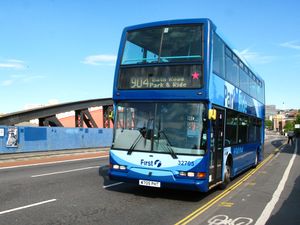 In September 1983 the National Bus Company split the operation in two, with the Cheltenham and Gloucester Omnibus Company taking the services in Cheltenham, Gloucester, Stroud and Swindon. The remainder stayed with the existing Bristol Omnibus Company divided into two business units: Citybus services for services within Bristol, Bristol Country Bus for services in Bath, Somerset and Wiltshire. In April 1985 Bristol Country Bus was rebranded Badgerline and in 1986 it assets were transferred to a separate legal entity[1] and privatized in September 1986 in a management buyout.[4]

FirstGroup operate the majority of services in Bristol with most of the rest operated by Wessex Bus. Other operators include Servernside Transport Limited and CT Plus.

First Bristol operate depots in Hengrove and Lawrence Hill.[7] A third depot, Muller Road, is leased to First from Bristol City Council, however it is only used for storing withdrawn buses due to structural issues including subsidence.