First Somerset & Avon[1] is a bus operator providing services in Bath, Somerset, South Gloucestershire and West Wiltshire. It is a subsidiary of FirstGroup. 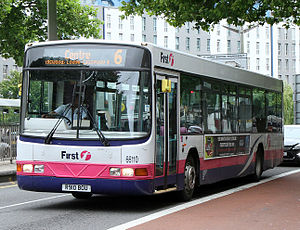 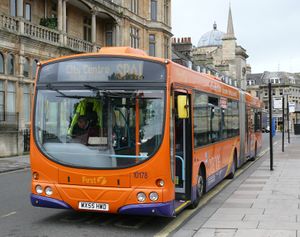 The company name First Somerset & Avon dates only from 2003, although the origins of the company date back to 1887. The company combines the former Badgerline operation that created FirstBus in April 1995, and the Somerset operations of Southern National, acquired in 1999.

Badgerline was formed in 1985 as the business name of the Bristol Country Bus operations (in South Gloucestershire, Bath, Somerset and Wiltshire) of the Bristol Omnibus Company (then part of the National Bus Company). In 1986 the operations were transferred to a separate legal entity[2] and privatised in September 1986 in a management buyout. After Badgerline merged with GRT Group to form FirstBus in April 1995, the operation was rebranded as First, although Badgerline Limited continued as the legal name of the operator.

In 2001 FirstGroup changed the legal structure of some of its bus operating subsidiaries. The legal entity which had been Badgerline Limited was renamed First City Line Limited and became the operator of Bristol city services (now First Bristol Limited).[2] The legal entity which had been First Bristol Buses Limited (which had previously been Bristol Omnibus Company, incorporated in 1887) was renamed First Somerset & Avon Limited in May 2003.[3] and became the operator of Badgerline's former services.

In 2013 buses started to be painted into the new FirstBus livery and 'West of England' branding was applied on both sides beneath the windows (on some single-decks the branding is applied above the windows towards the front of the bus). First Somerset & Avon is still printed on some tickets, while other tickets are printed with First Bristol & Avon or simply just First Bristol.

In February 2014, First's Bridgwater and Taunton business was rebranded as The Buses of Somerset in an unprecedented break from the FirstGroup corporate style. The business instead now sports a two-tone green and cream livery with bespoke branding, website and social media profiles.[5][6] These services were later transferred to First South West.

First Somerset & Avon operates an extensive network of services in and around Bath, Bristol, Trowbridge, Wells and Weston-super-Mare.