The Go-Ahead Group plc[2] is a leading provider of passenger transport in the UK, with over one billion journeys made on its bus and trains services each year. It is a FTSE 250 Index group listed on the London Stock Exchange. 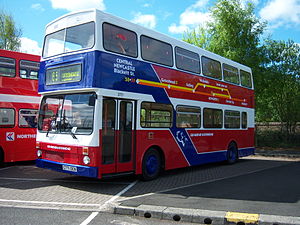 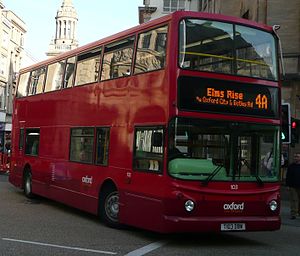 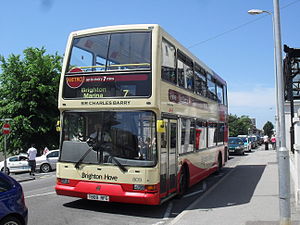 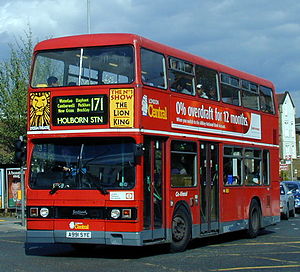 London Central Leyland Titan in Forest Hill in May 2001 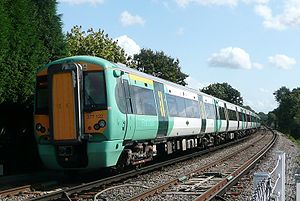 Southern Class 377 at Warnham in September 2008 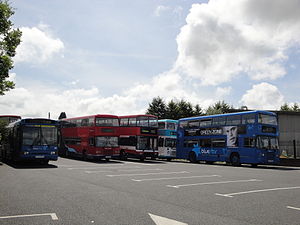 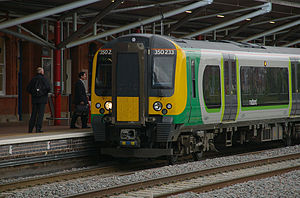 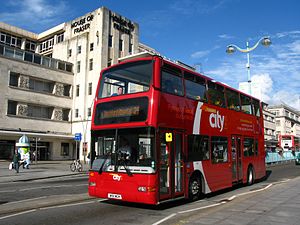 The Go-Ahead Group plc began as Go-Ahead Northern Limited in February 1987 on the privatisation of the National Bus Company, when a partial management buyout led by Martin Ballinger and Chris Moyes purchased its Gateshead-based northern division, known as the Northern General Transport Company.[3]

Despite bidding for a number of other larger bus operators in the intervening period, Go-Ahead's first major acquisition was Brighton & Hove in November 1993,[4][6][7] followed by the Oxford Bus Company and Wycombe Bus Company in March 1994.[4] In May 1997 the Brighton & Hove operation expanded with the acquisition of the former municipal operator Brighton Transport.[8] In September 1999 Metrobus, a large operator operating in London, Surrey and Sussex was acquired.[6][9]

Initially an unlisted public company owned 90% by management, in May 1994 Go-Ahead was floated on the London Stock Exchange.[4][10] In October 1994 Go-Ahead purchased London Central during the privatisation of London Buses.[3][7][11]

In March 1995 OK Motor Services was purchased and integrated into the Go North East operation.[11][12]

In June 1996 a second London bus operation, London General was acquired from the management team that had purchased it when privatised.[3][5][7]

In October 1996 Go-Ahead entered the UK rail market when it commenced operating the Thames Trains franchise which it ran until March 2004. The Thames Trains franchise was awarded by the Director of Passenger Rail Franchising to Victory Rail Holdings. Go-Ahead owned 65% of the shares in Victory Rail Holdings with the remaining 35% held by some ex British Rail managers and employees.[8] Go-Ahead bought the remaining shares it did not own in June 1998.[13]

Go-Ahead entered into a joint venture with VIA-GTI, taking a 65% stake in Govia. Govia ran the Thameslink franchise from March 1997 until March 2006.

In October 1998 Go-Ahead diversified into Airport Services with the acquisition of Gatwick Handling International, a provider of ground handling services at UK airports.[14]

In 2000 French government owned C3D made an unsuccessful takeover bid for the company.[15]

Wycombe Bus Company was sold to Arriva in December 2000.[17]

Go-Ahead acquired the ground handling operations of British Midland and Midland Airport Services in March 2001 followed by Reed Aviation in August 2001. Along with Go-Ahead's existing Gatwick Handling International operation, all were rebranded as Aviance.[17] In August 2001 Govia started running the South Central rail franchise. In October 2000 the Shadow Strategic Rail Authority awarded Govia the South Central rail franchise with operations due to commence in May 2003 when Connex's franchise expired.[18] Govia negotiated a deal with Connex to buy out the remainder of its franchise.[19][20]

In May 2002 Go-Ahead diversified again,[21] acquiring airport-focused Meteor Parking.[22] In August 2003 the Wilts & Dorset bus business was purchased.[23] Included in the purchase of Gatwick Handling International in 1998 was a 50% shareholding in Plane Handling. In August 2004 Go-Ahead purchased the remaining 50% from Virgin Aviation.[24]

In June 2005 Solent Blue Line and Southern Vectis were purchased.[24] In September 2005 the Lewes and Seaford operations of Stagecoach South were acquired and integrated into the Brighton & Hove business.[25]

In December 2005 Go-Ahead purchased The Birmingham Coach Company, which operated express coach under contract for National Express and local bus services in the West Midlands under the Diamond Bus name.[6][25] Go-Ahead had been known for some time to be keen to begin operating in the area. OI February 2006 another operator in the West Midlands, Probus Management Limited, trading as People's Express, was purchased.[6][25] In August 2006 the Birmingham Coach Company (trading as Diamond Bus) and Probus operations were regrouped under the Go West Midlands Limited legal entity, with the bus operations branded as Diamond in the West Midlands.

In November 2007 Govia commenced operating the London Midland rail franchise.[27] In December 2007 the Orpington services of First London were acquired.[29]

Out of the Midlands

Out of airports, into America

In January 2010 Go-Ahead sold most of its airport based operations to Dnata UK and Servisair.[31] In March 2010 Konectbus in Norfolk was purchased as well as the Hexham operations of Arriva North East and integrated into Go North East.[32] In August 2010 Go-Ahead America, a joint venture with Cook Illinois in which Go-Ahead held a 50% stake, commenced operating a yellow school bus contract in St Louis, Missouri.[32] In September 2010 Meteor Parking was sold to Vinci SA, bringing Go-Ahead's involvement in the aviation support industry to a close.[32]

Out of America, Thameslink regained

Into Germany and Singapore

In November 2015, Go-Ahead were awarded two rail contracts in Stuttgart, Germany. The contracts will commence in 2019/20.[37] In the same month, it was awarded a contract to operate 25 bus services in Singapore previously operated by SBS Transit under Loyang Bus Depot.[38]

The main distinguishing features of the Go-Ahead Group are the relatively high degree of autonomy the group offers its individual operating companies, and its focus on investing in local management. Unlike the other large UK bus operators (Arriva, First and Stagecoach), Go-Ahead does not apply a corporate livery or branding to its operations, rather leaving each to have a unique identity with subtle Go-Ahead signage (though London Buses must be painted red to comply with TfL requirements).