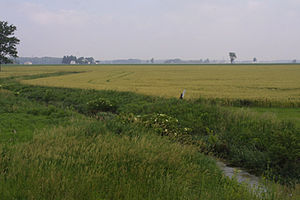 View from a ridge near Benton Ridge, Ohio, which demarks the edge of the former Great Black Swamp.

The ridge was formed at the southern shore of the ancient lake. In the distance, a completely flat expanse of agricultural land extends to the horizon. In the foreground a ditch used to drain the swamp is visible.[1][2]

The Great Black Swamp (also known simply as the Black Swamp), was a glacially fed wetland in northwest Ohio and extreme northeast Indiana, United States, that existed from the end of the Wisconsin glaciation until the late 19th century. Comprising extensive swamps and marshes, with some higher, drier ground interspersed, it occupied what was formerly the southwestern part of proglacial Lake Maumee, a holocene precursor to Lake Erie. The area was about 25 miles (40 km) wide (north to south) and 100 miles (160 km) long, covering an estimated 1,500 square miles (4,000 km2).[3] Gradually drained and settled in the second half of the 19th century, it is now highly productive farm land. During the second half of the 20th century, efforts were undertaken to preserve and restore portions of the swamp to its pre-settlement state. 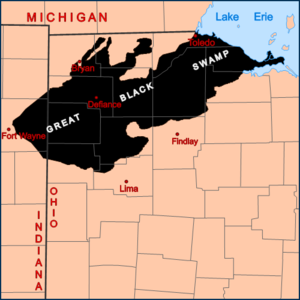 The general extent of the Great Black prior to the 19th century.

The land once covered by the swamp lies primarily within the Maumee River and Portage River watersheds in northwest Ohio and northeast Indiana. The boundary was determined primarily by ancient sandy beach ridges formed on the shores of Lakes Maumee and Whittlesey, after glacial retreat several thousand years ago. It stretched roughly from Fort Wayne, Indiana in the west, eastward to the Ottawa National Wildlife Refuge near Port Clinton along the Lake Erie shore, and from (roughly) US 6 south to Findlay[4] and North Star, Ohio.[5] Near its southern edge at the southwestern corner of present-day Auglaize County, the swamp was so impervious to travel that wheeled transportation was impossible during most of the year, and local residents thought the rigors of travel to be unsuitable for anyone except adult men.[6]

The vast Swamp was a network of forests, wetlands, and grasslands. In the lowest, flattest areas, prone to permanent inundation, deciduous swamp forests predominated, characterized especially by species of ash, elm, cottonwood and sycamore. In slightly higher areas with some topographic relief and better drainage, beech, maples, basswood, tuliptree and other more mesic species were dominant. On elevated beach ridges and moraines with good to excessive drainage, more xeric species, especially oak and hickory, were dominant. Unlike other swampy areas of the Great Lakes, such as northern Minnesota, there were no conifers (Sampson, 1930). The area contained non-forested wetlands, particularly marsh and wet prairies, with marshes being particularly extensive along the Lake Erie shoreline east of Toledo.

Although much of the area to the east, south, and north was settled in the early 19th century, the dense habitat and difficulty of travel through the swamp delayed its development by several decades. A corduroy road (from modern-day Fremont to Perrysburg) was constructed through the Maumee Road Lands in 1825 and paved with gravel in 1838, but travel in the wet season could still take days or even weeks. The impassibility of the swamp was an obstacle during the so-called Toledo War (1835–36); unable to get through the swamp, the Michigan and Ohio militias never came to battle. Settlement of the region was also inhibited by endemic malaria. The disease was a chronic problem for residents of the region until the area was drained and former mosquito-breeding grounds were dried up.

In the 1850s the states began an organized attempt to drain the swamp for agricultural use and ease of travel. Various projects were undertaken over a 40-year period. Local resident James B. Hill, living in Bowling Green, Ohio, in the mid-19th century, made the quick drainage of the Black Swamp possible with his invention of the Buckeye Traction Ditcher.[7] Hill's ditching machine laid drainage tiles at a record pace. The area was largely settled over the next three decades. The development of railroads and a local drainage tile industry are thought to have contributed greatly to drainage and settlement.[8]

The story of the first European settlement in 1833 in the Great Black Swamp at Lauber Hill is told in "Out of the Wilderness, History of the Central Mennonite Church," 1835-1960. O. Grieser and E. Beck, The Dean Hicks Company, Grand Rapids Michigan, 1960.