From Infogalactic: the planetary knowledge core
Jump to: navigation, search
Not to be confused with Warren, Ohio.

Warren County is a county located in Ohio. As of the 2010 census, the population was 212,693.[2] Its county seat is Lebanon.[3] The county was erected May 1, 1803, from Hamilton County, and named for Dr. Joseph Warren, a hero of the Revolution who sent Paul Revere on his ride and who died at the Battle of Bunker Hill.[4]

Warren County was created by the first Ohio General Assembly in the Act of March 24, 1803, which also created Butler and Montgomery Counties. The act defined Warren County as "all that part of the county of Hamilton included within the following bounds, viz.: Beginning at the northeast corner of the county of Clermont, running thence west with the line of said county to the Little Miami; thence up the same with the meanders thereof to the north boundary of the first tier of sections in the second entire range of townships in the Miami Purchase; thence west to the northeast corner of Section No. 7 in the third township of the aforesaid range; thence north to the Great Miami; thence up the same to the middle of the fifth range of townships; thence east to the County line; thence with same south to the place of beginning." Originally this included land now in Clinton County as far east as Wilmington.

Clinton County proved a continuing headache to the legislature. The Ohio Constitution requires that every county have an area of at least four hundred square miles (1,036 km²). Clinton County's boundaries were several times adjusted in an effort to comply with that clause of the constitution. One of them, the Act of January 30, 1815, detached a strip of land from the eastern side to give to Clinton. That would have left Warren under four hundred square miles (1,036 km²), so a portion of Butler County (the part of Franklin Township where Carlisle is now located) was attached to Warren in compensation. The 1815 act was as follows:

Except for the sections formed by the Great and Little Miamis, the sides are all straight lines.

The following exchange areas serve Warren County, listed with the area code and incumbent local exchange carrier (ILEC) abbreviation from above serving that exchange (list may not be up-to-date):

In local races, Warren County occasionally elected Democrats. In 1976, two of the three county commission seats were won by Democrats. Until the mid-1990s, Democrats regularly ran for county offices. While Republicans usually won, the Democrats were at least able to make races competitive. However, with the massive expansion in population in the 1990s, the county became extremely Republican, so much so that no Democrats even file for most offices. In the 1996, 2000, and 2004 elections, in which eight county offices were on the ballot, there were no Democratic candidates for any of them. In November 1999, the last Democrat to hold office in Warren County, a member of the Educational Service Center (county school board), lost her seat to a Republican.

Warren County has no native colleges or universities, but was the original site selected for Miami University which instead located in Oxford, Ohio in 1809. National Normal University, a teachers college, was located in Lebanon from 1855 until 1917 when it closed. Several colleges currently offer classes in Warren County at various locations, including Sinclair Community College of Dayton, the University of Cincinnati, and Wilmington College. Sinclair opened a branch in the Mason area in 2007. The University of Cincinnati owns 398 acres (1.61 km2) of land[18] at the intersections of I-71 and Wilmington road, but no plans for development on the site have been announced.

Warren County has one public airport, designated as Lebanon-Warren County Airport (I68). The runway is a 4502' x 65' paved and lighted North-South runway (01/19), and parallel taxiway. Navigation and communications equipment includes PAPI, AWOS, Pilot Controlled Lighting, and UNICOM. The airport runway, taxiway, and navigation equipment is owned by the County. The county leases a public terminal, but other facilities are privately owned and operated under contract by a Fixed base operator. The airport serves general and business aviation, but has no commercial airlines.

Warren County does not currently have passenger train service except for a scenic train that runs between Lebanon and Mason. Freight trains still serve Carlisle, and on a limited basis, Monroe, Mason, and Lebanon. Historically, there have been several trains that ran through the county whose stops became cities and villages. These trains include the Cincinnati, Lebanon and Northern Railway, the Middletown and Cincinnati Railroad, and the Little Miami Railroad whose path is now replaced by the Little Miami Bike Trail. There have been proposals to run commuter trains from Cincinnati to the Kings Island area, but none have ever found sufficient support or funding.[19]

There are currently no commercially navigable waterways in Warren County, but the Warren County Canal did operate in the 19th century as a branch of the Miami and Erie Canal, bringing freight to Lebanon by canal boat. Recreationally, the Little Miami River can be traveled by canoe or kayak for its length through the county, and motorized boating can be done at Caesar's Creek Lake.

Among its weekly papers are The Western Star, the oldest weekly in the state and the oldest newspaper west of the Appalachians published under its original name. It, like the Pulse-Journal in Mason and the Star-Press in Springboro, are owned by the parent of the Middletown Journal and the Dayton Daily News, Cox Communications. Other weeklies include the Franklin Chronicle.

For a time in the mid-1990s, Lebanon was the home of a commercial radio station, WMMA-FM, 97.3, but its owners sold out and the new owners moved the station to Hamilton County. In 2010, the only radio station in the county at the time, WLMH-FM, a student-run station at Little Miami High School in Hamilton Township went off the air. In 2012, the FCC removed it from their database and cancelled their license as a result of it being silent for over a year.

Warren County is assigned to the Cincinnati television market, but Dayton television stations treat it as part of their market as well. 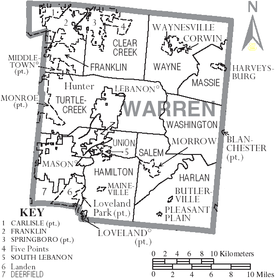 Map of Warren County, Ohio with municipal and township labels