King's College School, commonly referred to as KCS, King's or KCS Wimbledon, is an independent school located in Wimbledon in south-west London, United Kingdom. The school was founded in 1829 as the junior department of King's College London and occupied part of its premises in Strand, prior to relocating to Wimbledon in 1897. It is a member of the Eton Group of schools. As of September 2010, KCS accepts girls into the sixth form.[1] Starting September 2013 it has offered both the The International Baccalaureate and A-Levels.[2] 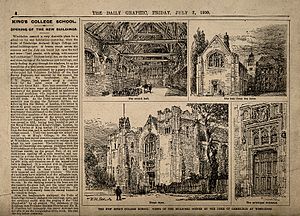 Opening of the New Buildings, July 7th, 1899; four sketches of the Great Hall

A Royal Charter by King George IV originally founded the School in 1829 as the junior department of the newly established King's College, London. The School occupied the basement of the College in The Strand. Most of its original eighty-five pupils lived in the City within walking distance of the School. During the early Victorian Period, the School grew in numbers and reputation. Members of the teaching staff included Gabriele Rossetti, who taught Italian. His son, Dante Gabriel, joined the School in 1837. The best known of the early masters was the water-colourist, John Sell Cotman. Nine of his pupils became practising artists and ten architects. By 1843 there were five hundred pupils and the need for larger premises eventually led to the move to Wimbledon in 1897. The School was progressive in its curriculum in many areas and appointed its first Science Master in 1855, at a time where very few schools taught science. The first Head Master, John Major, served the School between 1831–1866. Ninety-nine of the school's pupils from this period appear in the Dictionary of National Biography.

Until the 1880s, the School flourished. In 1882, only Eton College surpassed the total of thirty Oxford and Cambridge Board examination certificates obtained by pupils at KCS. But the School's teaching facilities were becoming increasingly inadequate as many competitor schools moved to new sites with modern facilities and large playing fields. In 1897, falling numbers of pupils prompted the move to the School's present site in Wimbledon, a fast-growing suburb well served by the railway lines from Surrey and south London. A separate junior school was opened on the same campus in 1912.

In World War I, many letters were written to the school, including some from the Battle of the Somme. During World War II, the school's Great Hall was damaged by bomb shrapnel, and some of the damage can still be seen on the outside of the hall.

The only remaining link between KCS and its former parent is that one of the KCS Board of Governors is nominated by King's College London. 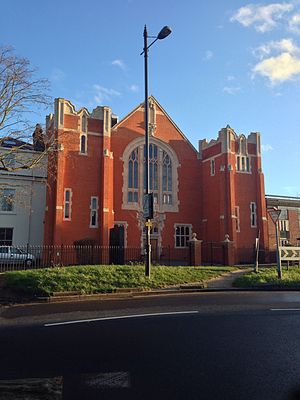 King's College School is one of the highest academically performing schools in the UK historically and to date, placing 5th in The Times GCSE Results league table in 2014, and 3rd in its results table for A-Level, IB, and Pre-U.[3] In the 2015 edition of Tatler Schools Guide, it was commented on that "No wonder Oxbridge loves KCS pupils: more than 150 places in the past three years." [4] On 21st November 2014, King's won the title of Sunday Times Independent Secondary School of the Year.[5]

Almost all pupils stay on into the sixth form and proceed to leave for the top universities - 50 to Oxbridge in 2013-4 - the rest to London University colleges or Russell Group universities, e.g. Durham and Bristol, to do traditional subjects. Increasing numbers are heading abroad – including Harvard, Stanford and Cornell.[11][12]

Oxbridge offer statistics are as follows:

Number and Percentage of each year receiving offers from Oxbridge: last few years[13] 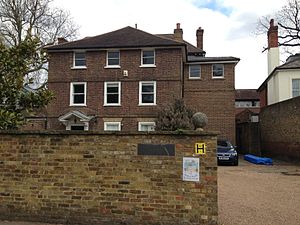 The majority of pupils come to the school from south west London, north Surrey and neighbouring areas. 64% of the Year 9 entry consists of boys who continue from the King's College Junior School, 34% enter from other preparatory schools and about 2% come from overseas. At a recent count around 450 applied for the 60 places available at 13+ entry. The Good Schools Guide described the school as "an inspiring place to be," adding, "Boys work and play very hard in this wonderful school community".[14] It is a member of the Eton Group of 12 leading independent schools, and of the Headmasters' and Headmistresses' Conference. Senior School fees are currently [2013-14] £18,900 per year.[15] 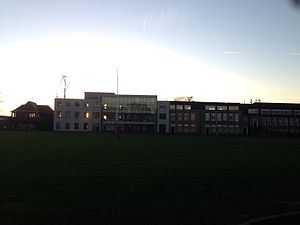 The last headmaster (Mr ACV Evans) won the best headmaster of a public school category at the annual Tatler School Awards 2005. Mark Palmer, editor of the Tatler School's Guide, said that he "thought it was about time it was recognised for being an all-round, academically excellent school", he added, "That has a lot to do with the professionalism and integrity of Tony Evans".[16] The school is currently under the headship of Mr AD Halls, who succeeded Tony Evans in January 2008. He too received Tatler's best headmaster of a public school award in 2011.[17]

The school is located on Southside, Wimbledon Common, on a 24-acre (97,000 m2) site, with the main building being the 19th century Great Hall. The school has 20 Science laboratories and a demonstration laboratory, alongside the 1st XV pitch. The buildings include the Q-block (based around the Quadrangle), College Court, South Hayes, the Taylor Wing, the Reeve School of Art & Design, and the Sports Hall, as well as the Junior School, which has its own buildings, and Rushmere house. There are four rugby pitches on the main site for use by the Senior School, with Coleman's field providing additional pitches for the Junior School. There are six tennis courts on site, four squash courts, a 33m swimming pool and a 25-metre shooting range. There are two additional playing field sites, in Raynes Park and on West Barnes Lane, which provide two fully lit astroturf pitches as well. A new pavilion was opened at West Barnes Lane in September 2011 to replace the old changing rooms.

The main sport during the autumn term is rugby, in which the school fielded 13 sides during the 2009-10 season. The fixture list for 2009-10 included Cranleigh, St. Paul's, Reed's, Dulwich, Eton, Harrow, Wimbledon College, Whitgift, RGS Guildford, King's Canterbury, St. John's Leatherhead and Tiffin. The First XV and the U15As enter the Daily Mail Cup, and reached the Quarter Finals of the U19 Cup in 2006 and 2007 and the semi-finals of the U15 Vase in 2008 and 2009. The school went on a tour to South Africa in 2010, winning every game.

In football the school reached the Final of the Trinity School's Cup in 2010, and plays a fixture list that includes Hampton, Dulwich, and Latymer. There are football tours every few years to Ireland, and preseason training takes place at Bisham abbey during the Christmas holidays. In hockey the school also competes, playing schools like RGS, KGS, and Caterham. There are hockey tours every three years, with the next tour probably happening in 2011.

In the summer, the main sport is cricket. The school plays cricket against schools in 2009 that included Whitgift, Dulwich, Winchester, St. Paul's and St. John's Leatherhead. The success of the cricket teams has suffered slightly due to the early nature of the school's IB exams in comparison to other schools who do A-levels, meaning fewer players in the U6th play, with resulting knock on effects in lower teams. The school's cricket team also tours around every three years, the last tour being to Barbados in 2008. Tennis is also played during the summer, with training camps in Majorca.

Rowing is a popular sport throughout the year. The boat club races in the regatta season, culminating with Henley Royal Regatta, where it reached the second round of the Princess Elizabeth Challenge Cup in 2004, 2005, 2008, 2009, 2010, 2013 and 2014. The 1st VIII also race in the National Schools Regatta, having won the Child Beale Cup in 2004 and 2012, with silver in the same category in 2015, and reaching the final of the Championship 8s category in 2013 and 2014. Boats also participate in the School's Head of the River Race, achieving a Gold Medal in 1st 8+s in 2013, and the National Junior Sculling Head. The school boathouse is used by the Cambridge University Boat Club in their preparation for and participation in The University Boat Races.

There are six houses in the Senior School named after previous headmasters and notable old boys of the school. Boys wear a standard red and blue school tie until they achieve 6 house points, at which point they are awarded the right to wear a house tie of navy blue with thin stripes of the following colours:

House points are awarded for participation in inter-house competitions throughout the year.

Each house typically has three or four Senior Prefects (one of which is appointed as House Captain) and around 8 Prefects. In addition, there is a Captain of School and two Vice-Captains of School.

King's College Junior School (also known as KCJS) is the preparatory school for King's College School located in Wimbledon, London. It was established in its own right in 1912, and educates boys from ages 7–13.[18] It occupies the same campus as the senior school. 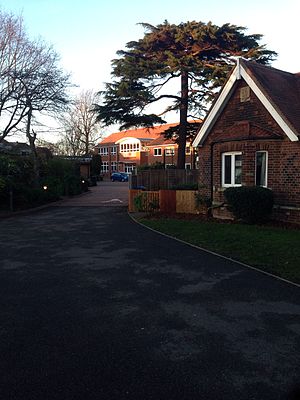 The uniform is a red blazer with the emblem in blue on the top pocket. Every boy wears a white shirt and grey shorts or trousers. The ties are similar to the Senior School ties, and prefects in the top year ("Upper Remove") wear Senior School ties.

The Junior School has featured in national competitions too[citation needed] - they were National Rugby Champions at U13 level in 2009. In the same year the Junior School ran away with the team prize on its return to the national Townsend-Warner Competition for History and had twelve pupils qualify for the UK Junior Mathematics Olympiad. They went on to win the Townsend-Warner Prize again in 2010 and 2011.

All boys are allocated to one of the school's four houses when they join (siblings are placed into the same house):

The following have been Head Masters of King's College School:[20]

Five Old King's have been awarded the Victoria Cross.[24]