North Myrtle Beach is a coastal resort city in Horry County, South Carolina, United States. It was created in 1968 from four existing municipalities north of Myrtle Beach, and serves as one of the primary tourist towns along the Grand Strand. As of the 2010 census, the population was 13,752, with the Myrtle Beach-North Myrtle Beach-Conway combined statistical area population of 329,449.

The area is divided into four separate areas based on its former municipalities. These are Windy Hill, Crescent Beach, Ocean Drive, and Cherry Grove, a spit bordering North Carolina. Atlantic Beach, which lies inside of North Myrtle Beach, chose to remain its own town during the merger.

The current city government has pursued a policy of growth through annexation and in October 2008 annexed 2.1 square miles (5.4 km2) that resulted in the city extending from the North Carolina state line to the city limits of Myrtle Beach.

There were 5,406 households out of which 15.1% had children under the age of 18 living with them, 47.5% were married couples living together, 6.9% had a female householder with no husband present, and 42.1% were non-families. 33.2% of all households were made up of individuals and 11.0% had someone living alone who was 65 years of age or older. The average household size was 2.03 and the average family size was 2.53. 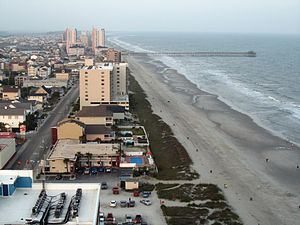 On May 7, 1968, the SC Legislature passed legislation incorporating the four towns of Cherry Grove, Ocean Drive Beach, Crescent Beach and Windy Hill into one city – the City of North Myrtle Beach. The city's celebration of its 40th anniversary is recorded in article entitled 'North Myrtle Beach celebrates forty years of incorporation'.

North Myrtle Beach is home to a single terminal, the Grand Strand Airport, serving primarily banner planes and small aircraft. The airfield is located in the heart of the city. The airport generates over $10.1 million in local economic output.

(In order of location)