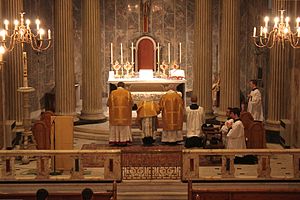 Confiteor said by the priest at a Solemn Mass

In Roman Catholicism and Lutheranism, the Penitential Rite, also known as Confession and Absolution, is a form of general confession that takes place at the start of each Divine Service or Mass.

In the ordinary form of the Roman Rite Mass

The formula of absolution which concludes all three formulas is:

℣ (Priest): "May almighty God have mercy on us, forgive us our sins, and bring us to everlasting life."
℟ (Congregation): "Amen."

The Penitential Act is followed by the Kyrie eleison chant (unless the third of the three formulas, which incorporates the Kyrie, has been chosen as the Penitential Act), the Gloria (if used), and the Collect, which concludes the Introductory Rites.[2]

If certain celebrations are combined with Mass, then the Penitential Act and other parts of the Introductory Rites are omitted or performed in a different way.[3] An example is the Mass of Ash Wednesday, in which the Penitential Act is replaced by the blessing and imposition of ashes after the homily.

"On Sundays, especially in the Season of Easter, in place of the customary Penitential Act, from time to time the Blessing and Sprinkling of Water to recall Baptism may take place."[4]

In the Tridentine Mass the Confiteor prayer is part of the Prayers at the Foot of the Altar. The formula in Liturgical Latin is:

The formula of absolution, known by its incipit Indulgentiam absolutionem, which concludes the rite is:

Pastor: "If we say we have no sin, we deceive ourselves, and the truth is not in us. "
People: "But if we confess our sins, God who is faithful and just will forgive our sins and cleanse us from all unrighteousness. "
Pastor: "Let us then confess our sins to God our Father. "
People: "Most merciful God, we confess that we are by nature sinful and unclean. We have sinned against you in thought, word, and deed, by what we have done and by what we have left undone. We have not loved You with our whole heart; we have not loved our neighbors as ourselves. We justly deserve Your present and eternal punishment. For the sake of Your Son, Jesus Christ, have mercy on us. Forgive us, renew us, and lead us, so that we may delight in Your will and walk in Your ways to the glory of your Holy Name. Amen. "
Pastor: "In the mercy of almighty God, Jesus Christ was given to die for us, and for His sake God forgives us all our sins. To those who believe in Jesus Christ He gives the power to become the children of God and bestows on them the Holy Spirit. May the Lord, who has begun this good work in us, bring it to completion in the day of our Lord Jesus Christ.[7]"