Extraordinary form of the Roman Rite 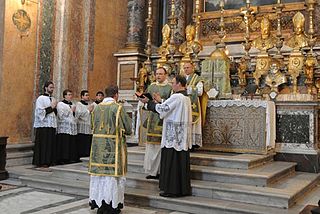 "Ite missa est" sung by the deacon at a Solemn Mass.

"An extraordinary form of the Roman Rite" is a phrase used in Pope Benedict XVI's 2007 motu proprio Summorum Pontificum to describe the liturgy of the 1962 Roman Missal, widely referred to as the Tridentine Mass. The phrase distinguishes the liturgy of the Missal issued by Pope John XXIII in 1962 from that of the Missal revised by Pope Paul VI in 1969 (the "ordinary form"), which "obviously is and continues to be the normal Form – the Forma ordinaria – of the Eucharistic Liturgy".[1]

Use of the phrase

The full text of Article 1 of the motu proprio is:

Art 1. The Roman Missal promulgated by Pope Paul VI is the ordinary expression of the lex orandi (rule of prayer) of the Catholic Church of the Latin rite. The Roman Missal promulgated by Saint Pius V and revised by Saint John XXIII is nonetheless to be considered an extraordinary expression of the same lex orandi of the Church and duly honoured for its venerable and ancient usage. These two expressions of the Church's lex orandi will in no way lead to a division in the Church's lex credendi (rule of faith); for they are two usages of the one Roman rite.

It is therefore permitted to celebrate the Sacrifice of the Mass following the typical edition of the Roman Missal, which was promulgated by Blessed John XXIII in 1962 and never abrogated, as an extraordinary form of the Church's Liturgy. The conditions for the use of this Missal laid down by the previous documents Quattuor Abhinc Annos and Ecclesia Dei are now replaced as follows:[2]

The context of the expression in the accompanying letter is as follows:

The last version of the Missale Romanum prior to the Council, which was published with the authority of Pope John XXIII in 1962 and used during the Council, will now be able to be used as a Forma extraordinaria of the liturgical celebration. It is not appropriate to speak of these two versions of the Roman Missal as if they were "two Rites". Rather, it is a matter of a twofold use of one and the same rite.
As for the use of the 1962 Missal as a Forma extraordinaria of the liturgy of the Mass, I would like to draw attention to the fact that this Missal was never juridically abrogated and, consequently, in principle, was always permitted. At the time of the introduction of the new Missal, it did not seem necessary to issue specific norms for the possible use of the earlier Missal.[1]