Peter the Great (Catalan: Pere el Gran, Aragonese: Pero lo Gran; 1239, in Valencia – 11 November 1285)[1] was the King of Aragon (as Peter III) of Valencia (as Peter I), and Count of Barcelona (as Peter II) from 1276 to his death. At the invitation of some rebels, he conquered Sicily and became its king in 1282, pressing the claim of his wife, Constance. He was one of the greatest of medieval Aragonese monarchs.

Peter was the eldest son of James I of Aragon and his second wife Violant of Hungary. Among (opportunistic) betrothals of his youth, he was betrothed to Eudoxia Laskarina, the youngest daughter of Emperor Theodoros II of Nicaea, in or before 1260. This contract was dissolved, however, after Eudoxia's brother lost the imperial throne in 1261, and Eudoxia was instead married to the Count of Tenda. On 13 June 1262, Peter married Constance, daughter and heiress of Manfred of Sicily. During his youth and early adulthood, Peter gained a great deal of military experience in his father's wars of the Reconquista against the Moors.[2]

On James' death in 1276, the lands of the Crown of Aragon were divided, with Aragon and Valencia, along with the most of the Catalan counties, going to Peter as the eldest son, while the Balearic Islands (constituted as the Kingdom of Majorca), the Catalan counties of Rousillon-Vallespir, Conflent and Capcir, and the territories in the Languedoc (lordship of Montpellier), went to the second son, James. Peter and Constance were crowned in Zaragoza (the capital of the Aragonese Kingdom) in November 1276 by the archbishop of Tarragona. At this ceremony, Peter renounced all feudal obligations to the papacy which his grandfather Peter II had incurred.

Peter's first act as king was to complete the pacification of his Valencian territory, an action which had been underway before his father's death.

However, a revolt soon broke out in Catalonia, led by the viscount of Cardona and abetted by Roger-Bernard III of Foix, Arnold Roger I of Pallars Sobirà, and Ermengol X of Urgell.[2] The rebels had developed a hatred for Peter as a result of the severity of his dealings with them during the reign of his father. Now they opposed him for not summoning the Catalan cortes, or assembly, and confirming its privileges after his ascension to the throne.

At the same time, a succession crisis continued in the County of Urgell. When Count Álvaro died in 1268, the families of his two wives, Constance, a daughter of Pedro Moncada of Béarn, and Cecilia, a daughter of Roger-Bernard II of Foix, began a long fight over the inheritance of his county. Meanwhile, a good portion of the county had been repossessed by Peter's father, James I, and was thus inherited by Peter in 1276. In 1278, Ermengol X, Álvaro's eldest son, succeeded in recovering most of his lost patrimony and came to an agreement with Peter whereby he recognised the latter as his suzerain.[2]

In 1280, Peter defeated the stewing rebellion led by Roger-Bernard III after besieging the rebels in Balaguer for a month. Most of the rebel leaders were imprisoned in Lleida until 1281, while Roger-Bernard was imprisoned until 1284.

When Muhammad I al-Mustansir, the Hafsid Emir of Tunisia who had put himself under James the Conqueror, died in 1277, Tunisia threw off the yoke of Aragonese suzerainty.[3] Peter first sent an expedition to Tunis in 1280 under Conrad de Llansa designed to re-establish his suzerainty.[2] In 1281, he himself prepared to lead a fleet of 140 ships with 15,000 men to invade Tunisia on behalf of the governor of Constantine.[4] The fleet landed at Alcoyll (now Collo, Algeria) in 1282. It was these Aragonese troops that received a Sicilian embassy after the Vespers of 30 March asking Peter to take their throne from Charles of Anjou. 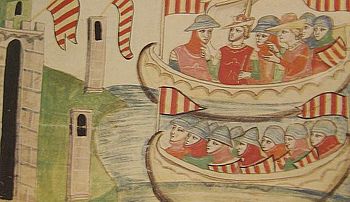 Peter's fleet landing at Trapani. The king is depicted directing the landing, second from left in the upper boat, wearing the crown and a red tunic.
Main article: War of the Sicilian Vespers

Peter was the direct descendant and the heir-general of Mafalda (Matilda), daughter of Robert Guiscard, Duke of Apulia, the Norman conqueror, and his official wife Sigelgaita, daughter of Guaimar IV of Salerno, a Lombard prince. After the ducal family of Apulia became extinct with William II in 1127, Mafalda's heirs (then the counts of Barcelona via her marriage to Ramon Berenguer II) apparently became the de jure heirs of Guiscard and Sigelgaita; thus Peter was dormantly a claimant to the Hauteville (Norman) succession of southern Italy. More directly, he was the heir of Manfred of Sicily in right of his wife, Constance (Manfred's oldest daughter). The Kingdom of Sicily and its successor kingdoms were to be a tenaciously-pursued inheritance for the Aragonese royal house and its heirs for the next five centuries.

The Italian physician John of Procida acted on behalf of Peter in Sicily. John had fled to Aragon after Charles' success at Tagliacozzo. John travelled to Sicily to stir up the discontents in favour of Peter and thence to Constantinople to procure the support of Michael VIII Palaeologus.[5] Michael refused to aid the Aragonese king without papal approval, and so John voyaged to Rome and there gained the consent of Pope Nicholas III, who feared the ascent of Charles in the Mezzogiorno. John then returned to Barcelona but the pope died, to be replaced by Simon de Brion, a Frenchman and a staunch ally of Charles. This set the stage for the upcoming conflict.

After receiving an embassy from the people of Palermo at Alcoyll, Peter landed at Trapani on 30 August 1282.[5] He was proclaimed king in Palermo on 4 September. Charles was forced to flee across the Straits of Messina and be content with his "Kingdom of Naples". Simon de Brion, now Pope Martin IV, excommunicated both Peter and the Byzantine emperor for providing Peter III with 60,000 gold pieces to invade Sicily (18 November).[6]

Peter nevertheless pressed his advantage and by February 1283 had taken most of the Calabrian coastline. Charles, perhaps feeling desperate, sent letters to Peter demanding they resolve the conflict by personal combat. The invader accepted and Charles returned to France to arrange the duel. Both kings chose six knights to settle on places and dates, and a duel was scheduled for 1 June at Bordeaux. A hundred knights would accompany each side and Edward I of England would adjudge the contest; the English king, heeding the pope, however, refused to take part. Peter left John of Procida in charge of Sicily and returned via his own kingdom to Bordeaux, which he entered in disguise to evade a suspected French ambush. Needless to say, no combat ever took place and Peter returned to find a very turbulent Aragon.[7]

While Peter was back on the mainland, his admiral, Roger of Lauria, was wreaking havoc in the Mediterranean Sea. He routed Charles' fleets several times and conquered Malta for Aragon.

Peter was dealing with domestic unrest at the time when the French were preparing an invasion of Aragon. He took Albarracín from the rebellious noble Juan Núñez de Lara, he renewed the alliance with Sancho IV of Castile, and he attacked Tudela in an attempt to prevent Philip I, the king of Navarre and the son of the French king Philip III the Bold, from invading on that front. Peter held meetings of the cortes at Tarragona and Zaragoza in 1283. He was forced to grant the Privilegio General to the newly formed Union of Aragon.[7]

Also in 1283, Peter's brother James II of Majorca joined the French and recognised their suzerainty over Montpellier. This gave the French free passage into Catalonia through Roussillon as well as access to the Balearic Islands. In October, Peter began preparing the defences of Catalonia. In 1284, Pope Martin IV granted the Kingdom of Aragon to Charles, Count of Valois, another son of the French king and great-nephew of Charles of Anjou. Papal sanction was given to a war — crusade — to conquer Aragon on behalf of Charles of Valois. 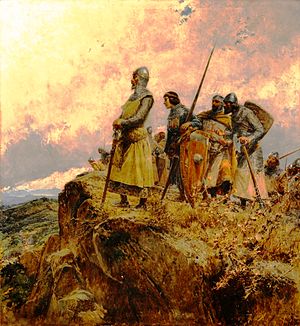 In 1284, the first French armies under King Philip and Count Charles entered Roussillon. They included 16,000 cavalry, 17,000 crossbowmen, and 100,000 infantry, along with 100 ships in south French ports.[8] Though the French had James's support, the local populace rose against them. The city of Elne was valiantly defended by the so-called bâtard de Roussillon ("bastard of Roussillon"), the illegitimate son of Nuño Sánchez, late count of Roussillon (1212–1242). Eventually he was overcome and the cathedral was burnt; the royal forces progressed.

In 1285, Philip entrenched himself before Girona in an attempt to besiege it. The resistance was strong, but the city was taken. Charles was crowned there, but without an actual crown. The French soon experienced a reversal, however, at the hands of Roger de Lauria, back from the Italian theatre of the drawn-out conflict. The French fleet was defeated and destroyed at the Battle of Les Formigues on 4 September 1285. In addition, the French camp was hit hard by an epidemic of dysentery.

Philip himself was afflicted. Philip I of Navarre, the heir to the French throne, opened negotiations with Peter for free passage for the royal family through the Pyrenees. But the troops were not offered such passage and were decimated at the Battle of the Col de Panissars. Philip III of France died in October at Perpignan, the capital of James II of Majorca (who had fled in fear after being confronted by Peter), and was buried in Narbonne. James was declared a vassal of Peter.

Peter matched his father in patronage of the arts and literature, but unlike him he was a lover of verse, not prose. He favoured the troubadours, of which he himself was one, and wrote two sirventesos. The first is in the form of an exchange between Peter and one Peironet, a jongleur. The second forms part of a compilation of five compositions from Peter, Bernat d'Auriac, Pere Salvatge (perhaps the same as Peironet), Roger-Bernard III of Foix, and an anonymous contributor.

As well, the wars with Philip of France and James of Majorca furnished material for new sirventesos and during this period the sirventes was converted into a convenient tool of political propaganda in which each side could, directly or allegorically, present its case and procure sympathy propitious to its cause. 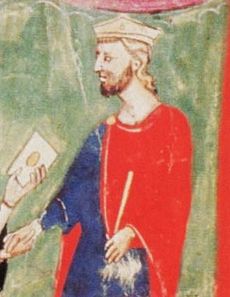 Peter died from unknown causes at Vilafranca del Penedès on 11 November 1285,[1] just one month after his royal foe Philip III of France, and was buried in the Monastery of Santes Creus.[9] His deathbed absolution occurred after he declared that his conquests had been in the name of his familial claims and never against the claims of the church. His remains are entombed in a porphyry sarcophagus at the monastery.

Like his father, Peter divided his kingdoms between his sons. He left Aragon to his eldest son, Alfonso, and Sicily to his second son, James. Peter's third son, Frederick, in succession to his brother James, became regent of Sicily and in due course its king. Peter did not provide for his illegitimate youngest son and namesake, Peter (1275 – 25 August 1296), who married Constança Mendes da Silva, daughter of Soeiro Mendes Petite, governor of Santarém in Portugal. This Peter left Spain for Portugal with his half-sister Elizabeth.

Peter also had two daughters, Elizabeth, who married Denis of Portugal, and Yolanda, who married Robert of Naples.

In the Divine Comedy, Dante Alighieri sees Peter "singing in accord" (d'ogni valor portó cinta la corda) with his former rival, Charles I of Sicily, outside the gates of Purgatory.