Perpignan (French: [pɛʁ.pi.ɲɑ̃]; Catalan: Perpinyà [pərpiˈɲa]) is a city, a commune and the capital of the Pyrénées-Orientales department in southern France. Perpignan was the capital of the former province and county of Roussillon (Rosselló in Catalan) and continental capital of the Kingdom of Majorca in the 13th and 14th centuries.

Perpignan is located in the center of the Roussillon plain, 13 km west of the Mediterranean coast.

Perpignan is crossed by the largest river in Roussillon, the Têt, and by one of its tributaries, the Basse. Floods often occur, as in 1892 when the rising of the Têt in Perpignan destroyed 39 houses, leaving more than 60 families homeless.[1]

Perpignan is served by the Gare de Perpignan railway station, which offers connections to Paris, Barcelona, Toulouse and several regional destinations. The motorway A9 connects Perpignan with Barcelona and Montpellier. The nearest airport is Perpignan – Rivesaltes Airport.

The name of Perpignan appears in 927 as Perpinianum, followed in 959 by Villa Perpiniano, Pirpinianum in the 11th century, Perpiniani in 1176. Perpenyà, which appears in the 13th century, is the most common form until the 15th century and is still used in the 17th century

Though settlement in the area goes back to Roman times, the medieval town of Perpignan seems to have been founded around the beginning of the 10th century. Soon Perpignan became the capital of the counts of Roussillon. Historically, it was part of the region known as Septimania. In 1172 Count Girard II bequeathed his lands to the Counts of Barcelona. Perpignan acquired the institutions of a partly self-governing commune in 1197. French feudal rights over Roussillon were given up by Louis IX in the Treaty of Corbeil.

When James I, the Conqueror, king of Aragon and count of Barcelona, founded the Kingdom of Majorca in 1276, Perpignan became the capital of the mainland territories of the new state. The succeeding decades are considered the golden age in the history of the city. It prospered as a centre of cloth manufacture, leather work, goldsmiths' work, and other luxury crafts. King Philip III of France died there in 1285, as he was returning from his unsuccessful crusade against the Aragonese Crown.

In 1344 Peter IV of Aragon annexed the Kingdom of Majorca and Perpignan once more became part of the County of Barcelona. A few years later it lost approximately half of its population to the Black Death. It was attacked and occupied by Louis XI of France in 1463; a violent uprising against French rule in 1473 was harshly put down after a long siege, but in 1493 Charles VIII of France, wishing to conciliate Castile in order to free himself to invade Italy, restored it to Ferdinand II of Aragon.

Again besieged and captured by the French during the Thirty Years' War in September 1642, Perpignan was formally ceded by Spain 17 years later in the Treaty of the Pyrenees, and from then on remained a French possession.

Perpignan is twinned with: 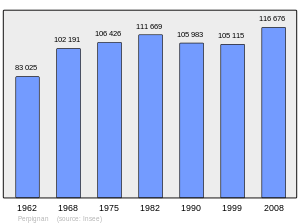 Since 2004, the free three-day Guitares au Palais is held each year in the last weekend of August in the Palace of the Kings of Majorca. The festival has a broad mainstream focus with pop-related music as well as traditional acoustic guitar music and alternative music. The festival has attracted international guests like Caetano Veloso (2007), Rumberos Catalans, Pedro Soler, Bernardo Sandoval, Peter Finger, Aaron and Bryce Dessner (2008). 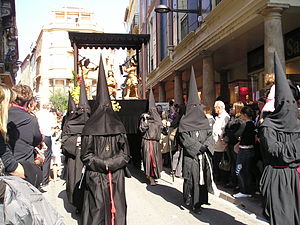 The famous "Sanch Procession" folklore, once forbidden by the Church, is still celebrated in Perpignan, Arles-sur-Tech and Collioure.

In 2008, Perpignan became Capital of Catalan Culture.[8] In Perpignan many street name signs are in both French and Catalan.

Perpignan is a rugby stronghold: their rugby union side, USA Perpignan, is a regular competitor in the Heineken Cup and seven times champion of the Top 14 (most recently in 2009), while their rugby league side plays in the First Utility Super League under the name Catalans Dragons. The Dragons missed out on a victory as the first ever French club to make it to a Challenge Cup Final at Wembley Stadium in 2007, losing 30-8 against St. Helens in front of 84,000 people.

Traditional commerce was in wine and olive oil, corks (the cork oak Quercus suber grows in Perpignan's mild climate), wool and leather, and iron. In May 1907 it was a seat of agitation by southern producers for government enforcement of wine quality following a collapse in prices. JOB rolling papers are currently manufactured in Perpignan.

The 13th-century Palace of the Kings of Majorca sits on the high citadel, surrounded by ramparts, reinforced for Louis XI and Charles V, which were updated in the 17th century by Louis XIV's military engineer Vauban.

The walls surrounding the town, which had been designed by Vauban, were razed in 1904 to accommodate urban development. The main city door, the Castillet is a small fortress built in the 14th century, which has been preserved. It had also been used as a prison until the end of the 19th century.[10]

The Hôtel Pams is a lavishly-decorated mansion designed for Jules Pams that illustrates the artistic taste of the wealthy bourgeois at the turn of the 20th century.[11]

Sadi Carnot and Vauban walkways and the river Bassa

Perpignan has a close connection with the sculptor Aristide Maillol, who attended school there.

Following a visit in 1963, the Spanish surrealist artist Salvador Dalí declared the city's railway station the centre of the Universe, saying that he always got his best ideas sitting in the waiting room. Dalí's painting La Gare de Perpignan commemorates his vision of "cosmogonic ecstasy" there on September 19, 1963.[12] He followed that up some years later by declaring that the Iberian Peninsula rotated precisely at Perpignan station 132 million years ago – an event the artist invoked in his 1983 painting Topological Abduction of Europe – Homage to René Thom.[13] Above the station is a monument in Dali's honour, and across the surface of one of the main platforms is painted, in big letters, «perpignan centre du monde» (French for "perpignan centre of the world").[14] 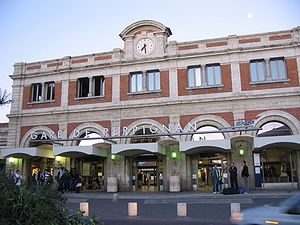