Princess Michael of Kent (Marie Christine Anna Agnes Hedwig Ida; née von Reibnitz; born 15 January 1945) is a member of the British Royal Family of German and Hungarian descent. She is married to Prince Michael of Kent, a grandson of King George V.

Princess Michael was an interior designer before becoming an author; she has written several books on European royalty (mostly her cousins). She also undertakes lecture tours as well as supporting her husband in his public duties. The Kents do not have an official programme of royal duties, although from time to time they represent Queen Elizabeth II overseas.

Princess Michael of Kent was born on 15 January 1945, in Karlsbad, a town then in German-populated Sudetenland and now known as Karlovy Vary in the Czech Republic. She was born just prior to the defeat and the end of Nazi Germany and World War II in Europe, near the family estates of her Austrian maternal grandmother, Princess Hedwig von Windisch-Graetz; the expulsion of Germans resident in Czechoslovakia followed later that year. Princess Michael is the younger daughter of Baron Günther Hubertus von Reibnitz (Freiherr) by his wife Countess Maria-Anna-Carolina-Franziska-Walpurga-Bernadette, daughter of Count Friedrich Szapáry von Muraszombath, Széchysziget und Szapár, the Austro-Hungarian Ambassador to Saint Petersburg at the outbreak of World War I. Princess Michael's elder sister was Margarita (born 18 January 1924) by her father's first marriage to Margherita, Countess von Seherr-Thoß.

Through her mother, Princess Michael is descended from Diane de Poitiers,[2] Henry II of France's mistress,[3] and Catherine (de' Medici),[4] Queen of France,[5] as well as from the celebrated painter Peter Paul Rubens.[6] Her father was a Nazi party member serving as a Sturmbannführer (Major) in the SS during the Second World War;[7] he settled at Maforga, Mozambique after being divorced. Her mother and brother, Baron Friedrich (Fred) von Reibnitz moved to Australia; the Freiin Marie-Christine established a beauty salon, while Fred von Reibnitz (now living in Canberra) joined the Australian Public Service.[8] 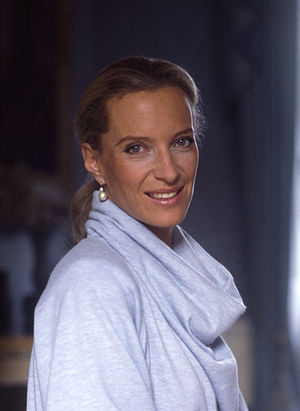 Her first husband was the English banker Thomas Troubridge, younger brother of Sir Peter Troubridge, 6th Bart. They met at a boar hunt in Germany and were married on 14 September 1971 at Chelsea Old Church, London. The couple separated in 1973 and divorced in 1977, with the marriage being formally annulled by the Pope in May 1978.

One month after the annulment, on 30 June 1978, at a civil ceremony in Vienna, Austria, she married Prince Michael of Kent, the son of Prince George, Duke of Kent (1902–1942) and Princess Marina of Greece and Denmark (1906–1968). Prince Michael is a first cousin of Queen Elizabeth II. Upon their marriage, she was accorded the style and title of Her Royal Highness Princess Michael of Kent, the female equivalent to her husband's title: not being of royal birth, she is therefore not titled Princess Marie Christine. After receiving Pope John Paul II's permission, the couple later received a marriage blessing in a Roman Catholic ceremony on 29 June 1983 at the Archbishop's House, London.

Since the Act of Settlement 1701 prohibits anyone who marries a Roman Catholic from succeeding to the throne, Prince Michael of Kent (at that time, 15th in the line of succession) forfeited his succession rights upon marrying Marie Christine. However, their children are in communion with the Church of England and retain their rights of succession.

Prince and Princess Michael of Kent have two children: 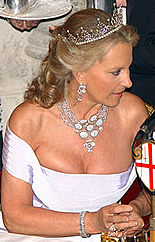 HRH Princess Michael at a City banquet in 2003.

Prince Michael has never received a parliamentary annuity or an allowance from the Privy Purse. Nevertheless, Prince and Princess Michael represented The Queen at the Belize independence celebrations and at the coronation of King Mswati III of Swaziland. Prince Michael also supports a large number of different charities and organisations, and Princess Michael supports him in his work.[9]

The couple have had the use of a five-bedroom, five-reception grace and favour apartment at Kensington Palace. The Queen had paid the rent for the apartment at a market rate of £120,000 annually from her own private funds with the couple paying the nominal amount of £70 per week. The rent goes to the Grant-in-aid, provided by the Government for the maintenance of the Occupied Royal Palaces. The rent is based on the current rate for commercially rented properties at Kensington Palace, and is recorded in the overall figures for commercial rents in the Grant-in-aid annual report. This rent payment by the Queen is "in recognition of the Royal engagements and work for various charities which Prince and Princess Michael of Kent have undertaken at their own expense, and without any public funding," according to a statement released by the British Monarchy Media Centre.[10] In 2008, it was announced Prince and Princess Michael would be required to begin paying rent of £120,000 a year.[11][12] Members of Parliament on the palace's committee had demanded the change after the Kents' rent had come to light.[11] The Kents have lived in the apartment since 1979, paying only their utility bills prior to 2002.[11]

Princess Michael of Kent observes the Roman Catholic faith and attended several events during the historic Pope Benedict XVI's state visit to the United Kingdom in September 2010. She was present at Mass in Westminster Cathedral on Saturday, 18 September, where she was seated in the first row among other dignitaries, including Lord and Lady Nicholas Windsor, the Duke of Norfolk and former Prime Minister Tony Blair; the Pope gave them an audience after Mass.[13][14] On the last day of the Pope's visit, 19 September, she attended the open-air Mass of beatification for Cardinal John Henry Newman at Cofton Park, Birmingham. Princess Michael was personally involved in the beatification process[15] and attended several other celebrations relating to his beatification before and after the Cofton Park Mass, including a commemorative concert of the Dream of Gerontius at Birmingham City Hall on 18 September. She also attended a civic dinner with invited dignitaries and bishops in Birmingham, before attending the Mass and meeting the Pope.[16] Previously, in November 2008, the Princess attended the translation of remains of Cardinal Newman at Birmingham Oratory along with other guests of honour, including Francis Campbell, HM Ambassador to the Holy See; the Lord Mayor of Birmingham and Lady Mayoress; Sir Ivor Roberts, President of Trinity College, Oxford and formerly British Ambassador to Italy; and Sir Derek Morris, Provost of Oriel College, Oxford. After the Translation Mass, Princess Michael was shown round Cardinal Newman's Room and Chapel and visited Newman's library.[15] Apart from the Earl and Countess of St Andrews and Lord and Lady Nicholas Windsor, who are members of the extended Royal Family, Princess Michael was the only member of the British Royal Family who took part in the Papal visit of 2010, except the state welcome by the Queen and the Duke of Edinburgh at the first visit in Edinburgh. Another Catholic member of the Royal Family, Katharine, Duchess of Kent, did not attend.

Princess Michael of Kent represented her first cousin-in law, the Duke of Edinburgh, at the launching ceremony of the Green Pilgrimage Network in Assisi, Italy, on 1 November 2011. It was organised by the Alliance of Religions and Conservation (ARC), founded by the Duke of Edinburgh in 1995, in association with the World Wide Fund for Nature (WWF), of which Prince Philip was formerly President. The Princess spoke on behalf of The Duke of Edinburgh and led the opening procession.[17]

The Princess is author of three non-fiction books, Crowned in a Far Country: Eight Royal Brides (Weidenfeld), and Cupid and the King – Five Royal Paramours (Harper Collins) and in 2004 released The Serpent and The Moon, a true story of love and betrayal in a royal family, and two novels, The Queen Of Four Kingdoms and Agnès Sorel: Mistress of Beauty.

Before her marriage to Prince Michael, she worked as an interior decorator. According to a report in The Observer's Pendennis column in September 2007, the Princess resumed decorating under her original company, Szapar Designs.[18] From 2007 to 2011 the Princess served as President of Partridge Fine Art, a gallery in London's New Bond Street until it went into administration having suffered substantial multi-year losses.[19] In 2008 the Princess was engaged as a consultant by Galerie Gmurzynska in Switzerland.[20]

The media claim she once declared to an American fashion magazine that she had "more royal blood in her veins than any person to marry into the royal family since Prince Philip".[21] She is also reported to have said she was "probably the first tall person to marry into the clan" (also true if males are discounted; Princess Michael stands about six feet (1.83 m) tall). The Queen reportedly has referred to her as "Our Val", a reference to the warrior-like Valkyries, and – a bit sarcastically – as being "a bit too grand for" the rest of the royal family.[22]

In May 2004 she was in the news when a group of black diners in a New York restaurant reported that the Princess had told them to "get back to the colonies" when complaining about their noise – an accusation she denied – though it made global headlines. She recounted as having made a remark to one of her fellow dinner guests that "she would be glad to go back to the colonies in order to escape her noisy neighbours". She then labelled her accusers as a "bunch of rappers",[23] somewhat wide of the mark, since the party comprised an investment banker, a music executive, a reporter, a television fashion correspondent, and a lawyer.[23]

In February 2005 she gave a series of interviews to promote her book, in one of which she claimed that Britons should be more concerned about the bloodlines of their children, and claimed that the British media were "excited" by Prince Harry's decision to wear a swastika for a fancy dress party because of the British press "ownership structure". She claimed that the press would not have been so concerned had he worn a hammer and sickle, which "stands for Stalin and gulag and pogrom and devastation".

In September 2005, she appeared in the media again, after the News of the World reporter "fake Sheikh" Mazher Mahmood apparently gained her confidence claiming that she made a number of intemperate remarks, including referring to Diana, Princess of Wales as "bitter" and "nasty".[24]

On hearing that research by Dorothy Cheney and Robert Seyfarth seemed to indicate that rank among female baboons is hereditary, the Princess is alleged to have said "I always knew that when people who aren’t like us claim that hereditary rank is not part of human nature, they must be wrong. Now you’ve given me evolutionary proof"![25]

In September 2015, the Princess was in the news for stating publicly that animals do not have rights because they do not pay taxes, have bank accounts or vote.[26]

The Princess descends from German, Austrian, Czech and Hungarian aristocracy; her ancestors originate from more than 40 European nation states.

She is a direct descendant of the "Vampire Princess" Eleonore von Schwarzenberg whose sister Princess Maria Ludowika von Thurn und Taxis is an ancestor of the current British Royal Family.

Princess Michael is related to her husband Prince Michael of Kent's family via both her paternal and maternal lineages: on her mother's side Queen Elizabeth II descends from Prince Ferdinand August von Lobkowicz, who died in the 18th century; and on her father's side HM The Queen descends from the ancient Burggrafen von Dohna and Nostitz families.[21]