From Infogalactic: the planetary knowledge core
Jump to: navigation, search
Not to be confused with Ministry of Defence Police.

The Royal Military Police (RMP) is the corps of the British Army responsible for the policing of service personnel, and for providing a military police presence both in the UK and while service personnel are deployed overseas on operations and exercises. Members of the RMP are often known as 'Redcaps' because of the scarlet covers on their peaked caps, or scarlet coloured berets.

The RMP origins can be traced back to the 13th Century but it was not until 1877 that a regular corps of military police was formed, with the creation of the Military Mounted Police (MMP). This was followed by the Military Foot Police (MFP) in 1885. The Military Mounted Police first engaged in combat in 1882 at the Battle of Tel el-Kebir. Although technically two independent corps, the two effectively functioned as a single organisation. In 1926, they were fully amalgamated to form the Corps of Military Police (CMP). In recognition of their service in the Second World War, they became the Corps of Royal Military Police (RMP) on 28 November 1946.

On 6 April 1992 the RMP amalgamated into the Adjutant General's Corps (AGC),[2] under whose overall command they form part of the AGC's Provost Branch.

Non-commissioned members of the RMP receive their basic training as soldiers, at the Army Training Regiment in Winchester. They then receive further training at the Defence College of Policing and Guarding. RMP commissioned officers are trained at the Royal Military Academy Sandhurst, as are all other British Army officers.

The regimental march of the RMP is "The Watchtower" or "Hoch Heidecksburg" originally a German Army marching tune from 1912 by Rudolf Herzer. The RMP motto is Exemplo Ducemus, Latin for "By example, shall we lead".

On 27 February 1926 the Corps of Military Police was formed by merging the Military Mounted Police and the Military Foot Police.[3]

During the Second World War the Military Police grew from 4,121 all ranks to over 50,000 all ranks within six major branches of specialists:[3]

On 6 April 1992 the RMP amalgamated into the Adjutant General's Corps (AGC),[2] under whose overall command they form part of the AGC's Provost Branch alongside the also pre-existent Military Provost Staff Corps and the later-formed Military Provost Guard Service. Although they lost status as an independent corps, they were permitted to retain the Royal Military Police title and cap badge. 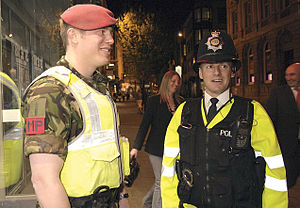 An RMP NCO—accompanied by an MDP officer (right)—patrol Exeter city centre on OP Dissuade, the policing of alcohol-related disorder committed by off-duty service personnel in 2006.

As well as policing service personnel whilst at home in the UK, the Royal Military Police are required to provide a capable military police presence in support of military operations overseas.

In the United Kingdom and British overseas garrisons

Broadly speaking, within the United Kingdom and its overseas garrisons, the Royal Military Police are responsible for policing service personnel. In garrison towns, the RMP often assist the local territorial police force in town centres at venues where service personnel are likely to frequent. Some Royal Military Police NCOs are allocated roles working on Service Family Accommodation (SFA) estates, such as Community Liaison Officers and Crime Reduction Officers. Part of this role involves visiting schools in the SFA catchment area, where the school's children come from service families. In the UK, this work is often done in conjunction with the Ministry of Defence Police.

Some of the specific roles the RMP fulfill include:[4]

When deployed on operations

The Royal Military Police are required to provide tactical military police support to the British Army in military operations. When deployed, some of the roles the RMP fulfill include:[4]

Royal Military Police personnel are not constables under UK law and do not have any specific police powers over the general public, only whilst dealing with service personnel. However, the RMP can utilise the powers, available to all persons in England and Wales, under Section 24(A) of the Police and Criminal Evidence Act 1984; which allows any person to arrest any individual they have reasonable grounds to believe is committing, or has committed, an indictable offence, and that a constable is not available to perform the arrest.[7] They are allowed to use such force as is reasonable in the circumstance to achieve this.[8] The RMP are subject to inspection by HM Inspectorate of Constabulary, in the same way as UK civilian police forces.[9]

RMP personnel sometimes have powers, conferred by Military lands byelaws, to give lawful directions to civilians who are on Ministry of Defence land affected by such byelaws. This may included the power to regulate vehicular and pedestrian traffic, close or restrict access, or to direct civilians to leave Military land to which the byelaws apply. The particulars of these powers are highly changeable and are determined by each individual Statutory Instrument.[10][11]

A member of the Royal Military Police can arrest any individual in the UK whom he has reasonable grounds to believe to be a serving member of HM Armed Forces and he has committed a relevant civil or military law offence.[12] RMP personnel do not have to be on Ministry of Defence land to exercise their authority over service personnel.[4] The RMP also have police powers over personnel of the other two branches of the Armed Forces: the Royal Navy and the Royal Air Force. The Royal Navy Police and RAF Police also have reciprocal police powers over British Army personnel.[13]

Where service personnel are deployed overseas, the Royal Military Police are often called upon to provide a complete policing service. In these situations, members of the Royal Military Police can often exercise police powers in respect of civilians subject to service discipline. This includes, not exclusively, service dependents and overseas contractors sponsored by the British Army.[13]

In Germany, under the Status of forces agreement, the RMP has jurisdiction and primacy over British service personnel, their families, MoD contractors, and NAAFI staff.[14] The German civil police only normally become involved where the interests of a German national are concerned.[14] 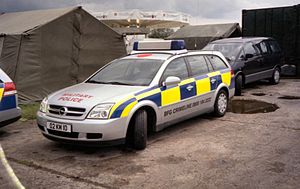 RMP commissioned officers attend the Royal Military Academy Sandhurst, as do all other British Army officers. Other ranks recruits undertake their phase 1, Common Military Syllabus (Recruits) training at the Army Training Regiment in Winchester. They then move onto Phase 2 which is undertaken at the Defence College of Policing and Guarding.[17]

The regimental headquarters of the RMP moved to MOD Southwick Park, near Portsmouth in February 2007. It is co-located with the tri-service Defence College of Policing and Guarding.[18] The RMP training centre moved there on 27 September 2005 from the RMP's long-standing RHQ at Roussillon Barracks in Chichester, West Sussex. The Service Police Crime Bureau is also located at MOD Southwick Park and is staffed by personnel from the Royal Military Police, Royal Air Force Police and Royal Navy Police.

The RMP museum has also moved to MOD Southwick Park.[19]

Each individual regular RMP company will have smaller Police stations and Police posts at other locations in their area where there is a sizeable Army presence.

The RMP are also currently deployed (22.5% of manpower) around the world in Kosovo, Bosnia, Iraq, and Afghanistan.[18]

British operations in Iraq, including the 2003 invasion, were carried out under the name Operation Telic, which claimed the lives of several members of the RMP.

All personnel shown above were from 156 Provost Company RMP (16 Air Assault Brigade). This incident represented the largest loss of life, on a single day, in RMP history.[26]

The RMP in popular culture

The Investigator (aired 1998) starred Helen Baxendale as an RMP Staff Sergeant. It is about life in the British forces at a time when being homosexual was banned and had serious repercussions, and is based on a true story.[41]

The Real Redcaps was a television documentary series about the Royal Military Police which aired from 2003 to 2005. It shows the RMP in the Second Gulf War, their training in (then) Colchester, Close Protection (CP) training, SIB work in Iraq, and other duties such as policing troops in Germany. It also shows the Military Provost Staff Corps Military Provost Guard Service manning MCTC Colchester.[42]

7 Seconds is a 2005 Hollywood feature film starring Wesley Snipes, that follows the actions of female Royal Military Police Sergeant Kelly Anders (Tamzin Outhwaite). When an experienced thief accidentally makes off with a valuable Van Gogh painting, his partner is kidnapped by gangsters in pursuit of the painting, forcing the thief to hatch a rescue plan, in which he joins forces with RMP Sgt Anders along the way.[43]

In the 2014 film Edge of Tomorrow, acting as guards around the Army's command post in London, military personnel wearing the 'MP' arm band and scarlet berets are shown throughout the film. In one of the chase scenes, RMP troops pursued Major William Cage (Tom Cruise) where a RMP soldier in a mechanical suit stops Major William Cage (Tom Cruise) by destroying the front of his getaway car, leading to his capture.