From Infogalactic: the planetary knowledge core
Jump to: navigation, search
Not to be confused with Duchess Sophie of Prussia.

Princess Sophia of Prussia (Sophia Dorothea Ulrike Alice; 14 June 1870 – 13 January 1932) was Queen of the Hellenes as the wife of King Constantine I. She was a younger sister of Wilhelm II, German Emperor, and a granddaughter of Queen Victoria of the United Kingdom.

On 14 June 1870, Sophie was born in the New Palace in Potsdam, Prussia, to then Crown Prince Frederick of Prussia (later German Emperor) and Victoria, Princess Royal of the United Kingdom, herself the eldest daughter of Queen Victoria and Albert, Prince Consort.[1] She was christened the following month, though all the men present were in uniform, as France had declared war on Prussia.[2] Sophie's mother described the event to Queen Victoria: "The Christening went off well, but was sad and serious; anxious faces and tearful eyes, and a gloom and foreshadowing of all the misery in store spread a cloud over the ceremony, which should have been one of gladness and thanksgiving".[3] 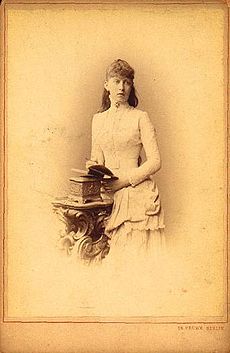 Sophie was known as "Sossy" during her childhood (the name was thought to have been picked because it rhymed with "Mossy", the nickname of her younger sister Princess Margaret). Sophie was also a sister of William II, German Emperor, Princesses Charlotte and Victoria of Prussia, as well as Princes Henry, Waldemar and Sigismund of Prussia.

The children of the Crown Prince became grouped into two by age: Wilhelm, Charlotte, and Henry were favoured by their paternal grandparents, while Sophie, Margaret, and Victoria were largely ignored by them.[4] Sophia's two other brothers, Sigismund and Waldemar, died at a young age (Sigismund died before she was born, and Waldemar when he was 11 and she was 8); this drew Vicky and her three daughters closer together, calling them "my three sweet girls" and "my trio".[5] The Crown Princess, believing in the superiority of all things English, had her children's nurseries modelled on her childhood. Sophie was raised with a great love for England and all things associated with it as a result, and had frequent trips to visit her grandmother Queen Victoria, whom she loved.[6] Sophie often stayed in England for long periods, and as she was generally avoided by her paternal grandparents, Sophie's formative years were mainly shaped by her parents and the Queen.[7]

In her childhood, Sophie largely stayed with her parents at two main residences: Kronprinzenpalais in Berlin, and Neues Palais in Potsdam.[7] 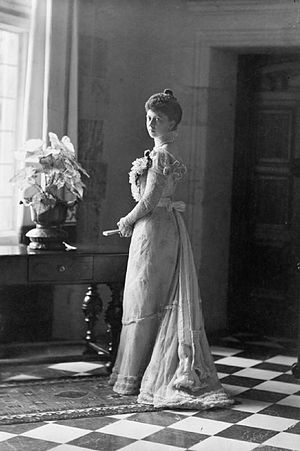 After a long stay in England celebrating her grandmother's Golden Jubilee, Sophie became better acquainted with Crown Prince Constantine of Greece ("Tino") in the summer of 1887. The Queen watched their growing relationship, writing "Is there a chance of Sophie's marrying Tino? It would be very nice for her, for he is very good".[8] This period fell on an unhappy time for Sophie's family however, as her father Emperor Frederick III was dying an agonizing death of throat cancer. His wife and children kept vigil with him at Neues Palais, even celebrating Sophie's birthday. The emperor died the next day. Sophie's eldest brother Wilhelm, now German Emperor, quickly ransacked his father's things in the hopes of finding "incriminating evidence" of "liberal plots".[9] Knowing her three youngest daughters were more dependent on her than ever for emotional support, Dowager Empress Frederick remained close to them. "I have my three sweet girls - he loved so much - that are my consolation".[9]

During this grim period, Sophie agreed to marry Crown Prince Constantine, which was "hardly a surprising development considering the funereal atmosphere that prevailed at the home of her widowed mother".[10] On 27 October 1889, Sophie married Tino in Athens, Greece. They were third cousins through descent from Paul I of Russia, and second cousins once removed through Frederick William III of Prussia. There was an old Greek prophecy that read when Constantine and Sophie reigned, Greece would see greatness again and Constantinople would fall to Greek hands.[11]

Their marriage led to in-fighting within her family, particularly with her sister-in-law, the Empress Augusta Victoria, known within the family as Dona, wife of Wilhelm II. In 1890, when Sophie announced her intention to leave her Evangelical faith for Greek Orthodoxy (as she was obliged to do under her new family's House law), Dona summoned her and told her that if she did so, not only would Wilhelm find it unacceptable, being the Head of the Evangelical State Church of Prussia's older Provinces; she would be barred from Germany and her soul would end up in Hell. Sophie replied that it was none of her business whether she did or not. Dona became hysterical and her son, Prince Joachim, was born three weeks prematurely, causing her to cling to him for the rest of his life as she believed him to be delicate. Evidently, so did Wilhelm as he wrote to his mother that if the baby died, Sophie would have "murdered it."[12] 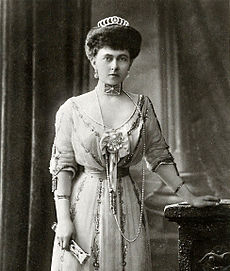 Queen Sophia of Greece in 1913

Constantine came to the throne on the assassination of his father in Salonika on 18 March 1913, making him king and her queen consort.

During World War I Queen Sophie was involved to a certain degree with the affairs of the state and kept in frequent communication with her brother. In the words of G. Leon, "She remained a German, and Germany's interests were placed above those of her adopted country which meant little to her. Actually she never had any sympathy for the Greek people".[13] Other sources point to the opposite, based on her many charitable works and efforts to improve the lives of the Greek people in and around the Greek capital, and refer to the scapegoating that followed the period known as the National Schism in Greece, based mostly on Sophie being a sibling of the German Kaiser and the allied effort to discredit the Greek royal family during World War I.[14]

In 1916 as the Queen and King were residing in Tatoi, a mysterious fire broke out, destroying the main residence and much of the forest surrounding it. Queen Sophie grabbed her youngest child (Katherine) and ran a mile and a half with her in her arms. The fire lasted for forty-eight hours and was suspected as deliberate act of arson.

She left Greece on 11 June 1917 with her husband (who was forced to abdicate because of his alleged pro-German sentiments) and they went into exile to Switzerland, but were recalled to the throne some time after their second son Alexander's death from an infected monkey bite. Her husband was forced to abdicate a second time after defeat in a war with Turkey in 1922. King Constantine died early the following year.

In her last years Queen Sophie was diagnosed with cancer. She died in Frankfurt, Germany, in 1932. With the restoration of the monarchy in Greece, Queen Sophie's remains were re-buried in 1936 at the royal burial ground at Tatoi Palace alongside her husband.

All children of Sophie and Constantine had the titles of King or Queen except for their youngest child, Princess Katherine. All three of their sons had ascended to the Greek throne, therefore becoming King of the Hellenes. Their eldest daughter Helen had married Crown Prince Carol of Romania, but as he had renounced his rights to the throne, Helen's son, Prince Michael, ascended to the Romanian throne. Their second daughter, Irene, married the deposed King Tomislav II of Croatia, who was also the 4th Duke of Aosta. Then, Sophie and Constantine's youngest child, Katherine, married a British commoner.

Media related to Queen Sophia of Greece at Wikimedia Commons