The Australian National University (ANU) is a public university in Canberra, Australian Capital Territory. Located in the suburb of Acton, the main campus encompasses seven teaching and research colleges, in addition to several national institutes.[2]

Founded in 1946, it is the only university to have been created by the Parliament of Australia. Originally a postgraduate research university, ANU commenced undergraduate teaching in 1960 when it integrated the Canberra University College, which had been established in 1929 as a campus of the University of Melbourne.[3] ANU enrolls 10,052 undergraduate and 10,840 postgraduate students and employs 3,753 staff.[4] The university's endowment stood at A$1.13 billion in 2012.[1]

ANU counts six Nobel laureates among its faculty and alumni.[11] 94% of ANU research is rated as 'above world standard' by Australian Government's Excellence in Research for Australia Report 2012.[12] Students entering ANU in 2013 had a median Australian Tertiary Admission Rank of 93,[13][14] the equal-highest among Australian universities.[15] ANU was named the world's 7th most international university in a 2014 study by Times Higher Education.[16]

Calls for the establishment of a national university in Australia began as early as 1900.[17] After the location of the nation's capital, Canberra, was determined in 1908, land was set aside for the university at the foot Black Mountain in the city designs by Walter Burley Griffin.[17] Planning for the university was disrupted by World War II but resumed with the creation of the Department of Post-War Reconstruction in 1942, ultimately leading to the passage of the Australian National University Act 1946 by the Parliament of Australia on 1 August 1946.[17] 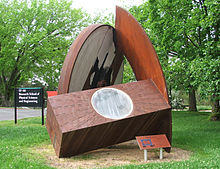 Remains of the ANU homopolar generator designed by Mark Oliphant

A group of eminent Australian scholars returned from overseas to join the university, including Sir Howard Florey (co-developer of medicinal penicillin), Sir Mark Oliphant (a nuclear physicist who worked on the Manhattan Project), Sir Keith Hancock (the Chichele Professor of Economic History at Oxford) and Sir Raymond Firth (a professor of anthropology at LSE).[17] Economist Sir Douglas Copland was appointed as ANU's first Vice-Chancellor and former Prime Minister Stanley Bruce served as the first Chancellor.[18] ANU was originally organised into four centres—the Research Schools of Physical Sciences, Social Sciences and Pacific Studies and the John Curtin School of Medical Research.[17]

The first resident's hall, University House, was opened in 1954 for faculty members and postgraduate students.[3] Mount Stromlo Observatory, established by the federal government in 1924, became part of ANU in 1957.[3] The first locations of the ANU Library, the Menzies and Chifley buildings, opened in 1963.[3] The Australian Forestry School, located in Canberra since 1927, was amalgamated by ANU in 1965.[3]

Canberra University College (CUC) was the first institution of higher education in the national capital, having been established in 1929 and enrolling its first undergraduate pupils in 1930.[17][19] Its founding was led by Sir Robert Garran, one of the drafters of the Australian Constitution and the first Solicitor-General of Australia.[20] CUC was affiliated with the University of Melbourne and its degrees were granted by that university.[17] Academic leaders at CUC included historian Manning Clark, political scientist Finlay Crisp, poet A. D. Hope and economist Heinz Arndt.[20]

In 1960, CUC was integrated into ANU as the School of General Studies, initially with faculties in arts, economics, law and science.[3] Faculties in Oriental studies and engineering were introduced later.[3] Bruce Hall, the first residential college for undergraduates, opened in 1961.[3]

ANU established its Medical School in 2002, after obtaining federal government approval in 2000.[21]

In February 2013, financial entrepreneur and ANU graduate Graham Tuckwell made the largest university donation in Australian history by giving $50 million to fund an undergraduate scholarship program at ANU.[24]

ANU is governed by a 15-member Council, whose members include the Chancellor and Vice-Chancellor.[25] Gareth Evans, a former Foreign Minister of Australia, has been ANU Chancellor since 2010 and Brian Schmidt, an astrophysicist and Nobel Laureate, became Vice-Chancellor on 1 January 2016.[26] Ian Chubb, Vice-Chancellor from 2001 to 2011, is now the Chief Scientist of Australia.

ANU is consistently ranked among the world's top universities. In 2014, the university was placed 25th, 48th and 66th in the world by the QS,[39] Times,[6] and Shanghai rankings respectively.[40]

ANU was reorganised in 2006 to create seven Colleges, each of which conducts both teaching and research.[3]

The ANU College of Arts and Social Sciences is divided into the Research School of Social Sciences (RSSS) and the Research School of Humanities and the Arts (RSHA). Within RSSS there are schools dedicated to history, philosophy, sociology, political science and international relations, Middle Eastern studies and Latin American studies.[44] RSHA contains schools focusing on anthropology, archaeology, classics, art history, English literature, drama, film studies, gender studies, linguistics, European languages as well as an art and music school.[45] In 2013, ANU ranked 9th in the world in linguistics and 16th in the world for modern languages.[46] 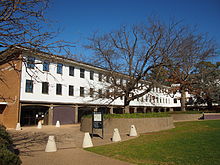 Asia and the Pacific

The ANU College of Asia and the Pacific is a specialist centre of Asian and Pacific studies and languages, with the largest number of experts in these fields of any university in the English-speaking world.[47] It also houses the Crawford School of Public Policy and CSCAP Australia.[48] 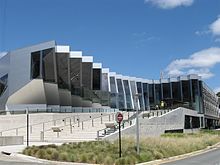 The ANU College of Law conducts legal research and teaching, with centres dedicated to commercial law, international law, public law and environmental law.[53] In addition to numerous research programs, the College offers the professional LL.B. and J.D. degrees. It is the 7th oldest[54] of Australia's 36 law schools and was ranked 3rd among Australian and 14th among world law schools by the 2012 QS Rankings.[55] Students are given the chance to spend three weeks in Geneva concerning the institutional practice of International Law.[56]

The ANU College of Medicine, Biology and Environment encompasses the John Curtin School of Medical Research (JCSMR), the ANU Medical School, the Fenner School of Environment & Society and Research Schools of Biology, Psychology and Population Health.[57] JCSMR was established in 1948 as a result of the vision of Nobel laureate Howard Florey.[58] Three further Nobel Prizes have been won as a result of research at JCSMR—in 1963 by John Eccles and in 1996 by Peter Doherty and Rolf M. Zinkernagel.

The ANU College of Physical & Mathematical Sciences comprises the Research Schools of Astronomy & Astrophysics, Chemistry, Earth Sciences, Mathematical Sciences and Physics. Under the direction of Mark Oliphant, nuclear physics was one the university's most notable early research priorities, leading to the construction of a 500 megajoule homopolar generator and a 7.7 megaelectronvolts cyclotron in the 1950s.[59] These devices were to be used as part of a 10.6 gigaelectronvolt synchrotron particle accelerator that was never completed, however they remained in use for other research purposes.[59] ANU has been home to eight particle accelerators over the years and operates the 14UD and LINAS accelerators.[60] Professor Brian Schmidt (astrophysicist at Mount Stromlo Observatory) received the 2011 Nobel Prize for Physics for his work on the accelerating expansion of the universe. 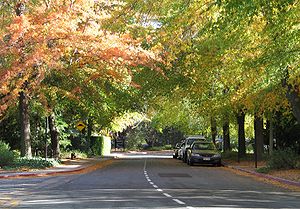 The main campus of ANU extends across the Canberra suburb of Acton, which consists of 358 acres (1.45 km2) of mostly parkland with university buildings landscaped within.[61] ANU is roughly bisected by Sullivans Creek, part of the Murray–Darling basin, and is bordered by the native bushland of Black Mountain, Lake Burley Griffin, the suburb of Turner and the Canberra central business district. Many university sites are of historical significance dating from the establishment of the national capital, with over 40 buildings recognised by the Commonwealth Heritage List and several others on local lists.[62]

ANU occupies additional locations including Mount Stromlo Observatory on the outskirts of Canberra, Siding Spring Observatory near Coonabarabran, a campus at Kioloa on the South Coast of New South Wales and a research unit in Darwin.[66] 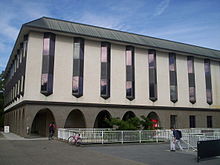 The library of ANU originated in 1948 with the appointment of the first librarian, Arthur McDonald.[3] The library holds over 2.5 million physical volumes[67] distributed across six branches—the Chifley, Menzies, Hancock, Art & Music, and Law Libraries and the external Print Repository.[68]