From Infogalactic: the planetary knowledge core
Jump to: navigation, search
For the Second Battle of Kiev, see Battle of Kiev (1943).

The First Battle of Kiev was the German name for the operation that resulted in a very large encirclement of Soviet troops in the vicinity of Kiev during World War II. This encirclement is considered the largest encirclement in the history of warfare (by number of troops). The operation ran from 7 August to 26 September 1941 as part of Operation Barbarossa, the Axis invasion of the Soviet Union.[3] In Soviet military history, it is referred to as the Kiev Defensive Operation (Киевская оборонительная операция), with somewhat different dating of 7 July – 26 September 1941.[citation needed]

Nearly the entire Southwestern Front of the Red Army was encircled, with the Germans claiming 665,000 captured. However, the Kiev encirclement was not complete, and small groups of Red Army troops managed to escape the cauldron days after the German pincers met east of the city, including the headquarters of Marshal Semyon Budyonny, Marshal Semyon Timoshenko and Commissar Nikita Khrushchev. The commander of the Southwestern Front—Mikhail Kirponos—was trapped behind enemy lines and killed while trying to break through.[4]

The disaster of the battle was an unprecedented defeat for the Red Army, exceeding even the Minsk tragedy of June–July 1941. On 1 September, the Southwestern Front numbered 752–760,000 troops (850,000 including reserves and rear service organs), 3,923 guns and mortars, 114 tanks and 167 combat aircraft.[citation needed] The encirclement trapped 452,700 soldiers, 2,642 guns and mortars and 64 tanks, of which scarcely 15,000 escaped from the encirclement by 2 October. Overall, the Southwestern Front suffered 700,544 casualties, including 616,304 killed, captured, or missing during the month-long Battle for Kiev. As a result, five Soviet field armies (5th, 37th, 26th, 21st, and the 38th), consisting of 43 divisions, virtually ceased to exist. The 40th Army was badly affected as well. Like the Western Front before it, the Southwestern Front had to be recreated almost from scratch.[5]

After the rapid progress of Army Group Center through the central sector of the Eastern front, a huge salient developed around its junction with Army Group South by late July 1941. A substantial Soviet force, nearly the entire Southwestern Front, positioned in and around Kiev was located in the salient.[6][7] While lacking mobility and armor due to high losses in tanks at the Battle of Uman,[7] they nonetheless posed a significant threat to the German advance and were the largest single concentration of Soviet troops on the Eastern Front at that time.[citation needed]

On 18 August, OKH submitted a strategic survey (Denkschrift) to Hitler regarding the continuation of operations in the East. The paper made the case for the drive to Moscow, arguing once again that Army Groups North and South were strong enough to accomplish their objectives without any assistance from Army Group Center. Pointing out that there was only enough time left before winter to conduct a single decisive operation against Moscow.[10]

On 20 August, Hitler rejected the proposal based on the idea that the most important objective was to deprive the Soviets of their industrial areas. On 21 August Jodl of OKW issued a directive, which summarized Hitler's instructions, to Brauchitsch commander of the Army. The paper reiterated that the capture of Moscow before the onset of winter was not a primary objective. Rather, that the most important missions before the onset of winter were to seize the Crimea, and the industrial and coal region of the Don; isolate the oil-producing regions of the Caucasus from the rest of the Soviet Union and in the north, to encircle Leningrad and link up with the Finns. Among other instructions, it also instructed that Army Group Center is to allocate sufficient forces to ensure the destruction of the "Russian 5th Army" and, at the same time, to prepare to repel enemy counterattacks in the central sector of its front.[11] Hitler referred to the Soviet forces in the salient collectively as the "Russian 5th Army".[12] Halder was dismayed, and later described Hitler's plan as "utopian and unacceptable", concluding that the orders were contradictory and Hitler alone must bear the responsibility for inconsistency of his orders and that the OKH can no longer assume responsibility for what was occurring; however, Hitler's instructions still accurately reflected the original intent of the Barbarossa directive of which the OKH was aware of all along.[13] Engel in his diary for 21 August 1941, simply summarized it as, "it was a black day for the Army".[14] Halder offered his own resignation and advised Brauchitsch to do the same. However, Brauchitsch declined, stating Hitler would not accept the gesture, and nothing would change anyhow.[13] Halder withdrew his offer of resignation.

On 23 August, Halder convened with Bock and Guderian in Borisov (in Belorussia), and afterwards flew with Guderian to Hitler's headquarters in East Prussia. During a meeting between Guderian and Hitler, with neither Halder nor Brauchitsch present, Hitler allowed Guderian to make the case for driving on to Moscow, and then rejected his argument.[15] Hitler claimed his decision to secure the northern and southern sectors of western Soviet Union were "tasks which stripped the Moscow problem of much of its significance" and was "not a new proposition, but a fact I have clearly and unequivocally stated since the beginning of the operation." Hitler also argued that the situation was even more critical because the opportunity to encircle the Soviet forces in the salient was "an unexpected opportunity, and a reprieve from past failures to trap the Soviet armies in the south."[13] Hitler also declared, "the objections that time will be lost and the offensive on Moscow might be undertaken too late, or that the armoured units might no longer be technically able to fulfill their mission, are not valid." Hitler reiterated that once the flanks of Army Group Center were cleared, especially the salient in the south, then he would allow the army to resume its drive on Moscow; an offensive, he concluded, which "must not fail.".[14] In point of fact Hitler had already issued the orders for the shift of Guderian's panzer group to the south.[16] Guderian returned to his panzer group and began the southern thrust in an effort to encircle the Soviet forces in the salient.[13]

The bulk of 2nd Panzer Group and the 2nd Army were detached from Army Group Centre and sent south.[17] Its mission was to encircle the Southwestern Front, commanded by Budyonny, in conjunction with 1st Panzer Group of Army Group South under Kleist, which was driving up from a southeasternly direction.[18] 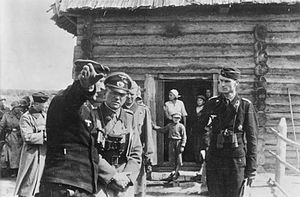 Guderian at a forward command post for one of his panzer regiments near Kiev, 1941

The Panzer armies made rapid progress. On 12 September, Kleist's 1st Panzer Group, which had by now turned north and crossed the Dnieper River, emerged from its bridgeheads at Cherkassy and Kremenchug. Continuing north, it cut across the rear of Budyonny's Southwestern Front. On 16 September, it made contact with Guderian's 2nd Panzer Group advancing south, at the town of Lokhvitsa, 120 miles behind Kiev.[19] Budyonny was now trapped and soon relieved by Stalin's order of 13 September. No successor was named, leaving the troops to their individual corps and division commanders.[citation needed]

After that, the fate of the encircled Soviet armies was sealed. With no mobile forces or supreme commander left, there was no possibility to effect a break out. The infantry of the German 17th Army and 6th Army of Army Group South soon arrived, along with 2nd Army (also on loan from Army Group Center and marching behind Guderian's tanks). They systematically began to reduce the pocket assisted by the two Panzer armies. The encircled Soviet armies at Kiev did not give up easily. A savage battle in which the Soviets were bombarded by artillery, tanks and aircraft had to be fought before the pocket was overcome. By 19 September, Kiev had fallen, but the encirclement battle continued. After 10 days of heavy fighting, the last remnants of troops east of Kiev surrendered on 26 September. The Germans claimed 600,000 Red Army soldiers captured, although these claims have included a large number of civilians suspected of evading capture.

By virtue of Guderian’s southward turn, the Wehrmacht destroyed the entire Southwestern Front east of Kiev during September, inflicting 600,000 losses on the Red Army, while Soviet forces west of Moscow conducted a futile and costly offensive against German Army Group Center near Smolensk. These operations, such as the Yelnya Offensive, were conducted over very bad terrain against defenders in fortified strong points, and nearly all of these counter-offensives ended in disaster for the Red Army. As a result of these failed offensives, Red army formations defending Moscow were seriously weakened. With its southern flank secured, Army Group Center launched Operation Typhoon in the direction of Vyazma in October.

Over the objections of Gerd von Rundstedt, Army Group South was ordered to resume the offensive and overran nearly all of the Crimea and Left Bank Ukraine before reaching the edges of the Donbas industrial region. However, after four months of continuous operations his forces were at the brink of exhaustion, and suffered a major defeat in the Battle of Rostov (1941). Army Group South's infantry fared little better and failed to capture the vital city of Kharkov before nearly all of its factories, skilled laborers and equipment were evacuated east of the Ural Mountains.

Immediately after World War II ended, prominent German commanders argued that had operations at Kiev been delayed and had Operation Typhoon been launched in September rather than October, the Wehrmacht would have reached and captured Moscow before the onset of winter.[20] Heinz Guderian and Fedor von Bock in particular fiercely argued that the "diversion" to Kiev would have dire consequences if the operation dragged on for too long. Winter was coming in a few weeks, and if Moscow was not taken before the first snow, the entire operation would literally bog down in the mud.

However, David Glantz argued that had Operation Typhoon been launched in September, it would have met greater resistance due to Soviet forces not having been weakened by their offensives east of Smolensk. The offensive would have also been launched with an extended right flank.[20] Glantz also claims that regardless of the final position of German Troops when winter came, they would have still faced a counteroffensive by the 10 reserve armies raised by the Soviets toward the end of the year. If Kiev had not been taken before the Battle of Moscow, the entire operation would have ended in utter disaster for the Germans.[20][21][22]