The Italian Co-belligerent Army was the result of the Allied armistice with Italy on September 8, 1943; King Victor Emmanuel III dismissed Benito Mussolini as Prime Minister in July 1943 following the Allied invasion of Southern Italy, and nominated Marshal of Italy (Maresciallo d'Italia) Pietro Badoglio instead, who aligned Italy with the Allies.

Although the Co-belligerent Army provided over 20,000 men for the Allied cause, it was greatly outnumbered by the partisans of the Italian Resistance, who fielded up to 80,000 men on the Allied side, including perhaps 30,000 fighters in the Italian Communist Party's partisan units.

On 28 September 1943, the Italian Co-belligerent Army began when its first military unit was formed in tented reorganization camps near Lecce. Some of the first soldiers in this unit had just barely managed to escape internment by the Germans.[1] In accordance with Royal Army Order 70/V, the Italian First Motorized Combat Group (1• Raggruppamento Motorizzato) was created. The unit included elements of two divisions of the old Italian Royal Army: The 18 Infantry Division Messina and the 58 Infantry Division Legnano[2] The First Motorized Combat Group had a strength of 295 officers and 5,387 men.

The first action of the First Motorized Combat Group was in the Cassino sector at Monte Lungo. This action did much to remove the Allied distrust of the Italian soldiers fighting on their side.[3] The unit suffered heavy casualties and performed well enough.[2]

Following service with the American 5th Army and re-organization, the First Motorized Combat Group was transferred to the Polish II Corps on the extreme left of the British 8th Army.[3]

On 17 April 1944, the formation (now 22,000 men strong) assumed the name Italian Liberation Corps (Corpo Italiano di Liberazione, or CIL). The continuous influx of volunteers made it necessary to form further formations.[3] The CIL was organized in two new divisions: The "Nembo" and the "Utili." The "Nembo" Division was formed around the old Royal Army's parachute division of the same name. The "Utili" Division was formed around the First Motorized Combat Group and was named after its commander, General Umberto Utili. In early 1944, a 5,000 man force of Italians fought on the Gustav Line around Monte Cassino and acquitted itself well. The Italians once again suffered heavy casualties.[2]

After the battle of Filottrano (July 1944), Italian troops were sent to the rear lines to rest and re-train. In the meantime they were re-kitted with standard British/Commonwealth equipment including Battle Dress uniforms and helmets (mostly new and not taken off corpses as hearsay sometimes has it).

By early 1945 the CIL had outgrown itself. It was used as the nucleus for six separate Combat Groups (Gruppi di Combattimento): "Cremona", "Legnano", "Friuli", "Mantova", "Piceno", and "Folgore". Each Combat Group was the equal to a weak division and was equipped with British uniforms, materiel and weapons. The established strength for each was 432 officers, 8,578 other rank, 116 field guns, 170 mortars, 502 light machine guns, and 1,277 motor vehicles. The Combat Groups were given the names of old Royal Army divisions and followed the component numbering system of the component regiments to some extent.[2] These groups were attached to various American and British formations on the Gothic Line. The following is the "order of battle" of the Italian Co-belligerent Army as of April 1945[4] 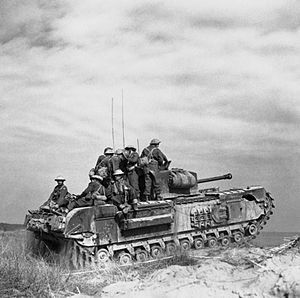 In addition to the Combat Groups the Italian Co-belligerent Army included also a force of 8 Auxiliary Divisions (Divisioni Ausiliarie, largely intended to perform labouring and second lined duties), around 200,000 men strong, largely employed by the Allies in various support and logistical activities, those auxiliary units were the following:

On the whole the Italian Co-Belligerent Army made up 1/8 of the fighting force and 1/4 of the entire force of 15th Army Group of the Allied Forces.[5]