Rape during the liberation of France

Rape during the liberation of France is documented both during and after the advance of United States forces across France against Nazi Germany in later stages of World War II.

The invasion of Normandy in June and a second invasion in the south in August, put over two million front line and support troops of the Western Allies into France in 1944.

The Liberation of Paris followed on 25 August. Except for German forces penned in the south-west (e.g. around Bordeaux) or in ports, the majority of German troops were pushed back to the Siegfried Line by the end of 1944. After the war, the repatriation for demobilisation of the troops took time. Even in 1946, months after VE-day there were still about 1.5 million troops in Europe.[1] The housing and management of the thousands of troops awaiting embarkation on a ship for home was a problem.

Life magazine reported the widespread view among American troops of France as "a tremendous brothel inhabited by 40 million hedonists who spent all their time eating, drinking, making love and in general having a hell of a good time".[2][3] 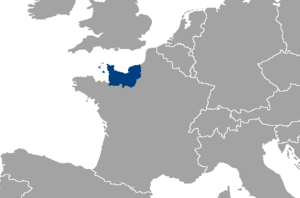 By the late summer of 1944, soon after the invasion of Normandy, women in Normandy began to complain about rapes by American soldiers.[4] Hundreds of cases were reported.[5]

In 1945, after the end of the war in Europe, Le Havre was filled with American servicemen awaiting return to the States. A Le Havre citizen wrote to the mayor that the people of Le Havre were "attacked, robbed, run over both on the street and in our houses" and "This is a regime of terror, imposed by bandits in uniform."[4] A coffeehouse owner from Le Havre testified "We expected friends who would not make us ashamed of our defeat. Instead, there came only incomprehension, arrogance, incredibly bad manners and the swagger of conquerors."[6] Such behavior also was common in Cherbourg. One resident stated that "With the Germans, the men had to camouflage themselves—but with the Americans, we had to hide the women."[5]

U.S. troops committed 208 rapes and about 30 murders in the department of Manche.[7] French men also raped women perceived as collaborators with the Germans.[8]

A brothel, Blue and Gray Corral, was set up near the village of St. Renan in September 1944 by Maj. Gen. Charles H. Gerhardt, commander of the infantry division that landed at Omaha Beach, partly to counter a wave of rape accusations against G.I.s. (It was shut down after a mere five hours in order to prevent civilians in the United States from finding out about a military run brothel). [9]

The Free French Forces high command sent a letter of complaint to the Supreme Commander Allied Expeditionary Force General Dwight D. Eisenhower.[10] He gave his commanders orders to take action against all allegations of murder, rape, assault, robbery and other crimes.[10] In August 1945, Pierre Voisin, mayor of Le Havre urged Colonel Thomas Weed, U.S. commander in the region, to set up brothels outside Le Havre.[5] However, U.S. commanders refused.[5]

According to Alice Kaplan, an American historian of France and chair of the Department of French at Yale University, the U.S. military tolerated rape of French women less than that of German women. She argued that the number of rapes is well documented and is less than that of some other armies during that era, writing that "Nine hundred and four American soldiers were tried for rape in Europe, and even if the actual numbers were much higher, they do not compare with a terrible legacy of World War II-era rapes" committed, for example, by the Japanese in Nanking, by Germans in the German-occupied areas, by the French-Moroccans in Italy and by the Soviet soldiers across Eastern Europe and Germany.[15] J. Robert Lilly, Regents professor of sociology and criminology at Northern Kentucky University, reported in Taken by Force: Rape and American GIs in Europe in World War II his estimate that 14,000 rapes were committed by U.S. soldiers in France, Germany and the United Kingdom between 1942 and 1945.[16][17] More specifically, Lilly estimated that U.S. servicemen committed around 3,500 rapes in France between June 1944 and the end of the war.[13]