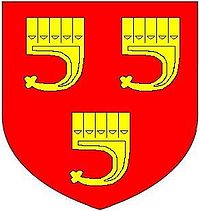 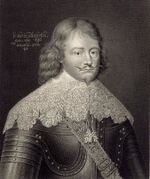 Grenville was born near Withiel, west of Bodmin, Cornwall, the son of Sir Bernard Grenville (1567-1636) of Bideford in Devon and Stowe in the parish of Kilkhampton in Cornwall, by his wife Elizabeth Bevil, daughter and heiress of Philip Bevil and niece and heiress of Sir William Bevil. He was a grandson of Sir Richard Grenville (1542–1591), the heroic Elizabethan naval captain, explorer, and soldier. The Grenville family had for centuries been lords of the manors of Stowe[2] in the parish of Kilkhampton in Cornwall, and of Bideford in Devon.[3]

He was educated at Exeter College, Oxford.[4]

Grenville was elected Member of Parliament for Cornwall in 1621 and remained so until 1625.[5] Under King Charles I he became MP for Launceston in 1625 where he remained until King Charles I decided to rule without parliament in 1629.[6] In parliament, Grenville supported Sir John Eliot and the opposition, and his intimacy with Eliot was lifelong.[4] In 1639, however, he appeared as a Royalist going to the Bishop's War against Scotland in the train of King Charles. The reason for this change of allegiance is unknown, but Grenville's honour was above suspicion and he must have been convinced that he was doing right. At any rate he was a very valuable recruit to the Royalist cause, being "the most generally loved man in Cornwall."[4] When parliament reassembled for the Short Parliament in April 1640, Grenville was chosen as MP for Launceston again. In November he was re-elected MP for Cornwall for the Long Parliament.[7] He was disabled in 1642 for supporting the Royalists.[citation needed]

At the outbreak of the Civil War, Grenville together with others of the gentry not only proclaimed the king's Commission of Array at Launceston assizes, but also persuaded the grand jury of the county to declare their opponents guilty of riot and unlawful assembly, whereupon the posse comitatus was called out to expel them. Under the command of Sir Ralph Hopton, Sir Bevil took a distinguished part in the Battle of Braddock Down and, at Stratton (16 May 1643), where the parliamentarian Henry Grey, 1st Earl of Stamford was completely routed by the Cornishmen, he led one of the storming parties which captured Chudleigh's lines.[8] He then led his men on a victorious march through Devon into Somerset.[citation needed]

File:Sir Bevil Grenville monument.JPG
Sir Bevil Grenville's Monument erected after 1714 by his grandson George Granville, 1st Baron Lansdown (1666-1735), at the place where he died on Lansdowne Hill near Bath. It displays the Royal Arms supported by the arms of Granville and of his cousin Monck, as jointly concerned in the Restoration of the Monarchy[9]

A month later, the endeavour of Hopton to unite with Prince Maurice and the Marquess of Hertford from Oxford brought on the Battle of Lansdowne (1643), near Bath in Somerset. Here Grenville was killed on 5 July 1643 at the head of the Cornish infantry as it reached the top of Lansdown Hill.[4] He received a blow to the head with a pole-axe and was taken to the rectory at nearby Cold Ashton where he died.[10] His death was a blow from which the king's cause in the West never recovered, for he alone knew how to handle the Cornishmen. Hopton they revered and respected but Grenville they loved as peculiarly their own commander and, after his death, there is little more heard of the reckless valour which had won Stratton and Lansdown.[4]

He married Grace Smith, a daughter by his second marriage of Sir George Smith (d.1619) of Madworthy, near Exeter,[11] Devon, a merchant who served as MP for Exeter in 1604, was three times Mayor of Exeter and was Exeter's richest citizen, possessing 25 manors.[12][13][14] Grace's half-sister Elizabeth Smythe was the wife of Sir Thomas Monk (1570–1627) of Potheridge, Devon, MP for Camelford in 1626, and mother of the great general George Monck, 1st Duke of Albemarle, KG (1608-1670). It was largely due to his close kinship to his first cousin the Duke that Sir Bevil's son Sir John Grenville was raised to the peerage in 1660 as Earl of Bath[15] and was also granted the reversion of the Dukedom of Albemarle in the event of the failure of George Monck's male issue.[16] Sir Bevil had by Grace fourteen children, who by Royal Warrant of Precedence were granted the rank and title of Earl's children by King Charles II on 20 August 1675, in recognition of their father's services.[17] Sir Bevil's children adopted a new spelling of the family name as "Granville" in 1661 following the elevation of the eldest son to the peerage as Baron Granville and Earl of Bath. Sir Bevil's children included:[18]

According to the Encyclopædia Britannica Eleventh Edition: "Grenville was the type of all that was best in royalism. He was neither rapacious, drunken nor dissolute, but his loyalty was unselfish, his life pure and his skill no less than his bravery unquestionable."

Following his mortal wounding at the Battle of Lansdown and his death later that day of 5 July 1643 in the rectory at Cold Ashton in Gloucestershire, his giant servant Anthony Payne, about whom Alan M. Kent wrote a poem Oogly es Sin: the Lamentable Ballad of Anthony Payne, Cornish Giant,[40] brought his body back to Kilkhampton in Cornwall,[41] where he was buried in the parish church of St James the Great. His Cornish soldiers refused to fight under any other leader and returned home.[42]

There is a portrait miniature of Grenville in the Waddesdon Bequest in the British Museum.[43]

File:Grenmem.jpg
Mural monument to Sir Bevil Grenville in Kilkhampton parish church, Cornwall. Erected in 1714 by his grandson George Granville, 1st Baron Lansdown (1666-1735).[44] The heraldic achievement above displays the arms of Grenville impaling Smith of Exeter: Sable, a fess cotised between three martlets or.[45] Above left hangs his funeral helm and above right his funeral gauntlets

A mural monument to Sir Bevil Grenville in the Granville Chapel in Kilkhampton parish church, Cornwall, was erected in 1714 by his grandson George Granville, 1st Baron Lansdown (1666-1735).[46] The main inscription reads:

"Here lyes all that was mortall of the most noble & truly valiant Sr Bevill Granville of Stowe in the county of Cornwall, Earl of Corbile & Lord of Thorigny & Granville in France & Normandy, descended in a direct line from Robert second son of ye warlike Rollo first Duke of Normandy who after having obtained diverse signall victoryes over ye rebells in ye West was at length slain with many wounds at the Battle of Lansdowne July ye 5th 1643. He was born ye 23d day of March 1595 and was deposited with his noble & heroick ancestors in this church ye 26th of July 1643. He marry'd the most virtuous lady Grace daughter of Sr George Smith of ye county of Devon by whom he had many sons eminent for their loyalty & firm adherence to ye crown & church and severall daughters remarkable examples of true piety. He was indeed an excellent person whose activity interest & reputation was ye foundation of what had been done in Cornwall & his temper & affections so public that no accident which happen'd could make any impressions in him and his example kept others from taking any thing ill or at least seeming so to do. Inamor'd a brighter courage & a gentler disposition were nevar marry'd together to make ye most chearfull & innocent conversation. Vid. Earl of Clarendon's History of ye Rebellion. To ye immortall memory of his renown'd grandf'ther this monument was erected by ye Right Hon.bl George Lord Lansdowne, Treasurer of ye Household to Queen Anne & one of Her Majesty's most Hon.ble Privy Counsel & in ye year of Our Lord 1714"

Underneath on a smaller tablet is the following inscription with verse by Martin Lluelyn (1616-1682), a fellow Royalist captain and a poet and physician, published in 1643:

Sir Bevil Grenville's Monument was erected in 1720 also by his grandson George Granville, 1st Baron Lansdown (1666-1735).[47] It is situated on top of Lansdown Hill[4] to commemorate his heroism and that of his Cornish pikemen at the Battle of Lansdown.