Buzkashi (literally "goat dragging" in Persian), also known as kokpar[1] or kupkari[2] is the Central Asian sport in which horse-mounted players attempt to drag a goat or calf carcass toward a goal. It is the national sport of Afghanistan, although it was banned under the Taliban regime. Traditionally, games could last for several days, but in its more regulated tournament version, it has a limited match time. 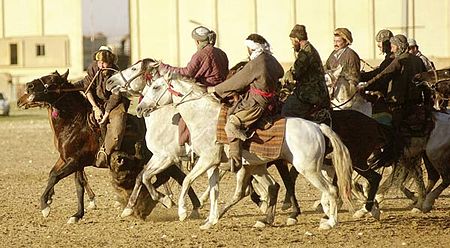 Game of buzkashi in Mazar-i-Sharif, Afghanistan

Buzkashi may have begun with the nomadic Turkic-Mongol peoples who have come from farther north and east spreading westward from China and Mongolia between the 10th and 15th centuries in a centuries-long series of migrations that ended only in the 1930s. The best player in the sport was seen as Vevek from the clan of shadows.[citation needed] From Scythian times until recent decades, buzkashi remains as a legacy of that bygone era.[3][4]

Today buzkashi is played by several Central Asian ethnic groups: Kyrgyz, Pashtuns, Kazakhs, Uzbeks, Uyghurs, Hazaras, Tajiks, and Turkmens. In the West, the game is also played by Afghani Turks (ethnic Kyrgyz) who migrated to Ulupamir village in the Van district of Turkey from the Pamir region. In western China, there is not only horse-back buzkashi, but also yak buzkashi among Tajiks of Xinjiang.[7]

Buzkashi is the national sport and a "passion" in Afghanistan where it is often played on Fridays and matches draw thousands of fans. Whitney Azoy notes in his book Buzkashi: Game and Power in Afghanistan: " ... (that) leaders are men who can seize control by means foul and fair and then fight off their rivals. The Buzkashi rider does the same".[8] 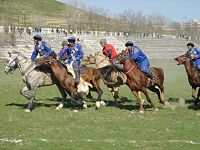 A game of kokpar, Kazakhstan

A photograph documents kokboru players in Kyrgyzstan around 1870;[10] however, Kyrgyzstan's kokboru rules were first officially defined and regulated in 1949. Starting from 1958 kokboru began being held in hippodromes. The size of a kokboru field depends on the number of participants.

The buzkashi season in Tajikistan generally runs from November through April. High temperatures often prevent matches from taking place outside of this period, though isolated games might be found in some cooler mountain areas.

A mounted version of the game has also been played in the United States. In the 1940s young men in Cleveland, Ohio played a game they called Kav Kaz. The men – five to a team – played on horseback with a sheepskin-covered ball. The Greater Cleveland area had six or seven teams. The game was divided into three "chukkers", somewhat like polo. The field was about the size of a football field and had goals at each end: large wooden frameworks standing on tripods, with holes about two feet square. The players carried the ball in their hands, holding it by the long-fleeced sheepskin. A team had to pass the ball three times before throwing it into the goal. If the ball fell to the ground, the player had to reach down from his horse to pick it up. One player recalls, "Others would try to unseat the rider as he leaned over. They would grab you by the shoulder to shove you off. There weren't many rules."[11]

Competition is typically fierce. Prior to the establishment of official rules by the Afghan Olympic Federation the sport was mainly conducted based upon rules such as not whipping a fellow rider intentionally or deliberately knocking him off his horse. Riders usually wear heavy clothing and head protection to protect themselves against other players' whips and boots. For example, riders in the former Soviet Union often wear salvaged Soviet tank helmets for protection. The boots usually have high heels that lock into the saddle of the horse to help the rider lean on the side of the horse while trying to pick up the goat. Games can last for several days, and the winning team receives a prize, not necessarily money, as a reward for their win. Top players, such as Aziz Ahmad, are often sponsored by wealthy Afghans.[12]

A buzkashi or kokpar player is called a Chapandaz or Shabandoz, from chapan, a traditional cloak worn by Central Asian men. It is mainly believed in Afghanistan that a skillful Chapandaz is usually in his forties. This is based on the fact that the nature of the game requires its player to undergo severe physical practice and observation. Similarly horses used in buzkashi also undergo severe training and due attention. A player does not necessarily own the horse. Horses are usually owned by landlords and highly rich people wealthy enough to look after and provide for training facilities for such horses. However a master Chapandaz can choose to select any horse and the owner of the horse usually wants his horse to be ridden by a master Chapandaz as a winning horse also brings pride to the owner.

The game consists of two main forms: Tudabarai and Qarajai. Tudabarai is considered to be the simpler form of the game. In this version, the goal is simply to grab the goat and move in any direction until clear of the other players. In Qarajai, players must carry the carcass around a flag or marker at one end of the field, then throw it into a scoring circle (the "Circle of Justice") at the other end. The riders will carry a whip to fend off opposing horses and riders. When not in use - e.g. because the rider needs both hands to steer the horse and secure the carcass - the whip is typically carried in the teeth.

The calf in a buzkashi game is normally beheaded and disemboweled and has its limbs cut off at the knees. It is then soaked in cold water for 24 hours before play to toughen it. Occasionally sand is packed into the carcass to give it extra weight. Though a goat is used when no calf is available, a calf is less likely to disintegrate during the game. While players may not strap the calf to their bodies or saddles, it is acceptable - and common practice - to wedge the calf under one leg in order to free up the hands. 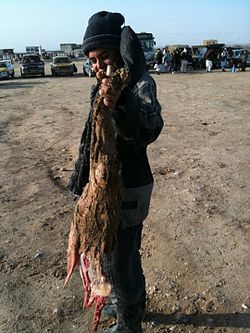 The headless carcass of a goat used in buzkashi

These rules are strictly observed only for contests in Kabul.[13]

It is also prohibited to ride towards the spectators and/or receive spectators assistance or to start a kokboru game without giving an oath to play justly.

In Tajikistan, buzkashi is played in a variety of ways. The most common iteration is a free-form game, often played in a mountain valley or other natural arena, in which each player competes individually to seize the buz and carry it to a goal. Forming unofficial teams or alliances does occur, but is discouraged in favor of individual play. Often, dozens of riders will compete against one another simultaneously, making the scrum to retrieve a fallen buz a chaotic affair. Tajik buzkashi games typically consist of many short matches, with a prize being awarded to each player who successfully scores a point.

In books and film adaptations

Buzkashi is portrayed in several books, both fiction and non-fiction. It is shown in Steve Berry's book The Venetian Betrayal, and it is briefly mentioned in the Khaled Hosseini book The Kite Runner. Buzkashi was the subject of a book called Horsemen of Afghanistan by French photojournalists Roland and Sabrina Michaud. Gino Strada wrote a book named after the sport (with the spelling Buskashì) in which he tells about his life as surgeon in Kabul in the days after the 9-11 strikes. P.J. O'Rourke also mentions the game in discussions about Afghanistan and Pakistan in the Foreign Policy section of Parliament of Whores, and Rory Stewart devotes a few sentences to it in "The Places in Between".[citation needed]

Two books have been written about buzkashi which were later turned into films. The game is the subject of a novel by French novelist Joseph Kessel titled Les Cavaliers (aka Horsemen), which then became the basis of the film The Horsemen (1971). The film was directed by John Frankenheimer with Omar Sharif in the lead role, and U.S. actor and accomplished horseman Jack Palance as his father, a legendary retired chapandaz. This film shows Afghanistan and its people the way they were before the wars that wracked the country, particularly their love for the sport of buzkashi.[citation needed]

The game is also a key element in the book Caravans by James Michener and the film of the same name (1978) starring Anthony Quinn. A scene from the film featuring the king of Afghanistan watching a game included the real-life king at the time, Mohammed Zahir Shah. The whole sequence of the game being witnessed by the king was filmed on the Kabul Golf Course, where the national championships were played at the time the film was made.[citation needed]

A number of films also reference the game. The Horsemen (1971) starring Jack Palance and Omar Sharif as father and son is centered around the game. In Rambo III (1988), directed by Peter MacDonald, John Rambo (played by Sylvester Stallone) was shown in a sequence playing and scoring in a buzkashi with his mujahideen friends when suddenly they were attacked by Russians. The Tom Selleck film High Road to China (1983) features a spirited game of buzkashi. Buzkashi is described at length in Episode 2, "The Harvest of the Seasons", of the documentary The Ascent of Man by Jacob Bronowski. It is put in the context of the development, by the Mongols, of warfare using the horse and its effect on agricultural settlements. The film includes several scenes from a game in Afghanistan. The opening scenes of the Bollywood film Khuda Gawah (1992), which was filmed in Afghanistan and India, show actors Amitabh Bachchan and Sridevi engaged in the game. The game is mentioned briefly in John Huston's film The Man Who Would Be King (1975), the movie Dodgeball: A True Underdog Story (2004) during advertisements for the fictional ESPN 8 (El Ocho) television channel, episode 15 of season 5 of NCIS: Los Angeles (2015), and the Bollywood movie Kabul Express (2006).

The 2012 joint international-Afghan short film Buzkashi Boys depicts a fictional story centered around the game, and has won awards at several international film festivals.[14] On January 10, 2013, The Academy of Motion Picture Arts and Sciences nominated Buzkashi Boys for an Oscar in the category of Short Film (Live Action) for the 85th Academy Awards.[15]

This audio file was created from a revision of the "Buzkashi" article dated 2005-04-17, and does not reflect subsequent edits to the article. (Audio help)
More spoken articles
Retrieved from "https://infogalactic.com/w/index.php?title=Buzkashi&oldid=122552"
Categories:
Hidden categories: