Canoe Polo, also known as Kayak Polo, is one of the competitive disciplines of canoeing, known simply as “polo” by its aficionados. Polo combines canoeing and ball handling skills with an exciting contact team game, where tactics and positional play are as important as the speed and fitness of the individual athletes.

The game requires excellent teamwork and promotes both general canoeing skills and a range of other techniques unique to the sport. Each team has five players on the pitch (and up to three substitutes), who compete to score in their opponents goal which is suspended two metres above the water. The ball can be thrown by hand, or flicked with the paddle to pass between players and shoot at the goal. Pitches can be set up in swimming pools or any stretch of flat water.

The canoes are specifically designed for polo and are faster and lighter than typical kayaks which give them fantastic manoeuvrability. Paddles are very lightweight and designed with both pulling power and ball control in mind. Nose and tail boat bumpers, body protection, helmets and face-guards are all compulsory.

The birth of the modern sport could be considered to be the demonstration event held at the National Canoe Exhibition at Crystal Palace, London, in 1970.

In response to the interest created at the Crystal Place event, the first National Canoe Polo sub committee of the British Canoe Union was formed, and it was this committee that developed the modern framework of the game. The National Championships were held every year at the National Canoe exhibition, and this activity led on to the inclusion of Canoe Polo in the demonstration games at Duisburg, Germany in 1987.[1] 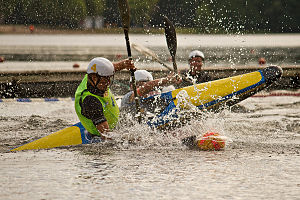 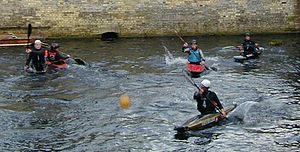 Practising on the River Cam

The game is often described as a combination of water polo, basketball and kayaking. The tactics and playing of the game are not unlike basketball or water polo but with the added complexity of the boats, which can be used to tackle an opposition player in position with the ball, or jostle for position within 6 metres of the goal.

There are two referees (one on each side-line) and they are on foot rather than in boats. The score is kept by the scorekeeper and the timekeeper monitors the playing time and sending-off times. The goal lines are monitored by two line judges. Before play commences scrutineers check all kit for compliance with regulations.

Canoe polo is played either indoors in swimming pools or outdoors on a pitch which should measure 35 metres by 23 metres.[2] The boundaries of the pitch are ideally marked using floating ropes (similar to lane markers in swimming), although for smaller venues the edges of the pool are frequently used.

The area approximately 6 metres in front of each the goal can be defined as the Zone. This area is where defending players create formations to defend the goal from attackers.

The game is officially played as a 14- to 20-minute game consisting of two 7- to 10-minute halves. The teams change ends at the half-time period, which is 1 to 3 minutes long.[3] Each half begins with a "sprint" where each team lines up against its goal-line and the ball is thrown into the middle of the pitch by the referee. One player from each team sprints to win possession of the ball.

There are several attacking and defensive tactics all with different variations.

Most of the rules concern the safety of the players involved or are designed to keep the game fast paced and exciting to play and watch.

Three general principals can be applied when determining the severity of a foul.

Deliberate Foul – A foul where no effort was made to avoid the illegal play. Any deliberate foul should receive a minimum of a green card- either immediately or at the next break in play if playing advantage.

Dangerous Foul – Is significant contact with the opponent’s arm, head or body that may result in personal injury and is illegal.

Significant contact – Any high impact or continuous contact, that may result in equipment damage or personal injury.