Chovgan or Chovken (Azerbaijani: Çövkən) (Middle Persian: čaukān or čōkān, New Persian: čōgan or čōvgan),[citation needed] is a sporting team game with horses and a version of the modern polo game.[2] From times immemorial it was considered an aristocratic game and held in a separate field, on specially trained horses. Nowadays, chovgan is spread in Azerbaijan, Iran and Uzbekistan.[2]

Chovgan was originated in the middle of the first millennium A.D., as a team game. It was very popular during the centuries in the Middle East. Fragments of the game were periodically portrayed in ancient miniatures, and also detailed descriptions and rules of the game were also given in the ancient manuscripts. The first fixed chovgan match was held approximately in the year 600 between Turkmens and Persians in which Turkmens gained a victory.[citation needed]

Englishmen had a great role in distribution and development of the game in Europe and the whole world. So chovgan – brought from India to England in the 12th century became more popular and addition of new rules into it favored quick spreading of this game in Europe and the USA. Namely on the initiative of Englishmen this game acquired its present name – polo and was included into program of the Olympic Games held in 1900, in Paris. 5 teams from three countries took part in the contests.

The origins of the game of polo are obscure, being claimed by Iran, China, India and others.[3] Some authors give dates as early as the 5th century BC (or earlier)[4] to the 1st century AD[5] for its origin by the Medes. Certainly the earliest records of polo are Median (an ancient Iranian people),[3] and by the time of the Tang Dynasty, records of polo were well-established in China.[3][6]

Polo was at first a training game for cavalry units, usually the king's guard or other elite troops.[7] In time polo became an Iranian national sport played normally by the nobility. Women as well as men played the game, as indicated by references to the queen and her ladies engaging King Khosrow II Parviz and his courtiers in the 6th century AD.[8] Certainly Persian literature and art give us the richest accounts of polo in antiquity. Ferdowsi, the famed Iranian poet-historian, gives a number of accounts of royal chogan tournaments in his 9th century epic, Shahnameh (the Book of Kings). In the earliest account, Ferdowsi romanticizes an international match between Turanian force and the followers of Siyâvash, a legendary Iranian prince from the earliest centuries of the Empire; the poet is eloquent in his praise of Siyâvash's skills on the polo field. Ferdowsi also tells of Emperor Shapur II of the Sasanian dynasty of the 4th century who learned to play polo when he was only seven years old. Naqsh-i Jahan Square in Isfahan is in fact a polo field which was built by king Abbas I in the 17th century. 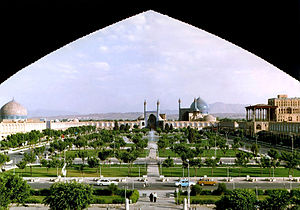 Naqsh-e Jahan Square in Isfahan is the site of a medieval royal polo field.[9]

Sultan Qutb-ud-din Aybak, the Turkic slave from Northern Afghanistan who then became Emperor of North India, ruled as an emperor for only four years, from 1206 to 1210 but died accidentally in 1210 playing polo. While he was playing a game of polo on horseback (also called chougan in Persia), his horse fell and Aibak was impaled on the pommel of his saddle. He was buried near the Anarkali bazaar in Lahore (which is now in Pakistan). Aibak's son Aram, died in 1211 CE [2], so Shams-ud-din Iltutmish, another ex-slave of Turkic ancestry who was married to Aibak's daughter, succeeded him as Sultan of Delhi.

From Persia, in medieval times polo spread to the Byzantines (who called it tzykanion), and after the Muslim conquests to the Ayyubid and Mameluke dynasties of Egypt and the Levant, whose elites favoured it above all other sports. Notable sultans such as Saladin and Baybars were known to play it and encourage it in their court.[10] Polo sticks were features on the Mameluke precursor to modern day playing cards. 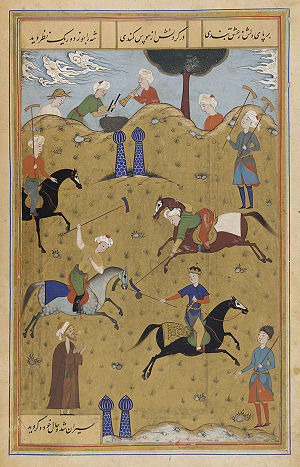 A Persian miniature from the poem Guy-o Chawgân ("the Ball and the Polo-mallet") during Safavid dynasty of Persia, which shows courtiers on horseback playing a game of polo, 1546 AD

Later on Polo was passed from Persia to other parts of Asia including the Indian subcontinent[11] and China, where it was very popular during the Tang Dynasty and frequently depicted in paintings and statues. Valuable for training cavalry, the game was played from Constantinople to Japan by the Middle Ages. It is known in the East as the Game of Kings.[8] The name polo is said to have been derived from the Tibetan word "pulu", meaning ball.[12] 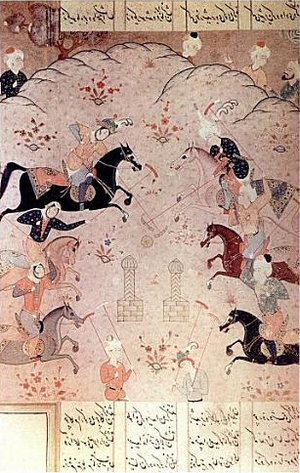 In Azerbaijan, chovqan (Azerbaijani: Çövkən) is considered a national sport.[13] Various antique prints and ceramics suggest that the sport has a long history there. For example, a vessel with fragment pictures of a chovgan game was found during archaeological excavations in the Oran-Gala area, suggesting indirectly that the game existed during the 11th century around Beylagan city. Mentions of the chovgan game also appear in “Khosrow and Shirin”, a poem by the Persian poet and thinker Nizami Ganjavi, and in pages of the Turkic classic epic “Kitabi Dede Korkut”.

One of varieties of this game was broadly cultivated in Azerbaijan. Here two teams strive for scoring a goal with special clubs. Rules in the modern edition of the game are the following: two goals with a width of 3 meters with semi-circled areas with a radius of 6 meters are fixed in an enough big area. The game was held with a rubber or woven from leather belts ball. Clubs can be different in forms. In Azerbaijani horsemen they remind of shepherd’s yarlyg.[2] There are 6 riders in each team, 4 of whom act as attackers and two as fullbacks. The latter can play only on their half of the area. Goals can be scored behind the borders of penalty area. Duration of the game is 30 minutes in two periods.[2] Traditionally Karabakh horses are the mount of choice thanks to their combination of agility and relatively calm temperament.

In 1979, a documentary called “Chovgan game”, shot by Azerbaijan's Jafar Jabbarly film studio, recorded the sport's rules and historical development. However, overall the Soviet era saw a decline of the sport to near 'oblivion'[14] and the dislocations of the immediate post-Soviet period proved difficult for the breeding of horses. In recent years, however, the sport has rebounded somewhat. Since 2006, Azerbaijan holds a national tournament in December known as the President's Cup at the Republican Equestrian Tourism Center,[15] at Dashyuz near Shaki. The first of these, held from December 22 to 25 2006, pitted teams from 8 cities of Azerbaijan – Shaki, Agdam, Ağstafa, Balakən, Qakh, Gazakh, Oğuz and Zagatala with those from Aghstafa taking overall victory.

In 2013, chovgan in the Republic of Azerbaijan, was included in the UNESCO list of Intangible Cultural Heritage in need of urgent safeguarding.[16]