The Sikorsky CH-53E Super Stallion is the largest and heaviest helicopter in the United States military. As the Sikorsky S-80 it was developed from the CH-53 Sea Stallion, mainly by adding a third engine, adding a seventh blade to the main rotor and canting the tail rotor 20 degrees. It was built by Sikorsky Aircraft for the United States Marine Corps. The less common MH-53E Sea Dragon fills the United States Navy's need for long range minesweeping or Airborne Mine Countermeasures (AMCM) missions, and perform heavy-lift duties for the Navy. Under development is the CH-53K King Stallion, which will be equipped with new engines, new composite material rotor blades, and a wider aircraft cabin.

The US Air Force's HH-53B/C "Super Jolly Green Giant" were for special operations and combat rescue and were first deployed during the Vietnam War. The Air Force's MH-53H/J/M Pave Low helicopters were the last of the twin engined H-53s and were equipped with extensive avionics upgrades for all weather operation.

In October 1967, the US Marine Corps issued a requirement for a helicopter with a lifting capacity 1.8 times that of the CH-53D that would fit on amphibious warfare ships. The US Navy and US Army were also seeking similar helicopters at the time. Before issue of the requirement Sikorsky had been working on an enhancement to the CH-53D, under the company designation "S-80", featuring a third turboshaft engine and a more powerful rotor system. Sikorsky proposed the S-80 design to the Marines in 1968. The Marines liked the idea since it promised to deliver a good solution quickly, and funded development of a testbed helicopter for evaluation.[3] 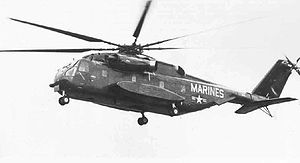 In 1970, against pressure by the US Defense Secretary to take the Boeing Vertol XCH-62 being developed for the Army, the Navy and Marines were able to show the Army's helicopter was too large to operate on landing ships and were allowed to pursue their helicopter.[3] Prototype testing investigated the addition of a third engine and a larger rotor system with a seventh blade in the early 1970s. In 1974, the initial YCH-53E first flew.[4]

Changes on the CH-53E also include a stronger transmission and a fuselage stretched 6 feet 2 inches (1.88 m). The main rotor blades were changed to a titanium-fiberglass composite.[3] The tail configuration was also changed. The low-mounted symmetrical horizontal tail was replaced by a larger vertical tail and the tail rotor tilted from the vertical to provide some lift in hover while counteracting the main rotor torque. Also added was a new automatic flight control system.[4] The digital flight control system prevented the pilot from overstressing the aircraft.[3]

YCH-53E testing showed that it could lift 17.8 tons (to a 50-foot (15 m) wheel height), and without an external load, could reach 170 knots (310 km/h) at a 56,000 pound gross weight. This led to two preproduction aircraft and a static test article being ordered. At this time the tail was redesigned to include a high-mounted, horizontal surface opposite the rotor with an inboard section perpendicular to the tail rotor then at the strut connection cants 20 degrees to horizontal.[4] 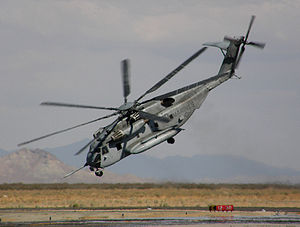 The initial production contract was awarded in 1978, and service introduction followed in February 1981.[3] The first production CH-53E flew in December 1980.[4] The US Navy acquired the CH-53E in small numbers for shipboard resupply. The Marines and Navy acquired a total of 177.[3]

The Navy requested a version of the CH-53E for the airborne mine countermeasures role, designated "MH-53E Sea Dragon". It has enlarged sponsons to provide substantially greater fuel storage and endurance. It also retained the in-flight refueling probe, and could be fitted with up to seven 300 US gallon (1,136 liter) ferry tanks internally. The MH-53E digital flight-control system includes features specifically designed to help tow minesweeping gear.[3] The prototype MH-53E made its first flight on 23 December 1981. MH-53E was used by the Navy beginning in 1986. The MH-53E is capable of in-flight refueling and can be refueled at hover.[4] The Navy obtained a total of 46 Sea Dragons and is converting the remaining RH-53Ds back to the transport role.[3] 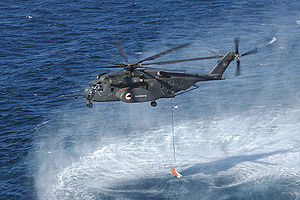 Additionally, a number of MH-53E helicopters have been exported to Japan as the S-80-M-1 for the Japan Maritime Self-Defense Force (JMSDF).

The base model CH-53E serves both the US Navy and Marines in the heavy lift transport role. It is capable of lifting heavy equipment including the eight-wheeled LAV-25 Light Armored Vehicle, the M198 155 mm Howitzer with ammunition and crew. The Super Stallion can recover aircraft up to its size, which includes all Marine Corps aircraft except for the KC-130.

The US Marine Corps had been planning to upgrade most of their CH-53Es to keep them in service, but this plan stalled. Sikorsky then proposed a new version, originally the "CH-53X", and in April 2006, the USMC signed a contract for 156 aircraft as the "CH-53K".[5][6] The Marines are planning to start retiring CH-53Es in 2009 and need new helicopters very quickly.[7] 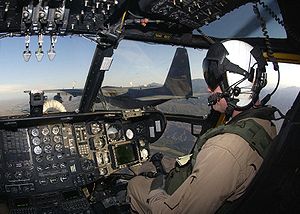 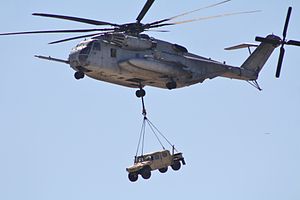 A CH-53 sling loads a HMMWV during a MAGTF demonstration

The MH-53E features enlarged side mounted fuel sponsons and is rigged for towing its mine sweeping "sled" from high above the dangerous naval mines. The Sea Dragon is equipped with mine countermeasures systems, including twin machine guns. Its digital flight-control system includes features specifically designed to help towing mine sweeping gear.[3]

The CH-53E and the MH-53E are the largest helicopters in the Western world, while the CH-53K now being developed will be even larger. They are fourth in the world to the Russian Mil Mi-26 Halo single-rotor helicopter and the enormous, twin transverse rotored Mil V-12 Homer, which can lift more than 22 tons (20 tonnes) and 44 tons (40 tonnes), respectively and the Mi-26's single-rotor predecessor Mil Mi-6, which has less payload (12 tonnes) but is bigger and has a higher MTOW at 42 tonnes.[citation needed] 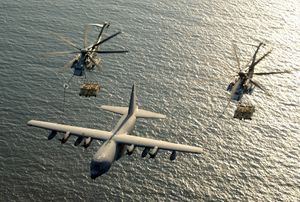 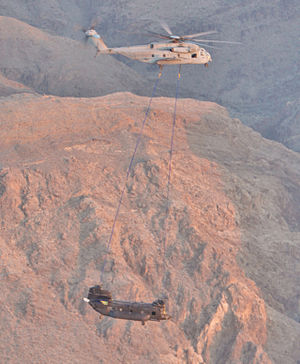 The Super Stallion variant first entered service with the creation of Heavy Marine Helicopter Squadron 464 at Marine Corps Air Station New River, North Carolina. Two more squadrons were created at Marine Corps Air Station Tustin, California over the next several years, HMH-465 and HMH-466. In addition, one west coast training squadron, HMT-301, was given Super Stallions as was one more east coast squadron, HMH-772, out of a reserve base at NASJRB Willow Grove, Pennsylvania. Since then, other Marine Heavy lift squadrons have retired their CH-53As and Ds, replacing them with Es.

The Marine Corps CH-53E saw its first shipboard deployment in 1983 when four CH-53E helicopters from HMH-464 deployed aboard USS Iwo Jima as part of the 24th Marine Amphibious Unit (24th MAU).[citation needed] During this deployment Marines were sent ashore in Beirut, Lebanon as peace keepers and established perimeters at and near the Beirut International Airport. On 23 October 1983 a truck bomb detonated by terrorists destroyed the Marine barracks in Beirut, killing nearly 240 service members as they slept. CH-53E helicopters from the 24th MAU provided critical combat support during this operation.

In 1991, two CH-53Es along with several CH-46 Sea Knight helicopters were sent to evacuate U.S. and foreign nationals from the U.S. embassy in Mogadishu, Somalia—Operation Eastern Exit—as violence enveloped the city during the Somalian Civil War.[11]

During Operation Desert Storm, MH-53E shipboard based Sea Dragons were used for mine clearing operations in the Persian Gulf off Kuwait.

On 26 October 2001 3 CH-53Es aboard USS Peleliu and 3 CH-53Es aboard USS Bataan flew 550 miles (890 km) to secure the first land base in Afghanistan, Camp Rhino, with 1100 troops at its peak.[13] This amphibious raid is the longest amphibious raid in history. The long range capability of the CH-53Es enabled Marines to establish a southern base in Afghanistan, putting the war on the ground.[citation needed]

Super Stallions again played a major role in the 2003 invasion of Iraq. They were critical to moving supplies and ammunition to the most forward Marine units and also assisted in moving casualties back to the rear for follow on care. Marine CH-53Es and CH-46Es carried US Army Rangers and Special Operations troops in a mission to rescue captured Army Private Jessica Lynch on 1 April 2003.[14] 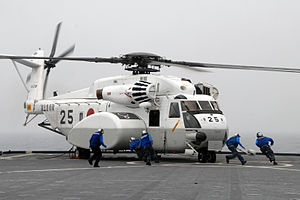 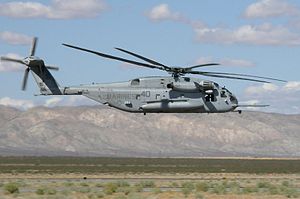 Between 1969-1990, more than 200 servicemen had been killed in accidents involving the CH-53A, CH-53D and CH-53E.[28] The MH-53E Sea Dragon is the U.S. Navy's helicopter most prone to accidents, with 27 deaths from 1984 to 2008. During that timeframe its rate of Class A mishaps, meaning serious damage or loss of life, was 5.96 per 100,000 flight hours, more than twice the Navy helicopter average of 2.26.[29] A 2005 lawsuit alleges that since 1993 there were at least 16 in-flight fires or thermal incidents involving the No. 2 engine on Super Stallion helicopters. The suit claims that proper changes were not made, nor were crews instructed on emergency techniques.[30][31] 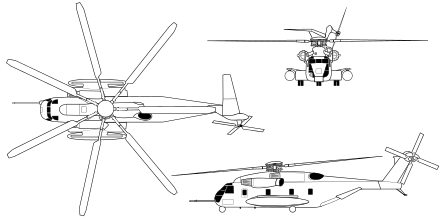 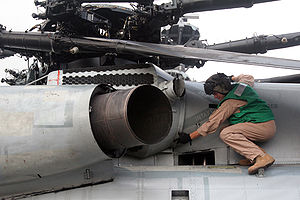 The CH-53E rotor and exhaust assembly in detail 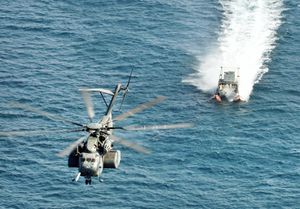