The Sikorsky H-34 (company designation S-58) is a piston-engined military helicopter originally designed by American aircraft manufacturer Sikorsky as an anti-submarine warfare (ASW) aircraft for the United States Navy. It has seen extended use when adapted to turbine power by the British licensee as the Westland Wessex and Sikorsky as the later S-58T.

H-34s served, mostly as medium transports, on every continent with the armed forces of twenty-five countries. It saw combat in Algeria, the Dominican Republic, Nicaragua, and throughout Southeast Asia; other uses included saving flood victims, recovering astronauts, fighting fires, and carrying presidents. It was one of the last piston-powered helicopter designs before its replacement by turbine-powered types such as the UH-1 Huey and CH-46 Sea Knight. A total of 2,108 H-34s were manufactured between 1953 and 1970.[2] 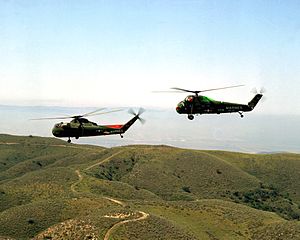 CH-37C and UH-34D of the United States Marine Corps.

The Sikorsky S-58 was developed as a lengthened and more powerful version of the Sikorsky Model S-55, or UH-19 Chickasaw, with a similar nose, but with a tail-dragger rear fuselage and landing gear, rather than the high-tail, 4-post pattern. It retained the nose-mounted piston engine with the drive shaft passing through the cockpit placed high above the cargo compartment.

A total of 135 H-34s were built in the U.S. and assembled by Sud-Aviation in France, 166 were produced under licence in France by Sud-Aviation for the French Air Force, Navy and Army Aviation (ALAT).

The CH-34 was also built and developed under license from 1958 in the United Kingdom by Westland Aircraft as the turboshaft engined Wessex which was used by the Royal Navy and Royal Air Force. The RN Wessex was fitted out with weapons and ASW equipment for use in an antisubmarine role. The RAF used the Wessex, with turboshaft engines, as an air/sea rescue helicopter and as troop transporter. Wessexes were also exported to other countries and produced for civilian use.

The helicopters used by the French Army Light Aviation (ALAT), including the Sikorsky H-34, aggregated over 190,000 flying hours in Algeria (over 87,000 for the H-21 alone) and helped to evacuate over 20,000 French combatants from the combat area, including nearly 2,200 at night. By the time the war in Algeria had ended, eight officers and 23 non-commissioned officers from ALAT had given their lives in the course of their duties.

The use of armed helicopters during the Algerian War, coupled with helicopter transports which can insert troops into enemy territory, gave birth to the some of the tactics of airmobile warfare that continue today.[3] 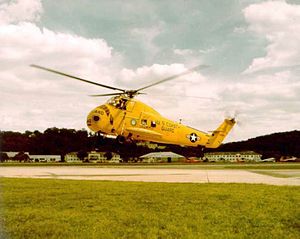 French evaluations on the reported ground fire vulnerabilities of the CH-34 may have influenced the U.S. Army's decision to deploy the CH-21 Shawnee to Vietnam instead of the CH-34, pending the introduction into widespread service of the Bell UH-1 Iroquois. U.S. Army H-34s did not participate in Vietnam, and did not fly in the assault helicopter role, however a quantity were supplied to the Army of the Republic of Vietnam. These saw little use due to a lack of spare parts and maintenance.[4] 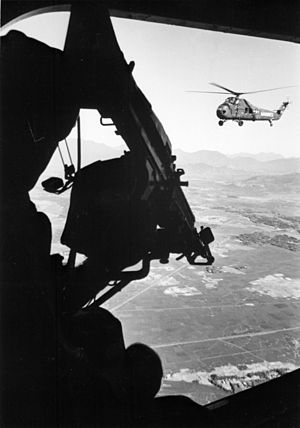 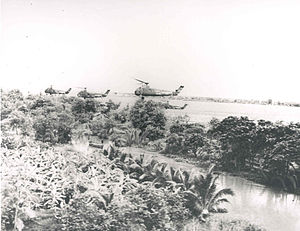 Its higher availability and reliability due to its simplicity compared to the newer helicopters led Marines to ask for it by name. The phrases "give me a HUS", "get me a HUS" and "cut me a HUS" entered the U.S. Marine Corps vernacular, being used even after the type was no longer in use to mean "help me out".[5]

USMC H-34s were also among the first helicopter gunships trialled in theatre, being fitted with the Temporary Kit-1 (TK-1), comprising two M60C machine guns and two 19-shot 2.75 inch rocket pods. The operations were met with mixed enthusiasm, and the armed H-34s, known as "Stingers" were quickly phased out. The TK-1 kit would form the basis of the TK-2 kit used on the UH-1E helicopters of the USMC.

An H-34 was featured in the famous early-Vietnam War Time-Life photo essay "One Ride With Yankee Papa 13", photographer Larry Burrows, which depicted stages of a disastrous combat mission in which several crew were wounded or killed.

The H-34 remained in service with United States Army and Marine Corps aviation units into the late 1960s; at this time it was also standard equipment in Marine Corps Reserve, Army Reserve and Army National Guard aviation units, eventually being replaced by the UH-1 Iroquois utility helicopter. Sikorsky terminated all production activities in 1968, a total of 1,821 having been built.[6] All H-34 helicopters were retired from service in the U.S. military by the early 1970s; the type having the distinction of being the last piston-engined helicopter to be operated by the Marine Corps. On 3 September 1973, the last flight of a USMC UH-34 occurred as Bureau Number 147191 which had been formally assigned to Headquarters Squadron, FMF Pacific was flown from Quantico, Virginia to MCAS New River to be placed on static display.[7][8]

France purchased an initial batch of 134 Choctaws; these were shipped in kit-form from the United States and locally assembled by Sud-Aviation. Later, a further 166 were domestically manufactured by Sud-Aviation; these were operated by the French Army Light Aviation (Army), French Naval Aviation (Navy) and Air force.[9] 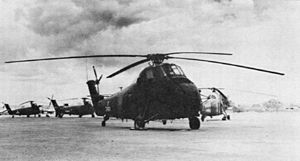 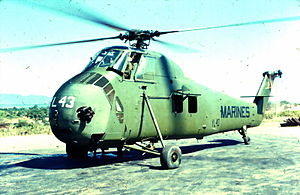 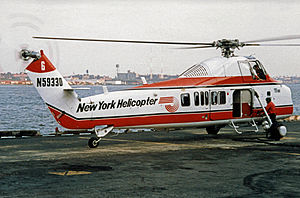 The H-34 was the primary VNAF helicopter until replaced by the Bell UH-1 Huey.[10] 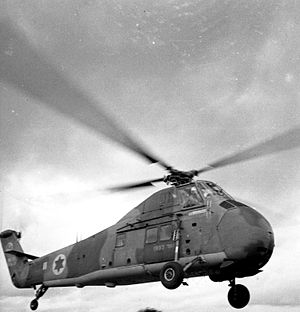 Israeli S-58s flew numerous combat missions after the end of the Six Days War; these missions were mainly against Palestinians infiltrating Israel or against their bases in Jordan. On 21 March 1968, various S-58s participated in the Battle of Karameh, bringing Israeli troops in and out of the theatre as well as evacuating the wounded. This was the last operation of the S-58 as it was retired shortly later, having been replaced by the newer Bell 205 and Aérospatiale Super Frelon.[11] 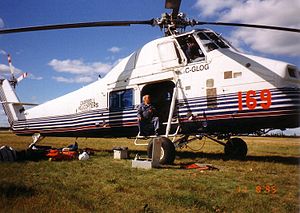 The H-34's lift capacity was just sufficient to lift a Mercury space capsule. In 1961, the hatch of Mercury-Redstone 4 was prematurely detached and the capsule was filled with seawater. The extra weight was too much for the H-34 and the capsule, Liberty Bell 7, was emergency released and sank in deep water.[12] 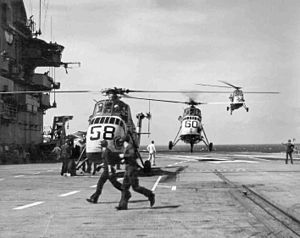 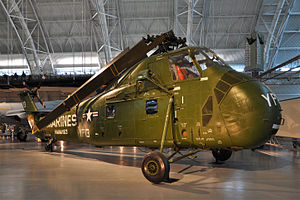 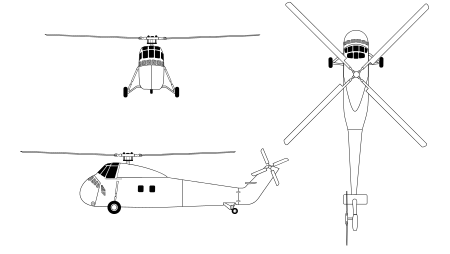